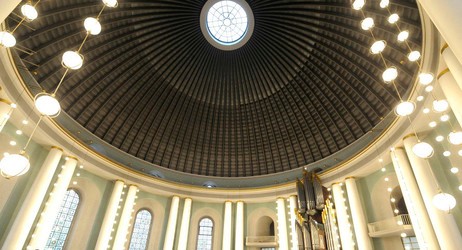 When I came out in my church I was 16 and still wearing ascots for ties. I was a mop of hair looking for guidance in the faith that had given me a home. I chose to be a Baptist because of its overt grounding in community and its personalism over the Latin coldness of my mother’s Catholicism. Being a Baptist was a call to dance, and there can’t be a revolution without dancing.

Then I was called into the Pastor’s office. He gave me a choice. I could choose either my “desires” or my religion. The church could never be a home for my perversion.

But it wasn’t just God’s flock that was after me. God himself was waiting for me—with a sniper rifle. The Pastor told me about the high rates of HIV, depression, suicide and death from drug use in the gay community as empirical evidence of divine wrath.

“God’s waiting to cut you down,” he claimed. “And he’ll get you eventually, when you least expect it.”

I left the church, where I’d been renowned for my poetry. I even placed in a national competition for it, but I felt like that voice would never be heard. I hugged the people who loved me goodbye, the ones who vocally supported my coming out. They felt like I could make a difference.

However, the pastor’s hate spoke louder. I wasn’t strong enough yet to let Him hate me, so I gave him up. I closed the door.

A new movement is working to tear down the barriers to entry for those who have been excluded from the church and told they didn’t fit the definition of God’s love. God Is Not a Bully is a video project in which LGBTQ people share the message that “God is love, not hate” by telling their personal experiences of religion and finding embrace for exactly who they are, all of it.

“I know that the bullying rhetoric of religion and of people in power in the Church has a devastating effect on queer people,” Cathy Knight, the project’s Executive Director, said. “Young people in particular look up to clergy folks, believe what they say as authority as they develop their own belief system. When clergy espouse that LGBTQ people are an abomination and a sin, that message is internalized. The shame and heartache begins.”

For Knight, this speaks to her own journey as a person of faith, where she and many of her friends struggled with the pain that comes from feeling like you have nowhere to belong.

“I attended United Methodist Churches for years, hearing the annual sermon that I was a sinner because of my sexual orientation," Knight said. “The confusion of the message and how I felt about myself had to be numbed out. I turned to drugs to stay sane. I was a drug addict, but I kept going to church.”

She found spiritual guidance by discovering a congregation that affirmed multiplicity of identities, where she could be an out lesbian who also followed the message of Jesus Christ. Knight believes that there’s an internal struggle within the church right now toward opening the doors and closing the windows, where the Pope can say that atheists can be good people and go to heaven but the institution of the church retracts it.

“It’s hard to change something that often doesn’t want to change,” Knight said.

God Is Not a Bully doesn’t hope to change religion, but provide a resource for its queer followers.

Anna DeShawn, the founder of E3 Radio and a collaborator on the project, says that many single out queer people for marginalization by highlighting the Clobber scriptures—or the Bible verses devoted to condemning homosexuality—and taking a literal interpretation.

“They’re used to control people,” DeShawn said. “If we did that for every verse in the Bible, we wouldn’t eat meat and we would be sacrificing sons.”

DeShawn hopes that sharing the stories will challenge the restrictive messages of hate and reclaim God by changing the conversation.

“We embarked upon this project to uplift and encourage young people who are struggling with their sexuality and their faith,” DeShawn said. “The stories that have been shared are real and my hope is that the message will touch the hearts of those that watch."

In a video on the project's website, Emily McConnell discusses her own personal understanding of religion as a child, inspired by her diverse upbringing.

Instead McConnell understood God as “universal” and his love as “extending to those of all kinds.”

“Any kind of sexuality [is] a gift from God,” she argued.

You can find McConnell’s story along with those of others on the God Is Not a Bully website. The campaign will post videos throughout the month of June for pride month.

Their videos won’t open every window to religion. But for queer religious people struggling in the dark like I was, they offer some much needed light.