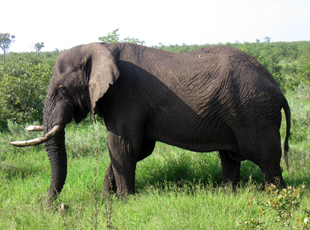 Earlier this summer, Al Gini had the opportunity to spend six weeks in South Africa, and has put together a few reflective pieces on his experiences there.

Africa may not be the seat of all of western civilization, but it is the site of the birth of human kind and it is the repository of the fossil remains of our earliest ancestors. The African continent is now generally recognized as the main birthplace of the human group. Life did develop elsewhere, but Africa is where the spark was ignited and the flame persisted and spread.

This year my wife and I spent 20 days in the bush. Each day was very much like the other, but no two days were completely alike. It was never boring, always beautiful and, sometimes, overwhelming in its sights and sounds. Each day was a gift. The bush is alive around the clock. During the day the wildebeests honk their presence to one and all. Zebras snort and stomp to make themselves heard. Elephants trumpet to each other constantly. But it is at night that the real symphony begins. Between the cicadas’ piercing shrill, the throaty growl of the cheetahs, the snarling semi-laughter of the hyenas and the roar of the lions, the night is a cacophony of sounds and rhythms that fascinates me.

On any given day as we drove through the bush in our Land Cruisers we saw: herds of cape buffaloes; a journey of giraffes; thousands of wildebeest; a dazzle of zebras; gazelle and antelope of every size, shape and color; large families of elephants; a crash of rhinos; a raft of hippopotami; large congresses of baboons; an occasional leap of leopards; and 20-foot long crocodiles that seem to be part of our prehistoric past. It never seemed to stop. It never ceased to amaze me!

Sometimes, it’s hard to see the face of God in our fellow humans. But stare an elephant in the eye, or a plump hippo, or a graceful impala, or a clumsy but cute flamingo, and I, for one, saw — if not God’s face — at least her signature in her handiwork.

I awoke on our last morning in the bush — out of sorts, ill-at-ease, angry and melancholic. I was missing Africa already. Africa, for me, is more than an exotic, unusual destination. It is more than a vacation, or just something different to do. Africa is a gift! It is a dream. An experience I will never take for granted.

The very first line of Isak Dinesen’s memoir Out of Africa reads: “I had a farm in Africa, at the foot of the Ngon Hills.” If I were writing my memoirs now, perhaps my opening line would be: “I once had a safari in Africa, and nothing since has ever been the same!” Happily, since that first safari, my wife and I have been able to go back 10 more times. And each time we go back the magic is there again, just like the first time.