A decade has passed since the Soldier Field renovation was completed.
The propriety (and $600 million expense) of putting a new seating bowl half-way down into the confines of the neo-classical stadium made the project one of the most hotly-debated public projects of a generation or more. So much so, comparatively few back then noticed the redesign also meant the outright demolition of the Chicago Park District Administration Building, an unusual pre-War modernist structure designed by architects Holabird & Root.
Built in 1939 for the then-new park district, the long, four-story limestone building, 425 E. McFetridge Dr., abutted Soldier Field's northern edge, as the image above shows.

The vanished building is worth a revisit. The old headquarters, with its strong WPA modern design and European modernist inflections, was unusual for Chicago—if only because so little on that scale was built here in the 1930s. The building lives on, thanks to a compelling set of Historic American Building Survey images on the Library of Congress website. The photos accompanying this piece come from there.

Here's a photo of the lobby during the building's final years. You can get sense of the building's modernity with the circular recessed lights and the marble walls:

The open staircase, with its minimalist, curved railings...nice:

And look at this enclosed garden out back, with seating, located outside the building's basement dining hall:

Here's the park district board room: 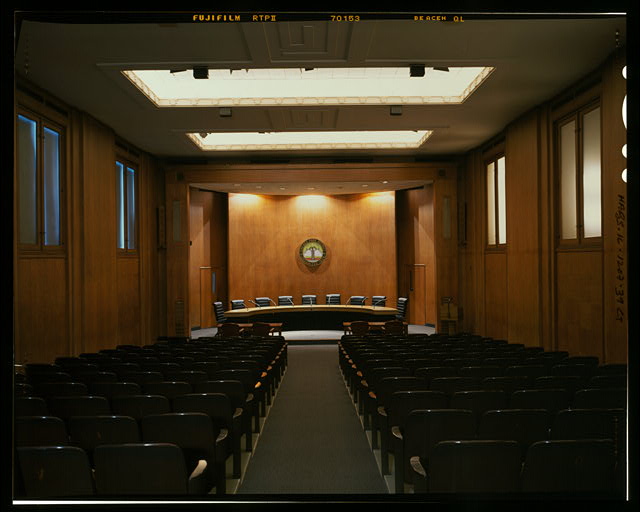 And here's a photo taken from the roof of the Field Museum showing the building and the stadium—pre-renovations—behind it:

The administration building was in sad shape in its last years. The park district estimated it would have then $20 million to fix up the old building—and that was in the mid-1990s.

It was demolished in 2001 and the agency took up residence, as renters, at 541 N. Fairbanks.