And not just among the usual suspects.

In Chicago this time of year, nowhere is this growing hunger for local food more evident than in the 10 year old Good Food Festival.

Jim Slama, president of FamilyFarmed.org, explains that it’s both a financing conference and food festival that has grown considerably since its first modest year.

“The first year was at Kendall College, which was not even open yet at the Goose Island campus,” he remembered. “Howard Tullman gave us half a floor. There were still studs on the walls. We had 50 tables for farmers, 300 people showed up. Paul Kahan gave the keynote. It was such a hit that we said ‘you know what, let’s add a consumer show and take it to Navy Pier’ (which we did the next year) and make this into the gathering place for the sustainable local food movement in Chicago.”

This year’s event featured speeches by Mayor Rahm Emanuel, CEO of Whole Foods Walter Robb and 1871 CEO Howard Tullman. That was part of the food financing fair and symposium.  It was all about making deals, growing entrepreneurs and connecting organizations like Chicago Public Schools, McCormick Place and Lettuce Entertain You with local farmers to supply their foods. 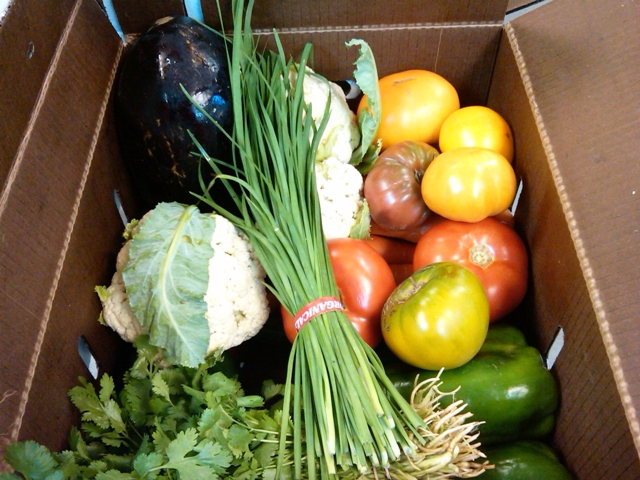 Slama says he has been incrementally building these relationships for years with his organization Family Farmed.org

“[Last] year when Eataly came to town, they called us and said ‘we want local food’,” he said. “Now when you go to Eataly you will see they have a lot of local food and these are the kinds of relationships we help to build.”

But Saturday’s events are aimed at the consumer, the foodie and local food-loving families, says Slama.

“We’ve got seven James Beard-recognized chefs doing demos,” he said.”Rick Bayless leads it off. He’s getting this Good Food Chef of the Year award. Jason Vincent, Erling Wu Bower and Paul Virant are also doing demos. It’s also a whole lot of fun with workshops and 160 vendors. Michael Ruhlman and Brian Polcyn are doing a three-hour workshop on butchering and people will learn to cure their own meats. And they are using a Greg Gunthorp hog. It’s just really a very fun day for people and families.”

Full disclosure: I am mediating a panel at one of the Saturday workshops about brewing your own fermented sodas and kombucha. Don’t know what those are?

“Kombucha is an awesome fermented beverage using a funky symbiotic colony of bacteria and yeast on top that ferments the sweetened tea into a lightly sweet beverage,” says brewing panelist and creator of fermup.com Brendan Byers. “I’ll be focusing more on the fermented soda side of things, using a wild yeast and bacteria culture that someone can catch similar to sourdough.”

Over the years, the Saturday portion of the festival has also become the premier marketplace for CSA shopping. These are shares you can buy in a farm in exchange for a weekly box of fresh produce during the growing season. Dozens of farms will be presenting their plans and signing up customers in the CSA pavillion Saturday.  Many of them will also be part of a “Band of Farmers” talent show that evening aimed at raising CSA awareness. Organizer Jody Osmund of Cedar Valley Sustainable Farms, does a performance art piece to Tim Minchin’s song Canvas Bags. But what about the others?

“We’ll have everything from poetry to last year we had political puppetry,” Osmund said. “Of course, we’ll have music. One of the bands is hairy vetch, kind of playing on the cover crop names. Last year there was roller dancing and performance dance, synchronized with pitchforks and farm implements.”

But Osmund promises that’s not all. “Returning this year is the farmer fashion show, where the farmers will present their favorite farm duds on stage.”

With this explosion of farmers markets, home butchering, farm shares and even farmer talent shows, it’s clear that urban and rural food world are coming together in ways they haven’t in a very long time.

Note: If you are reading this on Friday afternoon, you still have time to attend the Good Food Festival’s Localicious event from 7 to 9 p.m. at the UIC Forum. It features several of Chicago’s top chefs serving dishes made from local ingredients as well as offerings from craft brewers of the Midwest. Tickets and information at goodfoodfestivals.com