In the perennial battle to keep Asian carp and other riverborne invaders out of the Great Lakes, one intervention is often proposed as the only long-term solution: separate the Mississippi River and Great Lakes watersheds.

Or, put another way: restore the divide that existed until engineers reversed the flow of the Chicago River during the 19th century, a feat that earned Chicago its can-do reputation and paved the way for the city’s explosive growth.

Gov. Pat Quinn took the appreciable and unexpected step of endorsing, to some extent, the "ultimate solution" of basin separation during a conference of the Council of Great Lakes Governors last week. It’s a controversial position, as creating a system of physical barriers in the Chicago Area Waterway System would cost billions of dollars. 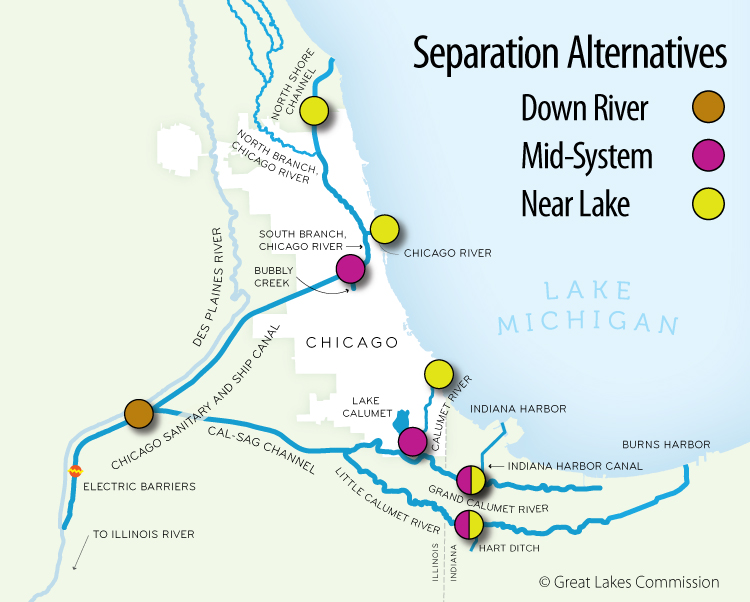 Critics say physical separation would cost communities along the industrial corridor that surrounds the Chicago Sanitary and Ship Canal. Blocking shipping lanes, for example, would disrupt barge traffic. Although it is a fraction of what it once was, shipping on the canal would need to change significantly, perhaps transferring cargo to freight trains.

And some worry even a physical barrier would do little to interrupt the most important vector of invasive species: human transport. A recent survey of Great Lakes invaders since 1936 found only two species, the alewife and sea lamprey, made their way into the Great Lakes by swimming. The vast majority were “unintentionally transported or released.”

But others argue separation will generate significant benefits beyond stopping the spread of Asian carp. Waste from Chicago winds its way down the Mississippi, ending up in the Gulf of Mexico. Barrier locations could also house water treatment equipment, and returning some of that flow to Lake Michigan might even slightly ease flooding downstream.

Reverse Effect, a project by Chicago architects Studio Gang, the Natural Resources Defense Council and Harvard University’s Graduate School of Design, investigated how a barrier in the Chicago River’s south branch could “connect and recharge surrounding neighborhoods” both culturally and economically.

Quinn and several governors met in Mackinac Island, Mich. to discuss a range of Great Lakes economic and environmental issues — the first time so many Great Lakes governors convened around the topic in eight years. Indiana Gov. Mike Pence maintained his state’s opposition to separating the basins, citing economic concerns.

With Asian carp on Lake Michigan's doorstep already, many ecologists say now is the time to act. Next year the Army Corps of Engineers will make a recommendation on Asian carp, and separating the Great Lakes from the Mississippi will be among the options. Quinn’s unexpected remarks Saturday encouraged those in favor of separation, but belied a divided group of Great Lakes governors.