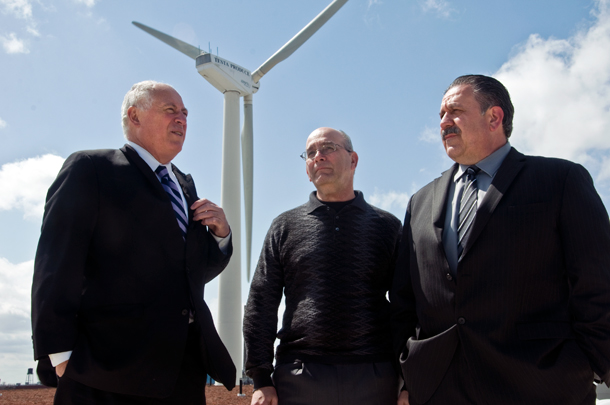 Against the backdrop of some 154 solar panels and Chicago’s first freestanding (and only utility-scale) wind turbine, Gov. Pat Quinn drank in the green roof atop Testa Produce, a south side wholesaler of fruits and vegetables that is the first LEED Platinum facility of its kind in the nation.

The $24 million refrigerated food distribution center was the site of Quinn’s debriefing of sorts from a trade trip he just took to Mexico — the first time an Illinois governor had made such a visit in 13 years. Water technology, he said, would be a key industry for both nations as they grapple with economic and environmental challenges.

With 1.6 million Mexican-Americans in the state, Quinn said, Illinois has a special relationship with its second largest trade partner (Canada is first). And in parched Mexico City, water technology is a growth industry. Dwindling resources have driven Mexico City to drill more than one mile into the Earth for clean water, an unprecedented depth typically considered too expensive to tap in the U.S. The country recently committed $2.8 billion to a Water Sustainability Program, promoting conservation as a way to slow the disappearance of aquifers that in some cases have already dropped hundreds of feet.

The governor met with Mexico City Mayor Miguel Mancera, two Mexican governors and representatives of the Mexican National Water Commission (CONAGUA). He brought reps from a Wood Dale, Ill.-based company. In-Pipe Technology is one of 100 wastewater companies that Quinn said stand to benefit from a growing demand for water technology south of the border. In-Pipe recently signed a contract with Mexico City for a pilot waste treatment program there.

In Mexico Quinn also found Lake Michigan a new sister in Michoacán state’s Lake Pátzcuaro, a small lake about 200 miles from the capital that is populated by indigenous groups and egrets, and does not drain to the sea.