Update, August 4, 2014, 11:30a.m.: Officials are scrambling to address a growing algae bloom in Lake Erie that threatens the water supply of hundreds of thousands of people in parts of Michigan and Ohio. After tests at a water treatment plant showed dangerous levels of contamination, Toledo, Ohio officials warned residents not to use city water early Saturday. The water ban was lifted Monday, but the algae bloom isn't expected to peak until September, potentially continuing to pollute the lake that supplies drinking water for 11 million people.

It’s spring, and the heavy snowmelt and rain is good news for farmers and scientists who have been worried about drought the last few years. But all that water has other consequences for the Great Lakes, including runoff: rainstorms carry fertilizer from farms and lawns into streams and rivers.

Much of it eventually ends up in the lakes, and when too much accumulates it can feed huge blooms of toxic algae. The problem is especially dire in Lake Erie around Toledo, Ohio, where algal blooms in 2011 and 2013 were some of the worst on record.

“I’ve seen the lake go from where you weren’t even supposed to go swimming in it to what it’s like today, and the change has been phenomenal,” says Tim Robinette, a Toledo-area resident and longtime fisherman. “There were places that used to literally dump their waste in the river, and it used to float on down the river back in the ‘50s and ‘60s. And that don’t happen anymore.”

Lake Erie became infamous for its contamination after the Cuyahoga River caught on fire in 1969; the lake’s notoriety is credited with inspiring the passage of the federal Clean Water Act as well as the creation of Earth Day. And Lake Erie’s comeback has been equally legendary: point source pollution from factories and sewage systems was cleaned up to a great extent by the 1990s.

In the 2000s, though, algal blooms began to reappear in the lake, bringing with them dead zones, bad smells and water that was once again risky to consume even in small amounts. In 2011, following a spring of particularly extreme rains, the algae blooms in Lake Erie grew to more than 5,000 square kilometers—three times the previous record. That got the attention of the International Joint Commission, the U.S. and Canadian body that has monitored the lakes for more than a century. They worked on a major report released this spring urging states and provinces to take immediate action to curb runoff.

“Well, it looks kind of like green goo, you know, like thick, like pea soup-type green,” says Carol Stepien, a biologist at the University of Toledo’s Lake Erie Center, which overlooks the Maumee Bay.

The gooey muck she’s talking about is blue-green algae or cyanobacteria, which, when it’s overfed by fertilizers in the water, can grow into blooms that are dangerous to drink or even touch. In recent years cyanobacteria has poisoned multiple pets who drank from the lake, and last summer it shut down a water treatment system in a township near Toledo.

When the algae decomposes there’s another problem: it eats up oxygen, and that creates dead zones in the lake where no fish or plants can live, an effect called hypoxia. 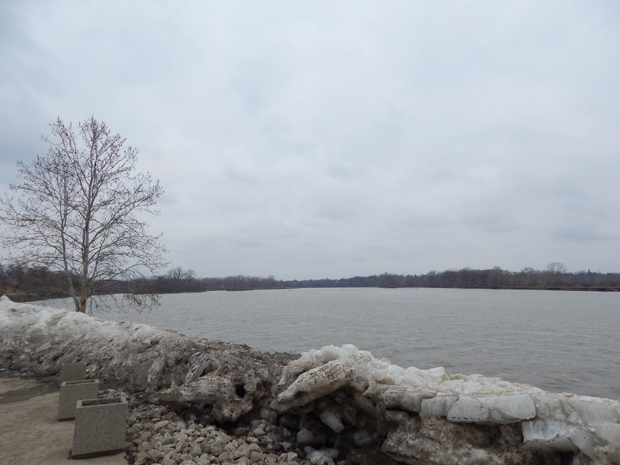 Stepien explains that the Maumee River, a large river that runs through the middle of Toledo and into the bay, carries fertilizer runoff from up to 150 miles away. The Maumee Bay is a particularly warm, shallow part of the lake, and as runoff gathers, the algae becomes a well-fed monster.

But this isn’t some mysterious green goblin. Stepien says the problem can be traced primarily to phosphorus, an ingredient in commercial fertilizers that’s also found in manure, and sewer overflows from municipal water systems. The trouble is identifying and stemming the sources of the phosphorus.

“This is water that’s coming in from many many places, it can’t be pinpointed to a single pipe or certain pipes,” she says.

Sources can’t be pinpointed individually, but the potential sources are widely known. Among them are lawns and golf courses that use commercial fertilizers. Just a couple miles away from the lake, there’s a golf course right along the river.

“Golf courses get a bad rap for the leaching issue,” says Tim Glorioso, the golf course manager at the Toledo Country Club. He admits people who come here don’t want their greens to be brown, and a 2009 survey of golf course managers found the average golf course puts down 65 pounds of phosphorus per acre each year, and even more pounds of nitrogen.

Glorioso, though, says he uses a lot less. 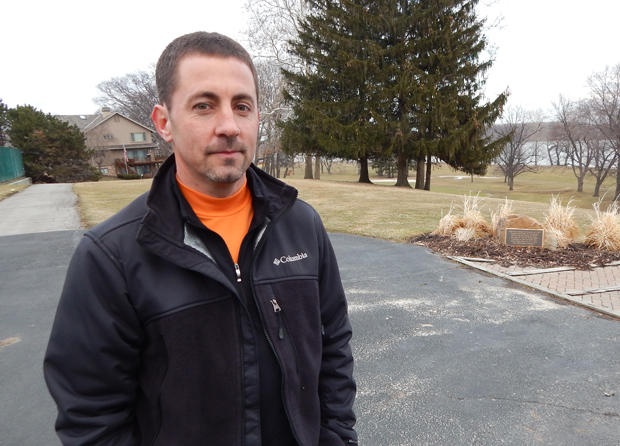 “With the way budgets are right now, why would you go out and put more phosphorus down and more nitrogen than you need to? It doesn’t make sense, economically,” he says.

Glorioso monitors the phosphorus in the soil constantly, and says he only puts on the amount the grass can absorb. Timing matters too — simple stuff like not putting down nutrients on frozen ground, or right before a storm. He attends continuing education classes during the winter months and thinks responsible management practices can lessen golf courses’ contribution to the algae problem. But he admits that not everyone is quite so diligent.

“We have some people that probably don’t do what they’re supposed to do,” he says.

Most of the area that drains into the Maumee River isn’t golf courses or suburban lawns: it’s farms. There are miles and miles of them — mainly corn, wheat and soybeans — from Toledo all the way up the Maumee River and its tributaries, which extend into Indiana and Michigan.

“We could argue back and forth about is it urban, is it yards, is it agriculture, is it municipal water systems,” says Tadd Nicholson with the Ohio Corn and Wheat Growers Association. “I prefer to say it’s all of those things.”

Corn has been booming recently due to ethanol production, so farmers are planting to the very edges of fields, and at least some of them are laying the fertilizer down thick. But Nicholson says the corn industry is producing more corn per acre while also using less fertilizer than it did a few decades ago. In other words, corn can’t be solely to blame for the resurgence of algal blooms. And, like Glorioso, he says education and voluntary programs to reduce runoff are as beneficial for the industry as they are for the lake.

“If we can show farmers how to minimize phosphorus runoff, it’s not a hard sell, it’s something that we are very motivated to do,” he says.

It’s worth noting that over-applying fertilizer isn’t against any laws in Ohio, and agriculture in particular has long been exempted from aspects of the Clean Water Act; the industry has also pushed back against water quality regulations for runoff. There’s a bill pending in the Ohio legislature that would require agricultural users of fertilizer to apply for a permit. It has the support of the Ohio Farm Bureau, but not the Ohio Corn and Wheat Growers Association. And even that law is not really a set of rules but a required educational program. In Illinois, a 2010 law restricting the use of phosphorus in fertilizer exempts farms and golf courses. 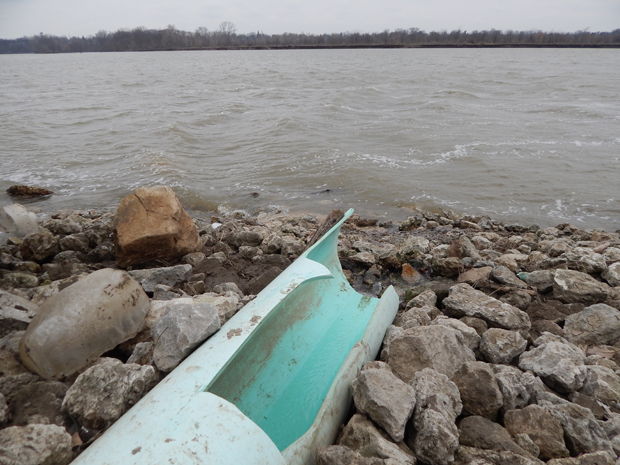 ‘When you look at Lake Erie, it breaks your heart’

Cities like Chicago and Toledo are under federal order to reduce sewer runoff  through extensive infrastructure upgrades, and manure runoff, which is also a contributor, is more tightly regulated than farms. The IJC report finds the need for more research and monitoring to establish clear best practices for reducing runoff from all sources, and the agriculture industry in particular has posited the need for more research as a reason to hold off stringent regulation.

“We would never allow a dump truck full of manure to back up and dump into the lakes,” says Lana Pollack, the U.S. chair for the IJC. She refutes the idea that there’s not enough research to take action on the issue. “The science is there, we understand the cause, we understand the effect, and we understand that no one should have a choice whether or not to harm Lake Erie or any of the other lakes.”

Lake Erie is far from the only body of water that’s been affected: smaller lakes throughout the region have seen algae blooms in recent years. Last year, the bay of Green Bay Wisconsin was literally green. And there may not be an algae bloom off Chicago’s Navy Pier yet, but that’s because most of Illinois’ runoff drains to the Gulf of Mexico. In the past, that’s helped create a dead zone there larger than the state of New Jersey. Smaller lakes and ponds throughout the midwest are susceptible to algal blooms during the summer months.

The IJC report recommends that Ontario, Canada and the states in the Lake Erie basin set new targets for reducing phosphorus runoff in Lake Erie. That could lead to more regulation on farms as well as septic system owners and urban water treatment systems.

“One community shouldn’t be able to decimate the resources that are so important to everyone,” Pollack says. “If you look at Lake Erie, it breaks your heart.”

She also says there’s no silver bullet, no single solution or single cause. There was a record amount of snow and ice this year around Toledo, and it’s all been melting, running off and bringing phosphorus with it.

Back down on the Maumee river bank, cold, clear water rushes out of a broken drainage pipe and into the river. In a couple hours, it’ll be in Lake Erie.

Lewis Wallace is a reporter for WYSO, the public radio station for Dayton, Springfield and Yellow Springs, Ohio.

Front and Center is funded by the Joyce Foundation: Improving the quality of life in the Great Lakes region and across the country.