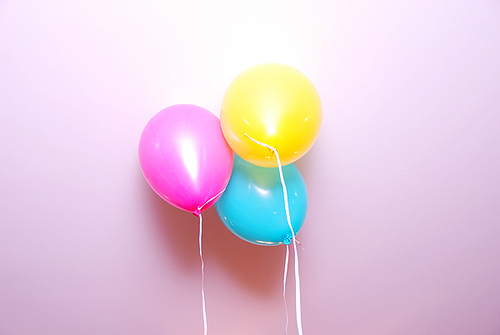 More kids may be born during the spring than any other time of year. It’s also possible more kids are born during the fall. We really don’t know, but we do know it’s important to have a “news peg.” And many kids (maybe even in the hundreds) do celebrate their birthdays around this time. If you have one of those lucky kids and are looking for a new way to celebrate his/her birthday, here are some ideas!

The Make Someone Else’s Sundae Party

Kids today get everything they want. Treats are handed out daily. The result: The thrill of the Make Your Own Sundae Party is gone. Teach your kids that life doesn’t always work out the way they want it to while still getting credit for giving them ice cream with a Make Someone Else’s Sundae Party. Each kid gets to make the sundae of his/her dreams — and then has to give it to another child at the party who doesn’t like half of its ingredients.

The Inflate One of Those Inflatable Things Party

Kids love to jump around on those big inflatable things. But do they have any idea of what it takes to fill them with air? Do they even know there’s air inside of them? Inspire your birthday boy’s/girl’s curiosity — and get a cheaper rate — by holding a party during the setup period for another child’s birthday party. Each kid at the party will get a chance to help inflate an inflatable — old-school-style, by breathing into it. If your child has enough strength in his/her lungs left, he/she can blow out the candles on a cake after!

Let’s be honest: Most little kids put up with birthday parties so at the end they can get the goodie bag full of cheap candy and toys (both usually made from the same ingredients). The Goodie Bag Party saves you the hassle of organizing activities and saves kids the agony of being made to do them. Here, parents drive their kids to the home of the birthday boy/girl, ring the doorbell, receive a goodie bag, say a quick “Happy Birthday” and then head back home.

The Photo Studio Party saves money and provides you with high-quality photographic memories. But a word of warning: This idea only works with little kids who won’t remember their party years later. Simply take your toddler to an inexpensive photo studio and request photos of your birthday boy or girl against backgrounds of kids having fun at a party. Years later, make up names for those background kids and take credit for throwing an amazing birthday bash.

The Entrust Your Child With a Man With Minimal Soccer Coaching Experience, No Experience With Large Groups of Children and a 45-Minute Rental of an Indoor Athletic Space Party

Dance parties for kids have become quite popular in this age of easy-to-make mixes. Some parents play songs they like, others play “kids music.” Both ultimately leave the kids unfulfilled. The inexplicable truth is that today’s kids ages 4 to 8 only want to listen to one song: “Dynamite” by Taio Cruz. So, clear out the furniture in the living room, put Taio’s classic on a loop, leave the room and let your birthday boy/girl and friends “put their hands up in the air sometimes and say ‘Ayo’” for the next three and half hours.

The Put Together a Porcupine Workshop Party

The Build a Bear Workshop is a fine idea — until you actually take your birthday boy/girl and his/her friends to the place and the whining commences. “But I already have a bear!” “I don’t like bears!” “Mommy, why did the bear have to become the de facto stuffed animal!?” The kids have a point. So why don’t be different and turn those whines into smiles and the occasional tears with a Put Together a Porcupine Workshop Party — featuring real quills!

Too often kids’ birthday parties are focused on kid-oriented activities at the expense of preparing your little ones for the real world. So, why not try an Adult-Style Party? Invite an assortment of your birthday boy’s/girl’s friends, school acquaintances and complete strangers, but make sure your child spends the bulk of the party cornered by a stranger. Lead the group in activities like “So, What Do You Do?,” “Yes, Mad Men Is a Great Television Show,” and “I’m Going to Get Another Drink.”

(The Interview Show is back at The Hideout Friday, June 1, from 6:30 p.m. to 8 p.m. Guests include Ada St. and MK chef/owner Michael Kornick, The Fish That Ate the Whale author Rich Cohen, The Hood Internet DJ/producer STV SLV and musician, teacher and Coach House Sounds founder Matt Baron.)