Editor's note: There's plenty going on in this post: We're answering a question (partly through an animated GIF!), but we're also letting you know we're not done! A previous version of this post asked you to pick which city's story of resistance to Chicago annexation we should tell next: Blue Island, Oak Park or Evanston. Almost 2,700 of you made your voices heard! The results? Let's just say we're looking forward to revisiting our short interview with Blue Island Mayor Domingo Vargas, who told our producers that he considers the suburb to be "the center of the universe." You can hear Vargas and other suburban officials make their case in our "Smackdowns" podcast episode.

At its start, Chicago was a marshy outpost of hearty settlers who used the convergence of Lake Michigan and the Chicago River to their benefit.

Now the city spans approximately 237 square miles. Many of its nearly 2.7 million residents live far enough from both the lake and river that the economic drivers and geographic anchors are out of sight, out of mind.

Curious Citizen Jim Padden grew up in Beverly — one of the far flung neighborhoods in the southwestern corner of Chicago. He always wondered why his community was part of the city when others closer to the Loop (such as west suburban Oak Park) maintained their independence.

So he asked this question about Chicago’s borders:

What were the original city limits? How did it grow over time as it annexed the neighborhoods we know today?

Chicago swallowed up neighboring towns and villages at a breakneck pace early in its history. Some, like Hyde Park Township, kept remnants of their old names as neighborhood names. Others, like Oak Park, fought tooth and nail to maintain their autonomy.

The squiggly city borders we know today are the result of hundreds of elections, in which residents faced the same choice: Do you want to be a Chicagoan?

From marsh to metropolis

When Chicago was incorporated as a town in 1835, there wasn't much municipal government in the area; in fact, there wasn’t much government at all. 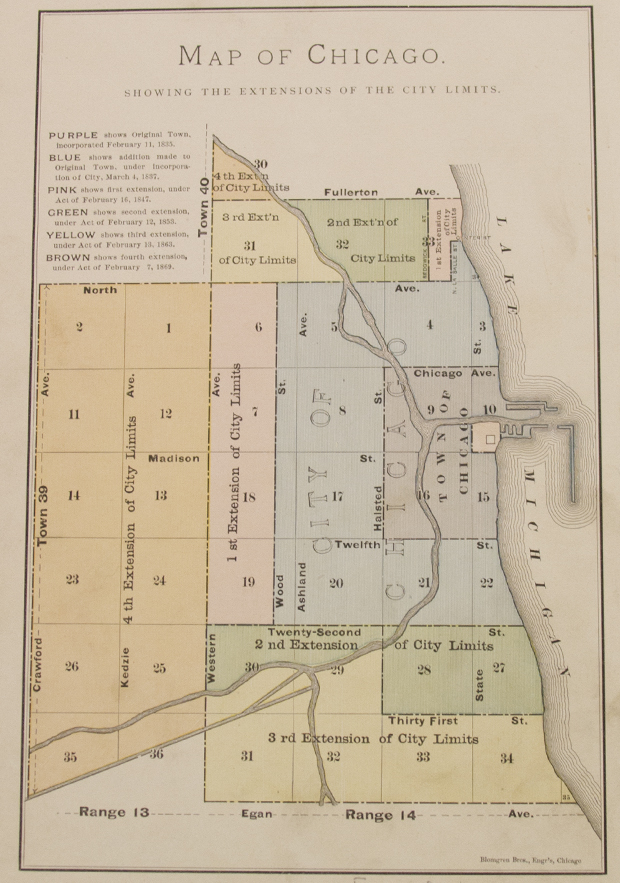 But Chicago’s borders soon expanded for the same reason they do elsewhere: money and politics. After all, if you wanted to know who you could collect tax dollars from, you had to know who lived in the city and who didn't. Maps at the Chicago History Museum show that in 1837, city borders were:

In the Great Fire of 1871, much of the city was destroyed. The most significant annexation in Chicago history came almost two decades later, in 1889.

That's when Hyde Park, Lake View and Jefferson and Lake townships became part of Chicago. The annexations were the result of an election and added 125 miles and 225,000 people to the city, making it the nation’s largest city by square mileage at the time.

(The land in Hyde Park would become home to the city’s marquee event, the World's Fair: Columbian Exposition, just a few years later in 1893.)

Other annexations didn't change the population of Chicago as dramatically, but many were contentious for the residents involved. The city’s longstanding reputation as a haven for sin fueled efforts by some townships to stay autonomous (and dry).

But others agreed to join, being wooed by the city’s municipal services. The city’s public schools system was a draw. Its superior water, sewer, electric, and roadway services were attractive too.

Explore: Archival news coverage of the 1899 annexation of the Austin neighborhood on Chicago’s West Side

“Those four townships that voted wholesale to come in in 1889, they were looking at Chicago and the municipality as really a way out of a lot of problems,” said Chicago History Museum historian Peter Alter. “No longer were things like sewers and power seen as luxuries that you could offer to the rich; they were seen as necessities.”

The paradigm began to shift away from annexation as the city could no longer afford to swell and the last major annexation — the land for O'Hare International Airport — was more of a grab for land than individual taxpayers in 1956.

“One of the reasons annexation stops [...] in the early 1900s is because the city really doesn’t want to annex any more territory,” said Chicago historian Ann Keating, who wrote Chicago Neighborhoods and Suburbs: A Historical Guide and co-edited The Encyclopedia of Chicago. “Our vision is suburban communities wouldn’t want to join in to the city, but the fact of the matter is the city kind of hits a point where they can no longer extend services.”

Meanwhile, some suburban communities remained adamant about their independence.

Tricia Bobeda is a producer on WBEZ's digital team and co-host of the Nerdette Podcast. Follow her on Twitter. Alyssa Edes was a WBEZ web intern this fall.