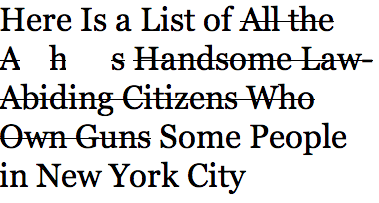 GUNNING FOR TROUBLE? Just when you thought things might be dying down after a New York State newspaper published a mappable database of all local gun-permit holders in two counties, Gawker's John Cook -- a veteran of the TV beat for the Chicago Tribune -- is stirring up fresh controversy. Under the headline "Here Is a List of All the A**h***s Handsome Law-Abiding Citizens Who Own Guns Some People in New York City" (the strikethroughs appeared on the site later; asterisks are mine), Cook notes that the names of 1.2 million New Yorkers licensed to own handguns -- and the addresses of 300,000 -- have been available online for years. And he's published a searchable list, triggering hundreds of fresh comments. Many of them ran along these lines: "When some kid gets killed in NYC next week with a gun stolen from one of these legal owners are you okay with that John?" Also: death threats.

ON THE PLUS SIDE? NO SNOW. Chicago-area hospitals say they're overwhelmed by the worst flu season in nearly a decade.

RICH BLOCKS, POOR BLOCKS. An interactive map lets you type in an address from any neighborhood in America to find out how much money people there make.

iPHONES, CHEAP? The Wall Street Journal says Apple's working on a lower-priced version with a cheaper body, maybe to launch later this year.

WELL, IT'S NO SPORK, BUT ... Hot at the Consumer Electronics Show: The HAPIfork, an electronic fork that tracks how long you eat, how many bites you take and the time between those bites. It vibrates if you eat too fast. And it reports all that to your iPhone.

Soundtrack that helped prepare this issue: This playlist.