Illinois has hit a milestone it was not trying for.

Numbers released by the Illinois State Board of Education in its annual school report card show that—for the first time ever—low-income children now outnumber middle-class students in the state’s public schools. It’s a trend that could affect everything from the state’s economic competitiveness to college-going rates to concerns over upward economic mobility in a time of increasing income inequality.

Around 1.05 million kids qualified for free or reduced-price lunch during the 2013-14 school year.

“Does that create challenges? Absolutely,” says Illinois state school superintendent Christopher Koch. “Students are coming with more needs to schools and this is at a time when of course we’ve been having all the financial stresses in funding education…. There’s a lot of lines in our budget that serve needy students that have taken significant reductions and we have not been able to get those back to 2009 levels.”

The percentage of Illinois students who qualify for a free or reduced-price lunch—long used by schools as a rough proxy for family income—has climbed steadily since 2000. In that year, 36.7 percent of Illinois public school students were considered low-income. Today, 51.5 percent are. 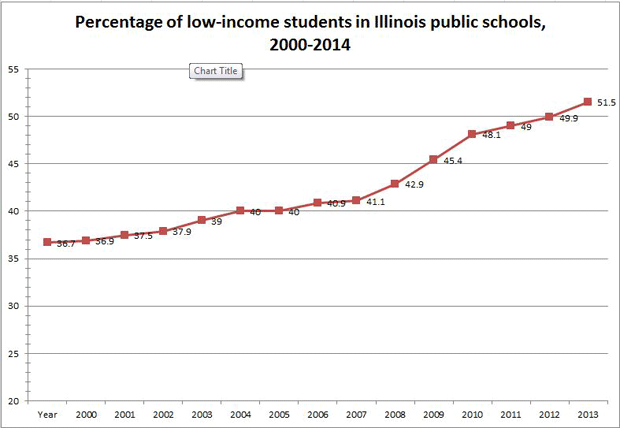 In the 1999-2000 school year, 36.7 percent of Illinois public schoolchildren qualified for free or reduced-price lunch. Today, 51.5 percent qualify. All the increase has occurred in suburban and downstate school districts.

According to federal guidelines, which are adjusted for cost-of-living increases each year, a family of four earning less than about $31,000 annually would qualify for a free lunch at school; kids whose parents earn less than $44,000 would get a reduced-price lunch.

“This has tremendous implications,” said Michael Rebell, the executive director of the Campaign for Educational Equity at Columbia University and the attorney who successfully sued the state of New York for more school funding for city kids. “We don’t have an education crisis in the United States, we have a poverty crisis.”

Rebell says poor students need services—from before- and after-school opportunities to summer programs to health care and preschool—and all of it costs more. He says “irrational funding systems” for education in the U.S. mean affluent kids attend schools that spend more per pupil than schools serving poor kids.

In Illinois, nearly all the increase in low-income students since 2000 has taken place outside Chicago. The percentage of students in Chicago Public Schools who are considered low-income has remained relatively stable since 2000, at about 86 percent. Two-thirds of the state’s low-income kids now live outside the city.

In Community Consolidated School District 62 in Des Plaines, 57 percent of children in that 11-school district are now low-income— a 250 percent increase since 2000.

“Every year we have been adding Title I schools. Even our schools that have typically been the more affluent schools in our neighborhoods are now also seeing that they qualify for Title I (federal poverty) funding,” says District 62 superintendent Jane Westerhold.

Des Plaines schools have also become more Latino, another statewide trend. For the first time this year, white students dipped under 50 percent of the public school population as a whole.

Westerhold says she believes that much more than students’ racial or ethnic backgrounds, it is poverty that is challenging schools.

“It’s not about our subgroups of students that are Hispanic students or Asian students or black students. It’s really not about that. It’s about poverty--that is where the achievement gap is.” 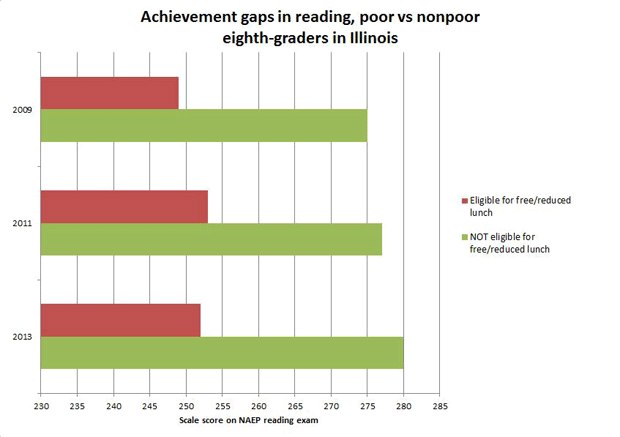 Advocates for low-income students believe states like Illinois must examine how well schools are doing with low-income kids. Daria Hall, the K-12 policy director at The Education Trust in Washington, D.C., says Illinois is behind the national average both in terms of how low-income students perform, and the rate at which they are improving.

“Illinois is going to have to take a very serious look at what kind of supports and opportunities it’s giving to low-income students. These students are no longer the minority. They are our public school population,” says Hall. And she takes issue with another gap as well: “When you look at the dollars that are spent per pupil in high-poverty versus low-poverty districts within Illinois, the gap is glaring. If Illinois is in fact committed to providing low-income kids with an equitable educational opportunity, they need to address that gap.”

Challenging the numbers, looking beyond schools

Michael Petrilli, president of the Thomas B. Fordham Institute, a conservative education policy think tank, says it’s possible that free and reduced-price lunch counts may be inflated (http://educationnext.org/fraud-in-the-lunchroom/). The lunch counts have risen faster than child poverty rates, and Petrilli notes they include both students living in poverty and children just above it.

“Some of (this) almost certainly reflects what’s been happening under the recession. It also reflects that a growing number of our students are coming from immigrant families that tend to be much poorer than the families that were going to the public schools 10 or 20 or 30 years ago,” says Petrilli.

He says the country needs a better strategy for getting kids into the middle class. “Right now I worry that too many of our reform efforts and our policies are focused on college as the only pathway to the middle class. We’re not having much success getting low-income kids all the way through college.”

Studies have shown that half of all higher income Americans have a college degree by age 25, while just 10 percent of low-income individuals do.

“We have got to make sure that we have strategies for all the other kids as well,” says Petrilli. He says that includes vocational programs that put high school graduates in the workforce right away and allow them to “climb the ladder that way. That absolutely is still a good way to the middle class,” says Petrilli.

Richard Rothstein, a research associate at the Economic Policy Institute and author of the book Class and Schools: Using Social, Economic, and Educational Reform to Close the Black–White Achievement Gap, says poverty wreaks its damage long before students ever show up at school. “The best way to raise achievement with Illinois children would be to ensure that their parents had more secure employment, the unemployment rate was lower, they had a higher minimum wage, they  could afford to live in stable housing--where children can flourish (and) where they had access to good health care. Those are the policy responses that are called for by these kinds of data. There is very little schools can do once children come to school unprepared to take advantage of what schools can offer.”

Last year, Steve Suitts, the vice president of the Southern Education Foundation, authored a report showing the majority of all students in the South and West of the United States are now considered low-income. He says growing inequality in the nation isn’t produced in the short-term by schools, “but if our education systems don’t perform better in educating low-income students, it will in fact sustain, perpetuate, and grow the inequality.”

Suitts says he worries about a society of the haves and the have-nots.

“I'm not sure that we can ask educators to tackle the problems of poverty in America on their own. There's got to be a broader community of people focused on this central question. If we continue to grow low-income students and we don't grow their achievement, then that is simply going to affect everybody's well-being in the future.”

Linda Lutton is a WBEZ education reporter. Follow her @WBEZeducation.