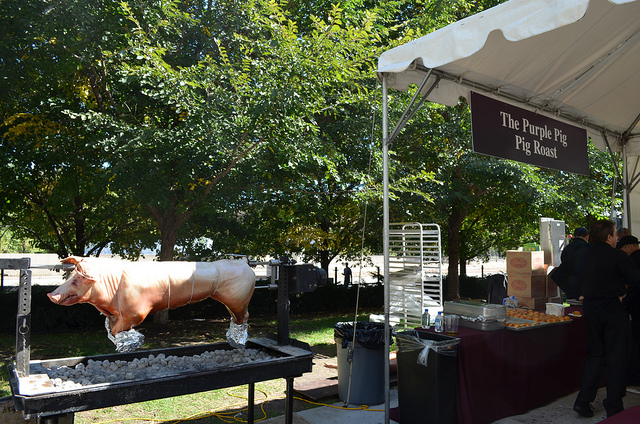 After five years, I think I've finally figured out Chicago Gourmet, the sometimes maddening annual festival held this past weekend in Millenium Park. Better yet, I think it's figured itself out too, and it goes beyond food and drink.

This year, the event sold out, drawing over 11,000 attendees to Millenium Park. Yes, the food lines were long, as they always are, but they moved steadily. And yes, drinks still outnumber food, but that means there's almost never a wait, plus they keep the food lines convivial and patient. Ultimately the notoriously long food lines are worth the wait, this year more than ever, rewarding every minute queued mostly proportionally with bites from some of the best chefs in the city. 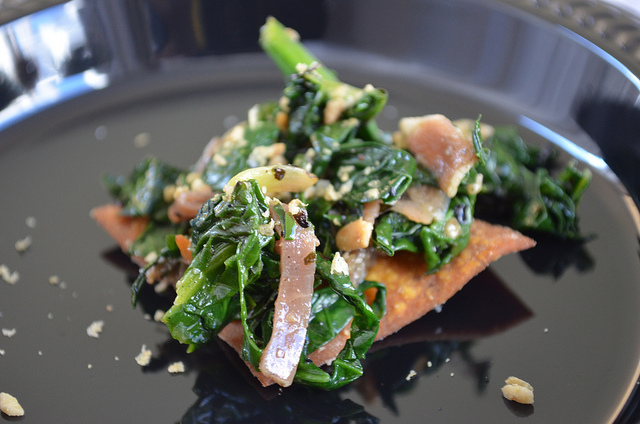 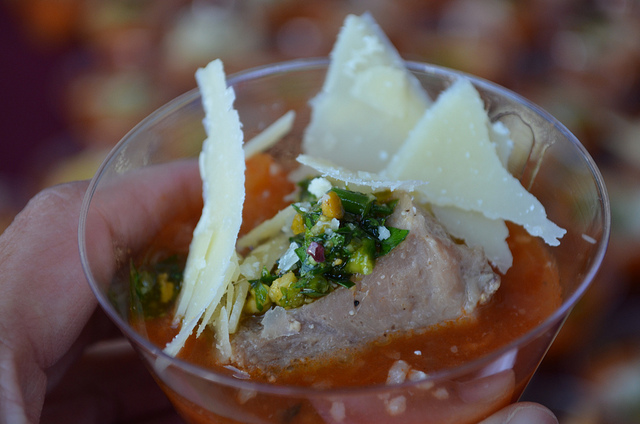 It's great to see a chef like Yoshi get the recognition he deserves, and a chef like Jared Wentworth who's known for Longman & Eagle's farm-to-table/nose-to-tail cooking show off his modernist seafaring chops with tuna crudo on glistening compressed watermelon. 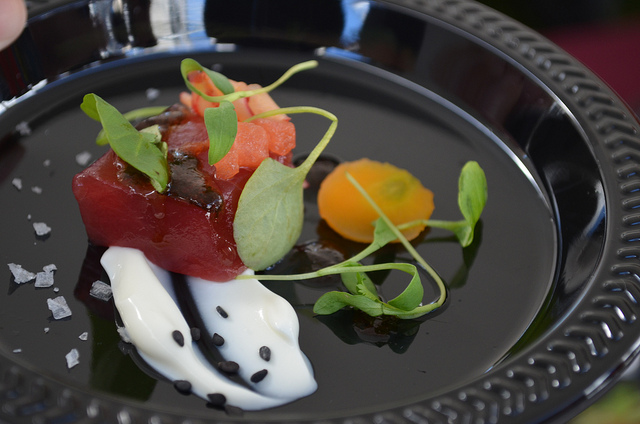 And in this day and age of cupcakes, it was terrific to see a complex all-American red velvet cake by Judy Contino, chef/owner of Bittersweet Pastry Shop, shockingly celebrating its own 10th birthday this year. 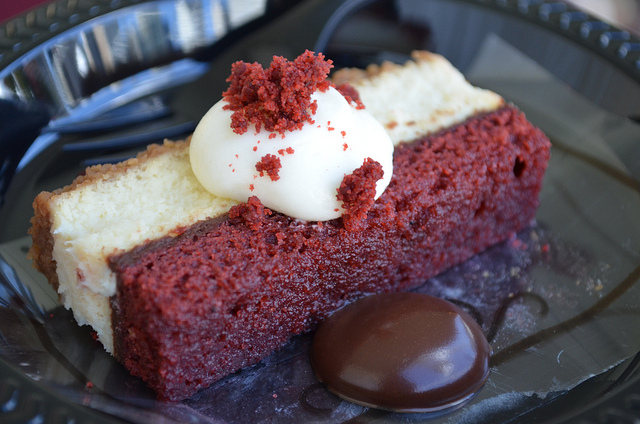 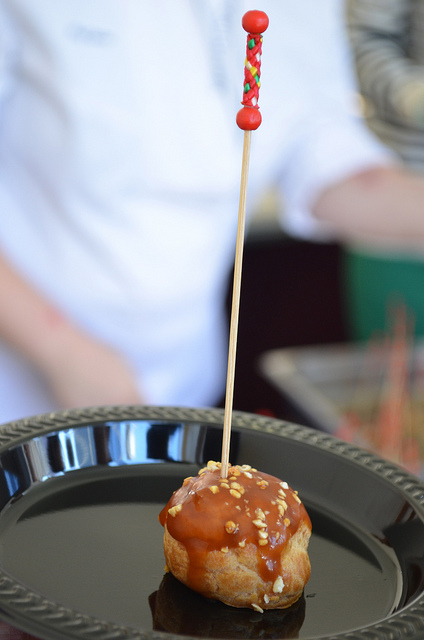 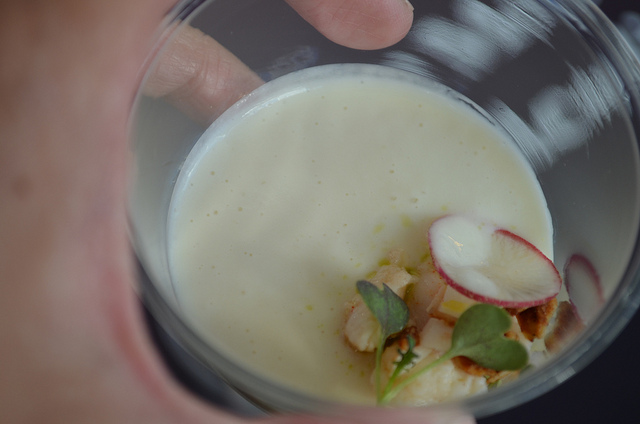 While Ryan Poli, chef at Tavernita, offered a chilled cream of corn soup with shrimp, corn, and a drizzle of vanilla seed oil. 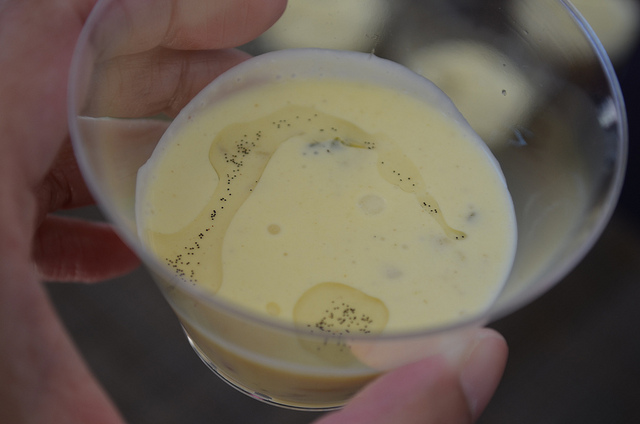 The only food tent without a line was the gluten-free pavilion, but Rosemarie O'Carroll, chef/owner of Rose's Wheat Free Bakery, ran out of her only savory dish — chicken in puff pastry, and remember gluten-free — before I got there. 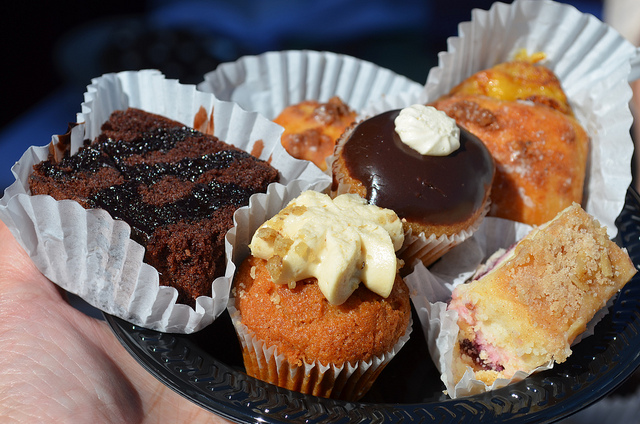 But it wasn't the food, drink, cooking demos, or cookbook signings that made the biggest difference to me this year. It was one of the seminars. While most focused on culinary discussions, one addressed the controversial subject of Asian fusion and so-called authenticity. Bon Appétit restaurant and drinks editor Andrew Knowlton moderated a panel with Embeya chef/owner Thai Dang, Ruxbin chef/owner Edward Kim, Yusho chef/owner Matthias Merges, and Saigon Sisters owner Mary Nguyen Aregoni. Quite frankly the topic was too big for the little time alloted but I think it's a glimpse of what this event can offer, beyond simply cooking, eating, and drinking, but discussions about their importance and context within our culture. Now that would truly bring something exciting to table. 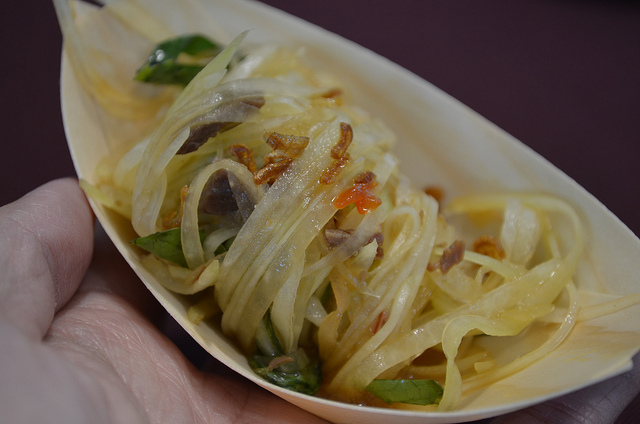