Battery-powered cars and trucks seem to be winning the day as the way forward to increase fuel efficiency and to cut carbon pollution.

But there was a time when we heard a lot about fuel cells. The cells convert hydrogen into electricity that can then power a car or truck.

That hype died down as people realized there are significant barriers to powering our vehicles with hydrogen.

Listen to the Story

One year ago, Tesla Motors CEO Elon Musk spoke at a news conference on the subject.

“I don’t want to turn this into a debate on hydrogen fuel cells because I just think that they’re extremely silly,” he said. “It’s just very difficult to make hydrogen and store it and use it in a car.”

And he hasn't been the only one to say using fuel cells to power vehicles isn't the best idea. In 2009, then U.S. Secretary of Energy Steven Chu said it would take "four miracles" to make fuel cells in cars work.

His statement was captured by MIT Technology Review:

"Right now, the way we get hydrogen primarily is from reforming gas. That's not an ideal source of hydrogen...The other problem is, if it's for transportation, we don't have a good storage mechanism yet. What else? The fuel cells aren't there yet, and the distribution infrastructure isn't there yet. In order to get significant deployment, you need four significant technological breakthroughs. If you need four miracles, that's unlikely. Saints only need three miracles."

But hydrogen is not dead.

I decided to check in with a few automakers at the North American International Auto Show in Detroit. I asked several of them where their fuel cell programs are today.

It seems like a lot of car companies still have their toes in the fuel cell game, but some are pushing ahead faster than others — especially the Japanese automakers like Honda and Toyota, and Korean automaker Hyundai. 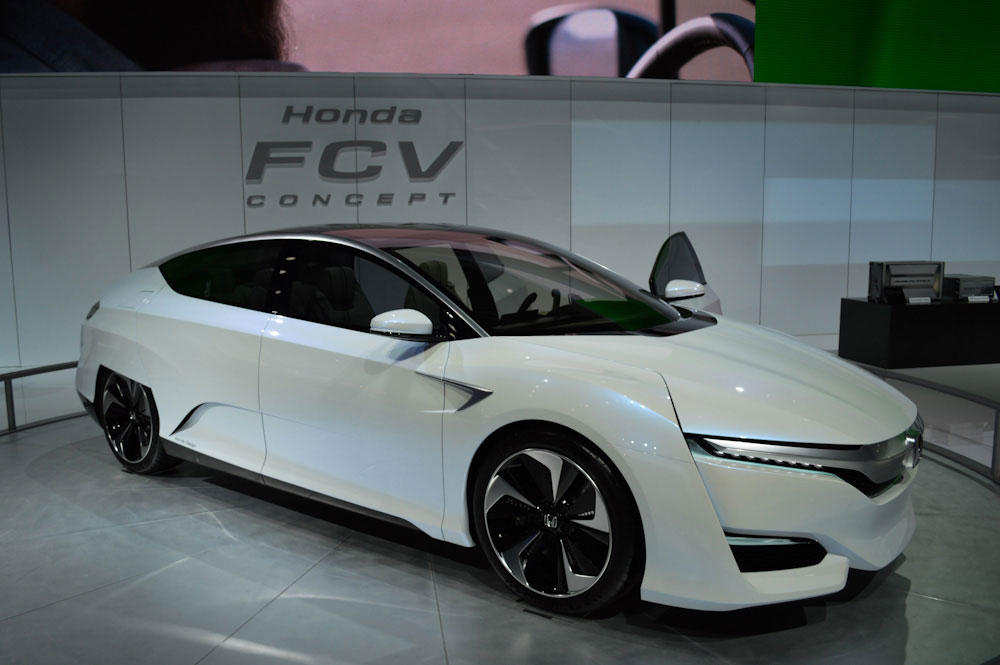 One of the concepts I've seen displayed at past auto shows is the Honda FCV Clarity.

Honda executives say they're planning a limited release of the Clarity in California later this year. They say the car will roll out in Japan sooner.

I asked John Mendel, executive vice president of American Honda, why the company is investing in fuel cell technology when people like Elon Musk are calling it silly to do so.

“Well, for the same reason that Elon talks about fuel cells being silly — we don’t think they’re silly," he says. "We think, you know, hydrogen is still the most abundant element in the universe. And that technology is rapidly changing.”

Mendel says his company, Honda, and Musk’s company, Tesla Motors, are on the same page in that they both believe in “electrification.”

“It’s just, where do you get your electricity?” he says.

Mendel says Honda is working on all these technologies simultaneously: Batteries in hybrids, plug-in hybrids, and, yes, fuel cells.

What about American car companies?

Of the big three, GM has been the biggest player in the hydrogen fuel cell field. 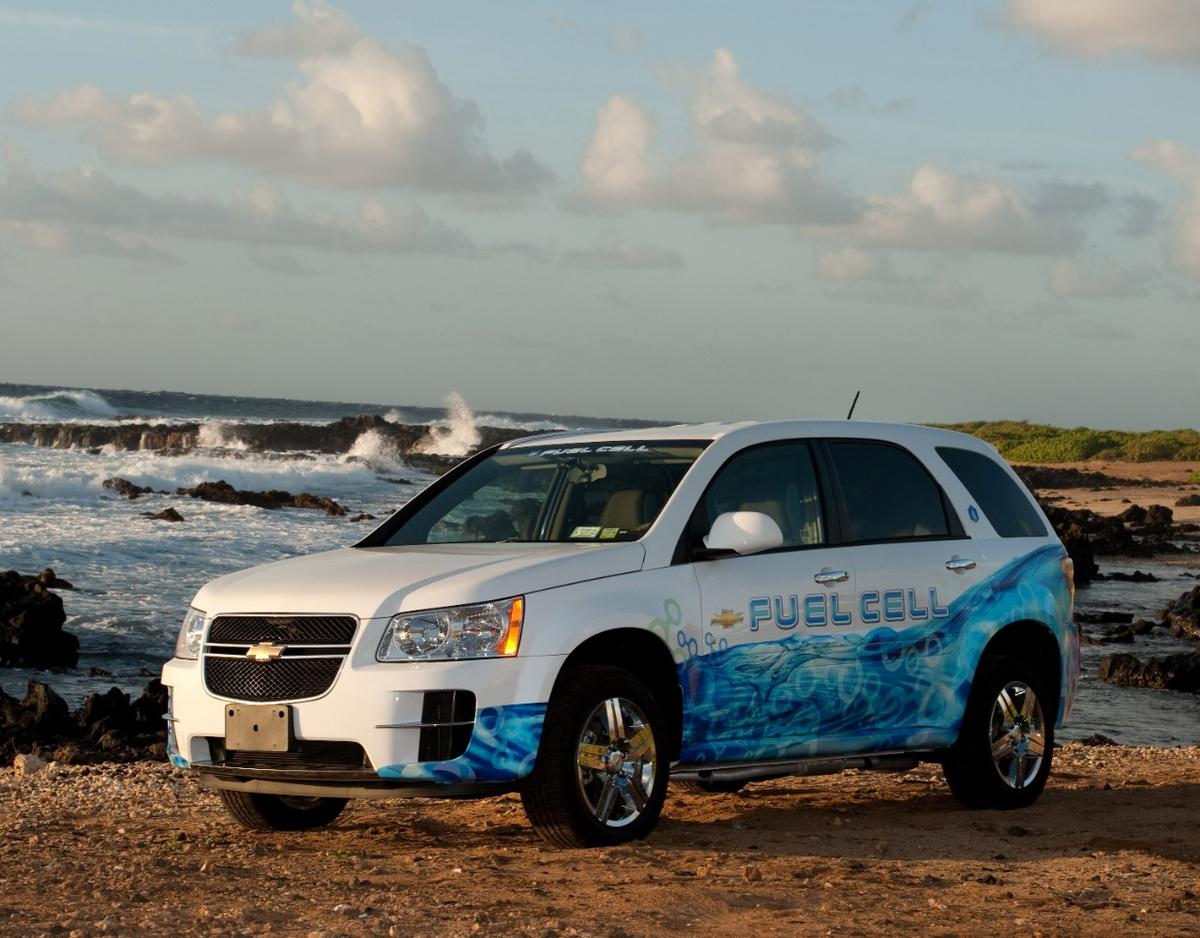 Several years ago, it seemed like the company was betting fuel cells would be the future of electric cars, but now they’re really pushing their battery-powered cars and they’re not saying much about their fuel cell program.

I caught up with Mark Reuss at the Detroit auto show. He's the head of Global Product Development for GM.

He says the company still has a hydrogen program; it just doesn't know where exactly it's going with it.

“We’ve worked very hard over the years to have leadership technically in the fuel stacks and the fuel cell program, and we believe we have that,” he says. “So we’ve got an open book on what we do with our fuel cell, but we’ve got a great technology here, so we’re very excited.”

Reuss said their program is moving forward. He says the U.S. Department of Defense plans to test some of their fuel cell technology in the field.

So where are we with the "four miracles" Secretary Chu talked about?

"Miracle" no. 1: Infrastructure for hydrogen

Of the companies I spoke with, this seems to be the biggest hurdle. If you have a hydrogen fuel cell car, where do you get your hydrogen gas?

GM's Reuss told me infrastructure is a big reason for why GM is holding back on a commercial release of fuel cell vehicles. That's why the more aggressive fuel cell carmakers, like Honda, are planning limited commercial releases in California - that's where most of the hydrogen fueling stations are in the U.S.

More from a statement from the Department of Energy:

In addition, the governors of eight states—California, Connecticut, Maryland, Massachusetts, New York, Oregon, Rhode Island and Vermont—signed a memorandum of understanding committing to having 3.3 million zero emission vehicles on the roads in their states by 2025.  FCEVs are an important part of this portfolio.

But as of now, fueling stations are definitely not widespread, so automakers are not likely to pursue hydrogen unless they see more investments in infrastructure.

"Miracle" no. 2: Fuel cells are expensive to build

Here's a basic explanation of how they work:

Platinum is the dominant material used in the catalyst of these fuel cells (the cathode and anode portion of the fuel stack).

The DOE tells me that over time, they've been able to reduce the amount of platinum required in fuel cells:

DOE-funded research has reduced automotive fuel cell cost to $53/kW projected at 500,000 units/year and $60/kW at 100,000 units/year. This is more than a 50% cost reduction since 2006. Cost reductions reflect numerous individual advances in key areas, including a five-fold reduction in the platinum content of fuel cell catalysts and the development of durable membrane electrode assemblies with low platinum group metal content.

The DOE says the durability of fuel cells has also been improving.

To get hydrogen gas, you have to make it. Right now, the cheapest way to get the gas is by reformulating natural gas. So right away, you're using a carbon-based fuel to get the stuff - not ideal.

Another way to get the gas is from water. Using electrolysis you can capture the gas from water. The question becomes: where do you get your electricity to do this? There's more research being done on how to do this with solar energy. And just like the fuel cells themselves, the DOE says the cost of doing so is coming down:

And even if natural gas remains as the cheapest way to get the gas, the DOE contends that "because a fuel cell is more than twice as efficient as an internal combustion engine, an FCEV travels farther on that tank of hydrogen than a traditional car would on a tank of gasoline."

Honda says it's also looking at purchasing the hydrogen by-product from refineries around the U.S.

To store enough hydrogen on a vehicle to get the 200 to 300 mile ranges we are accustomed to, the gas has to be pressurized.

High-pressure tanks that can do the job often end up being quite heavy, which starts to affect the car's fuel economy (the heavier the car, the less efficient it often is).

To make a tank that can do the job, carbon fiber is often used, and, once again, we're using an expensive material. The DOE responds that progress is being made here too:

So, the long and short of it is that progress is being made, but there's still a lot of work to be done for us to get to full commercialization of hydrogen fuel cell vehicles.

Carl Brauer, an auto analyst with car valuing and research company Kelley Blue Book, says when it comes to batteries and hydrogen fuel cells, it’s not an either-or.

“I always try to tell people that there isn’t a silver bullet when it comes to personal transportation,” he says. “Instead, there’s seven or eight bronze bullets. We’re going to have different technologies that work under different circumstances. And I definitely think there will be a place for hydrogen fuel.”

Brauer says where that place is, and how mainstream it becomes, is still in question. As of now, Hyundai has started leasing its Tucson FCEV, Toyota announced it will sell its Mirai FCEV, and Honda plans to roll out the FCV Clarity later this year. These will all be limited releases, but it's a start toward a test of the hydrogen-based economy.