Recognize the intersection in the above photo?
It's the corner of Sheridan and Broadway in 1936. Dig the old cars, the traffic cop near the middle of picture, the Walgreens store behind him and that well-posed woman in that wicked striped dress in the foreground.
This photograph is one of scores taken by the Illinois Department of Transportation from the 1920s through the 1950s. The photos documented the bridges, roads and infrastructure built by the agency across the city. And they provide a clear and fascinating look into Chicago's past. The Special Collections and University Archives, University of Illinois at Chicago Library has been kind enough to put this valuable resource online. The original photographers put in all kinds of helpful notes that are also cataloged. For instance, the above photo was taken at 8:36am and is looking west on Sheridan. They even included a location's longitude and latitude.
Check this out: The corner of 102nd and Yates. Today it is an area of brick Postwar homes. But in 1938, there was no war yet — not for the United States, at least — and no homes, except for that lonely apartment building in the distance to the right:

Look at the Queen Anne el station at Lake and Sacramento, 1939. Everything in this photo, including the station, is long gone. And what a shame that is. The Green Line tracks are still there: 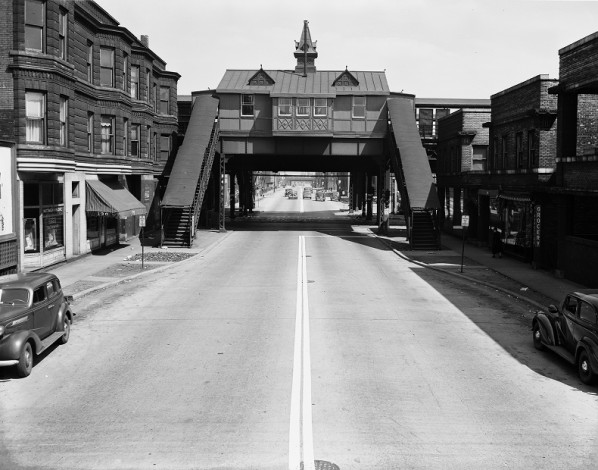 Let's end with this IDOT photo looking north on Michigan Avenue from Washington taken in 1937. What is now the Chicago Cultural Center is on the left. To the right you can see the old peristyle that once sat in Grant Park. The feature was demolished in the 1950s and recreated, in a smaller scale, when Millennium Park was built. And look at that giant sign on the northeast corner of Michigan and Randolph, where Millennium Park Plaza apartments are now: 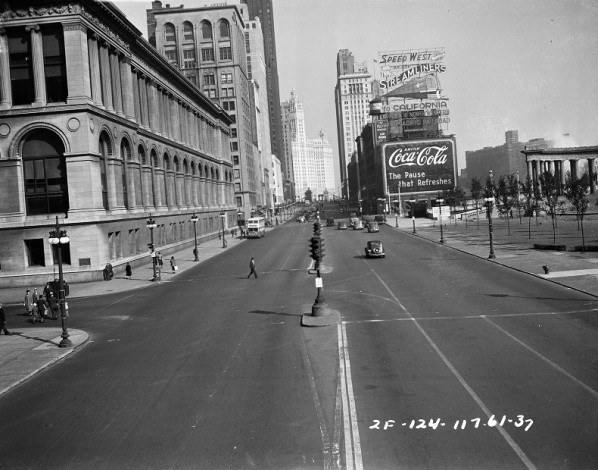