Patricia Bunkofst still lives in the farm house in Lowell, Indiana that her father built more than 60 years ago. That's where Bunkofst and her retired husband Bob raised their three children and now spend time with their four grandchildren.

But if a new Illiana Tollway is built, they worry their days there may be numbered.

That’s because the proposed route would come very close to their home and eat up much of their farmland.

“We don’t want it but I think it’s going to come through,” Patricia Bunkfst told WBEZ at a public forum Tuesday night at Lowell Middle School about 90 minutes south of Chicago.

The Northwest Indiana Regional Planning Commission (NIRPC) will decide whether to amend its Go To 2040 plan to include the Illiana Tollway. NIPRC is hosting a handful of these information sessions around Northwest Indiana over the next two weeks in Lake, Porter and LaPorte counties.

NIPRC official Mitch Barloga says a staff report on the tollway will be completed in the next week or so and will be provided to NIRPC’s board members, who will decide the project’s fate in December.
Unlike the Chicago Metropolitan Agency for Planning (CMAP), NIPRC’s staff report will not provide a recommendation on whether the Illiana should be built.

Last month, CMAP’s staff report recommended against Illinois investing $1 billion toward the tollway, but CMAP’s policy committee narrowly approved adding it to its own Go To 2040 plan anyway. 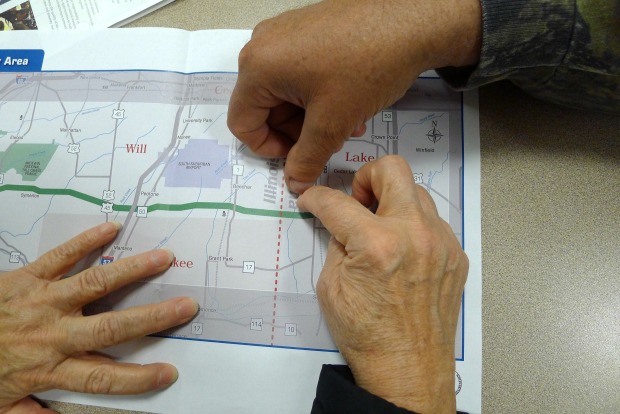 The Illiana Tollway is a joint project by the states of Illinois and Indiana. It has the support of the transportation departments of both states, along with Illinois Gov. Pat Quinn and Indiana Gov. Mike Pence.

The latest proposed route for the 47-mile Illiana would cut through farmland and some residential areas from I-65 near Lowell to I-55 near Wilmington in Will County, Ill. Proponents say the Illiana is needed to relieve truck congestion on I-80/94 and help spur economic development, including the long proposed third Chicago airport in Peotone. They say the Illiana would be paid through a combination of public and private funds.

In October, CMAP heard from landowners and other opponents who say the tollway will destroy farmland and threaten nature areas such as the Midewin National Tallgrass Prairie in Will County.
Those same concerns were echoed at last night’s meeting in Lowell.

Bob Bunkofst says one of the difficult parts of this process is waiting to see what happens. He says he’s reluctant to invest in his home but needs to make repairs.

“I wish they would tell us if it’s going to go through or not so we can get our plans to go look for a different place, instead of letting us wait and wait and wait,” Bunkofst said.

Gary Kistler says he’s holding out hope that the Illiana may not be approved by Indiana. 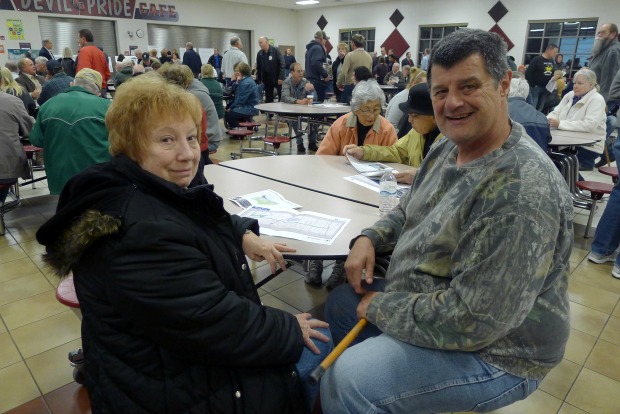 “It’s going to be a hundred feet from my house,” Kistler said. “I don’t think it’s a done deal. I think there are enough ‘no’ votes on NIPRC but you never know.”

It wasn’t only Indiana residents who showed up to write their opposition on note cards that were then handed to NIPRC officials. Nicole Issert of Peotone, Ill. says she hopes there’s still a chance the project can be voted down in Indiana, since Illinois officials have already approved it.

“Our farm is about 110 years old. If the Illiana goes through, it will cut our farm in half. We’ll lose about 78 of our 400 acres. That’s a big chunk. Our farm is considered a small farm,” Issert said. “It would change my family’s livelihood.”

One of the voting members is Hammond, Ind., Mayor Tom McDermott Jr., who attended the meeting to speak with residents.

“I’m truly on the fence. I’m making sure I educate myself properly on an important decision,” McDermott said.

With 81,000 residents, Hammond is Northwest Indiana’s largest city and will have the most votes when NIRPC votes on the issue. Hammond is about 30 minutes north of Lowell and is largely urban.

McDermott says he is concerned about the Illiana drawing away residents and businesses south to Lowell. And because the Illiana could help support an eventual airport in Peotone, he’s worried about the effect on Gary Chicago International Airport, which is close to Hammond.

“Here in Northwest Indiana, the airport is also a big deal. Does this make it more likely that Peotone is going to happen? That’s a big question mark. Is this going to prevent us from moving forward with the Gary airport? That’s a big question mark,” McDermott said. “Is it going to make it easier for people in my city to move to Lowell or to Cedar Lake or to other places down south?”

But Indiana Governor Mike Pence is urging a ‘yes’ vote.

At Tuesday’s meeting in Lowell Indiana Department of Transportation spokesman Jim Pinkerton continued to tout the benefits of the Illiana to anyone who would listen.

“One of the main components is to relieve congestions on the Borman Expressway (I-80/94),” Pinkerton said. “By taking that traffic off the Borman, we feel we can reduce traffic on the arterial roads like U.S. 30.”

“If you’re going to be the crossroads of America and have a transportation network like we have -- rail, interstate, air, ports -- you’ve got to be able to move traffic through in an efficient manner,” Pinkerton said. “We think this is a project that will help to that end.”

NIRPC will take a final vote on the Illiana on Dec. 12.