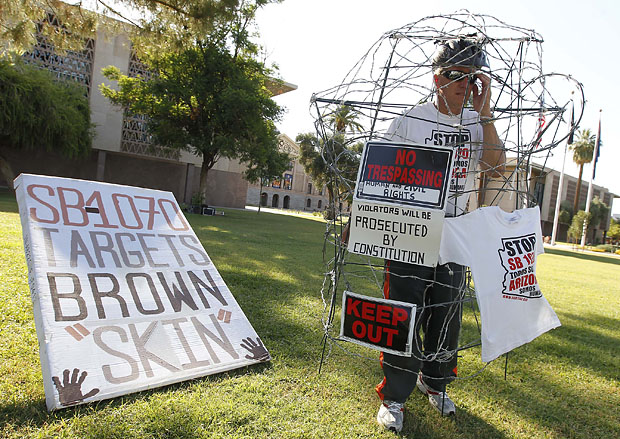 I asked Chris Bergin, a veteran immigration attorney with the Shiller/Preyar Law Office, about what directives the Supreme Court had laid out when it upheld today Arizona’s “papers please” section of the state’s controversial immigration law.

Here’s the deal, as Bergin explains:

*Section 2(B) allows state and local law enforcement to make a reasonable attempt to determine the immigration status of a person stopped, detained or arrested on some other legitimate basis, if "reasonable suspicion" exists that the person is illegally in the U.S.

But there are three limits on this section:

So I asked Bergin: If the police cannot use race, color or national origin to make a determination that someone might not have the legal authority to be in the U.S., what guidelines did the Supreme Court outline to help them do their job when asking suspects for their documents?

“Well, they didn’t,” said Bergin. “The Supreme Court didn’t say anything about that. If someone volunteers that information, then the police can use it.”

“Technically, if the police pulls you over and you don’t have a license, then you get taken in,” explained Bergin. “If you have no license and no state I.D., then it might be all right to check your immigration status. But they did not lay down any specifics. This will have to go back to court, obviously. And each state will be quite messy for a while. In reality, the court really avoided the issue. Clearly there’s racial profiling. That’s what going on, that’s what’s been going on. And if you leave it up to local authorities and you have an aggressive governor like Jan Brewer and a sheriff like Joe Arpaio, then when there’s racial profiling, they’re just going to cover it up.”

The court said it was too early to determine if Section 2(B) will conflict with the federal system until the section is interpreted by the Arizona state courts. But if the state courts allow things such as prolonged detention while checking immigration status, then future challenges to the state law are almost guaranteed.

“Overall, the Supreme Court decision is a defeat for the anti-immigrant forces in Arizona and across the U.S.,” said Bergin.  “In a state like Arizona, in which Sheriff Joe Arpaio hunts down and humiliates undocumented people, it would be hard for me to believe that race and racism would not be part of the reason why people's immigration status would be checked.”

Other aspects of the Arizona dealt with today were knocked down by the court: