The staff at Asian Americans Advancing Justice has been busy registering new voters and planning their exit poll strategy for Tuesday. The organization wants to increase visibility for the Asian community.

But Kathleen Yang-Clayton with the organization says that’s difficult when even the staff is misidentified.

“He identifies as Japanese-American, multi-racial and he was listed as African American,” Yang-Clayton said of one of her co-workers.

Many campaigns and advocacy groups like Advancing Justice use a database to target voters. Yang-Clayton took a little sample in her office, researching all of her co-workers, most of them Asian. Exactly half of the 14 were incorrectly identified.

“Brian Hara who also identifies as Japanese-American was listed as Caucasian, Irish,” she said.

Chicago has more than 1.4 million registered voters. The database shows just over 35,000 Asians are among the voting population.

“That’s already what we empirically have experienced as being under counts,” she said.

When you register to vote, you give your name and address. You check a box saying you’re a citizen and if you’re of legal age. But campaigns know more about you than that -- like your race, age, past voting behavior.

“I can also see household income and the car that you drive and some cases, your magazine subscription. And I can use this information to find out what you might be interested in,” said Michael Miller, an assistant professor in political science at Barnard College.

Miller has worked on a number of campaigns as a strategist. The refined information he’s talking about is called micro-targeting. He says any campaign that wants to be successful needs this.

“You can cut turf so that you can have walkers just dropping literature for the people who you know are going to vote for you,” he said. “Maybe a reminder to go out to vote. Others are going to be trying to have conversations with folks the campaign thinks are persuadable.”

Testing out the voter database — one hit, one miss 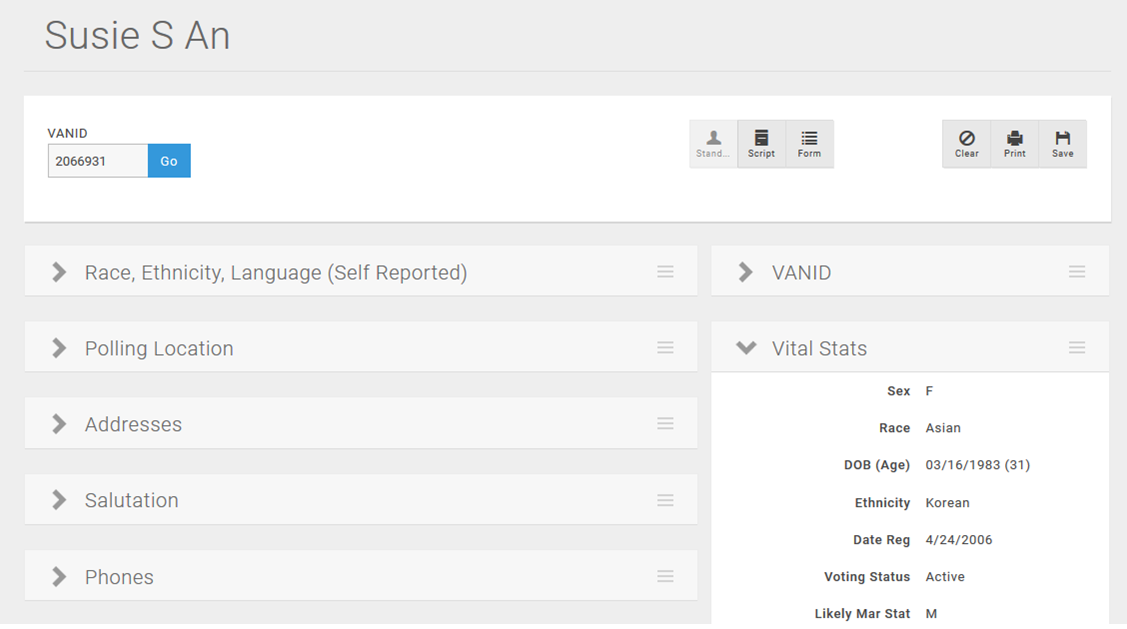 Just to test it out, we entered my name into the database. The information showed my race as Asian and ethnicity as Korean. That’s correct. But then we entered in the name of my colleague Odette Yousef. The database said her race is Hispanic and her ethnicity is Mexican. Odette is actually of Middle Eastern descent.

These data errors might seem a little funny, but Yang-Clayton says the difference in numbers could dictate the way campaigns do outreach and the language they do it in.

“What we’ve seen in the data we use from VAN is that when there’s a systematic undercounting, the impression that’s given is that Asian Americans don’t vote. So why make the effort,” she asked.

Bryan Whitaker with NGP VAN, the company that maintains the database website, says the voter lists are generally good, but admits there are flaws across the board, not just for Asians.

Whitaker says he lives in a predominantly African-American community in Washington, D.C.

Whitaker, a white man, says campaigns try to appeal to him as if he is African-American. He says he’s likely misidentified as being black because of his neighborhood.

He says the data is collected and analyzed by a separate group. They collect information from boards of election, marketing research and the U.S. Census. However, census data is based on the census tract and not at an individual level.

Whitaker says the lists are meant to be used as a starting point for campaigns.

“A successful campaign will have a volunteer in those neighborhoods who is checking the lists before they actually go out and start knocking on those doors. That’s the quality assurance check on those lists,” he said.

Yang-Clayton says the group Asian Americans Advancing Justice is able to make corrections to their own list, but that won’t show up system-wide. And she questions whether campaigns actually take the extra steps.

Asians make up about 5.5 percent of the city’s population. Yang-Clayton feels data inaccuracies hurt smaller groups like this.

“Every point that’s shaved off because they're misidentified or you don’t click the right radio button to add people in has a significant impact,” she said.

She says improvements could be made with finer data or even if the state has voters self-identify themselves.

Yang-Clayton says better data could show that Asians have a bigger influence on election day.

Susie An is a WBEZ reporter.