The culture wars are always percolating beneath the surface in presidential politics – until something or someone pushes it to the surface.

That something early in this cycle is the Indiana "Religious Freedom Restoration Act," which Republican Gov. Mike Pence, who is considering a run for president in 2016, signed into law last week. It has caused a firestorm of criticism from those who say the law could lead to discrimination against gays and lesbians, including businesses likeApple and Angie's List, the NCAA, which is hosting the men's college basketball Final Four in Indianapolis, and even other states like Connecticut, which banned state-paid travel to Indiana.

Pence seemed surprised by the backlash and has had some difficulty explaining his position. Other potential 2016 candidates have leapt to his defense and, some, like Florida Sen. Marco Rubio, went further than the Indiana governor.

As often is the case in controversies the facts have become muddled and conflated. So what are the facts? How are the two laws different? And how have politics on both sides shaped the response?

Seeking 'Clarification' and a 'Fix,' As The Contenders Weigh In

On Tuesday, Pence said there has "been misunderstanding and confusion and mischaracterization of this law." But he said he is seeking "clarification" and a "fix" to the law with legislation "that makes it clear that this law does not give businesses a right to deny services to anyone."

On Monday, though, the law became part of the presidential campaign with Republican presidential candidates weighing in after a Sunday show performance from Pence that raised more questions. Pence sidestepped half a dozen specific questions about whether the law could lead to discrimination against gays and lesbians.

Former Florida Gov. Jeb Bush contended that facts had not been established, and once they are, "people aren't going to see this as discriminatory at all."

Wisconsin Gov. Scott Walker backed the law and said through a spokesperson that it was about "the right for Americans to exercise their religion and act on their conscience."

Rubio, though, did something the other candidates did not. He more directly addressed the charge that businesses could discriminate against gay and lesbian couples. Gay rights advocates, for example, say if a gay or lesbian couple wanted a flower arrangement or cake for a reception, a florist or caterer could lawfully choose not to fill the order, if they have a religious objection.

Rubio said he thinks businesses should have that right.

"The issue we're talking about here is should someone who provides a professional service be punished by the law because they refused to provide that professional service to a ceremony that they believe is in violation of their faith?" he said on Fox News Monday. "I think people have a right to live out their religious faith in their own lives."

Most conservatives, including Pence, have mostly not addressed that charge head on. Instead, they say, the law is unfairly maligned. After all, other states have similar laws and even Democrat Bill Clinton signed a federal "Religious Freedom Restoration Act" into law as president.

Hillary Clinton, for the record, tweeted: "Sad this new Indiana law can happen in America today. We shouldn't discriminate against ppl bc of who they love."

The White House on Tuesday blasted Pence and others, who "falsely suggest" the two laws — Indiana's and the federal one — are the same.

"That is not true," White House Press Secretary Josh Earnest said at the White House daily briefing. He cited the spirit of the law as well as the text. He said the 1993 law "was an effort to protect the religious liberty of religious minorities based on actions that could be taken by the federal government."

On the other hand, "The Indiana law is much broader," Earnest continued. "It doesn't just apply to individuals or religious minorities. It applies to, and I'm quoting here, 'a partnership, a limited liability company, a corporation, a company, a firm, a society, a joint stock company, or an unincorporated association.' So this obviously is a significant expansion of the law in terms of the way that it would apply. ... [T]his is a much more open-ended piece of legislation that could reasonably be used to try to justify discriminating against somebody because of who they love."

First, let's start with how and why the 1993 law came to be. The federal law stemmed from an Oregon Native American man, who lost his job in 1990 after testing positive for drugs. He had used peyote as part of a religious ritual. The "fix" to that problem became the federal RFRA, introduced by soon-to-be Senate Minority Leader Chuck Schumer, then a House member from New York. A companion bill passed the Senate and was introduced by the late Sen. Ted Kennedy.

Nineteen states, in addition to Indiana, have since enacted their own RFRAs, but asThe Atlantic notes, just South Carolina and Texas have similar variations to Indiana's and neither seems to go quite as far.

Indiana vs. Federal Law — What Do They Say?

The Federal RFRA states that "Government shall not substantially burden a person's exercise of religion even if the burden results from a rule of general applicability...."

The Indiana law also states, "a governmental entity may not substantially burden a person's exercise of religion, even if the burden results from a rule of general applicability."

But that's where the similarities end.

The federal law does not go so far as to define a "person." Indiana's law does. And a "person," by their standard is not what you might think.

Section 7 of the Indiana code includes people, churches and corporations in that definition:

As related to whether, why or who can sue, the federal law says:

The Indiana law goes further. In Section 9, it states that "a person," in this case meaning an individual, church, limited liability company, etc., "whose exercise of religion has been substantially burdened, or is likely to be substantially burdened, by a violation of this chapter may assert the violation or impending violation as a claim or defense in a judicial or administrative proceeding, regardless of whether the state or any other governmental entity is a party to the proceeding."

So, in other words, while the federal law states that a person can sue the governmentfor a grievance, Indiana makes a point of stating that it doesn't matter if government is involved.

Josh Blackman, a constitutional law professor at South Texas College, notes inNational Review that while some read the federal provision as pertaining only to government, it has actually split federal courts. "Private parties," he points out, "had brought suits against corporations."

For example: "[T]he D.C. Circuit held that the Catholic University of America could raise RFRA as a defense against a sex-discrimination claim brought by a nun and the Equal Employment Opportunity Commission alike.

That said, the Indiana law explicitly wipes away any ambiguity.

It's something Republican pollster Whit Ayres likens to approval of interracial marriage in the 1970s to 1990s. In his book, 2016 and Beyond: How Republicans can elect a President in the New America, he points out, citing Gallup numbers, that in 1972, some 60 percent of Americans disapproved of interracial marriage. Twenty-five years later, 64 percent approved with the lines crossing when the country split about evenly in 1983.

"It looks similar to gay marriage," Ayres told reporters at breakfast meeting sponsored by the Christian Science Monitor. "The values of young people, I believe, this is where we are headed as a country." He added, "We are headed to where a political candidate, who is perceived as anti-gay will never connect with people under 30 years old."

But going inside the numbers helps explain why both sides are singing very different tunes on the Indiana law. For example, Gallup found that 3 in 4 Democrats are in favor of same-sex marriage (as were almost 60 percent of independents), but the opposite was true for Republicans with 72 percent opposed, as of 2013. 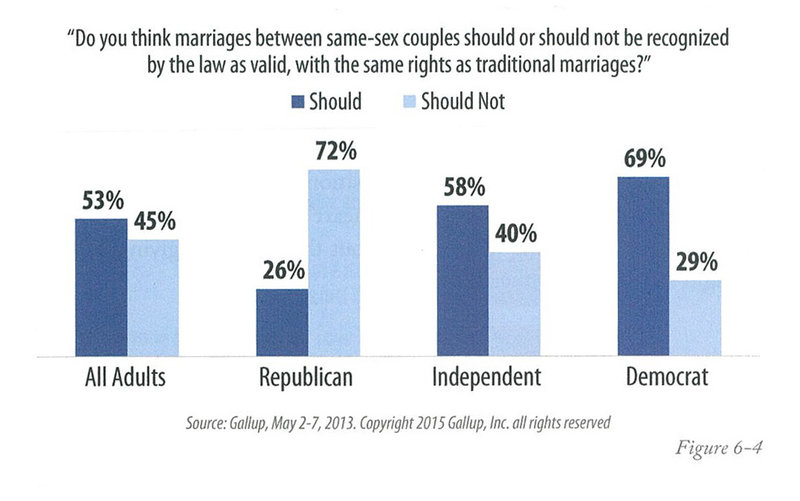 That makes it difficult to get through a Republican primary being too strongly in favor of gay rights with a significant portion of the base considering themselves "social values" religious voters.

"That's a challenge," said Ayres, who is advising Rubio.

He points out that younger Republicans under 30 are in favor of same-sex marriage. A Pew poll in 2014, in fact, found 61 percent of young Republicans in favor.

So, while times are changing with Republicans on gay rights, they are doing so more slowly than the more rapid change taking place in the country at large.