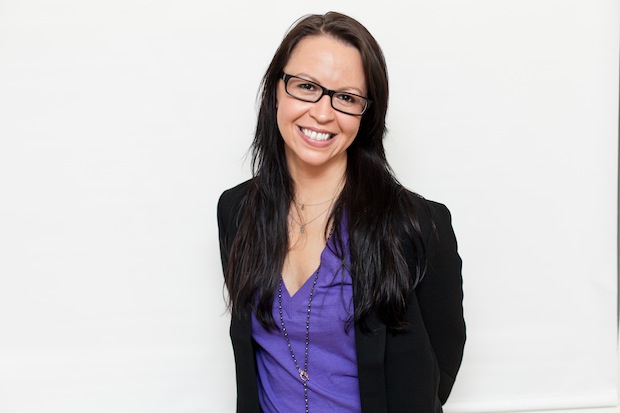 I chat with a homegirl today, who grew up in the Chicago suburbs before moving to New York, where she spent a decade on staff at Entertainment Weekly, cofounded SexyFeminist.com, and now writes for several publications, including Women’s Health, Runner’s World, Writer’s Digest, Fast Company, and New York‘s Vulture. Jennifer Keishin Armstrong's history of The Mary Tyler Moore Show, Mary and Lou and Rhoda and Ted, is coming out on Tuesday, while  her collaboration with Heather Wood Rudulph, Sexy Feminism, was released earlier this year. She has provided pop culture commentary for CNN, VH1, A&E, and ABC and teaches for Gotham Writers' Workshop. You can learn a lot more about her here.

I’m guilty of this myself but often, women criticize other women’s definitions of feminism. What were some criticisms you anticipated people lobbing towards Sexy Feminism that you wanted to head off at the pass and address within it?
We knew when we named our website Sexy Feminist (and then our book Sexy Feminism) that we were being a little, you know, provocative. But we knew it would start specific discussions, and we were right. Our thing is that we're definitely NOT delineating ourselves from other feminists somehow—you know, we're sexy feminists, and the others aren't—but we're saying that, despite continued misperception, ALL feminism is sexy. And we'll stop calling our website Sexy Feminist when everyone gets that. The idea is to stop people who have not necessarily identified as feminists but who are feminist-curious to look at the book or the site and want to learn more.

Tell me about the cover of the book: what were some other possibilities (if any) that were considered?
The only other possibility we got from the publisher was a very straightforward cover with no photos or graphics, which we thought was a little ... less than exciting, given the provocative name. This was the alternative we ended up with after sharing that feedback with them, and we felt okay about it. It's attention-grabbing, and that lipgloss is so fantastic that I ended up going out to hunt down anything I could find at Sephora that came close. (Hot tip: Tarte's lip crayon in "Enchanted" is my new favorite toy, and Tarte is one of our feminist-friendly cosmetic companies named in the book. Win win!)

What do you think are examples of pop culture that got feminism right both in terms of definition/idealism but also by demonstrating it in an everyday, practical way?
I feel a professional obligation to say this, but I also believe it: The Mary Tyler Moore Show. They weren't trying to be feminist, but the movement was so much in the air at the time, and they had so many feminist-identified women writing for the show, that it came through. I always say Mary Richards was the original Sexy Feminist. She really came into her empowerment throughout the series, and we saw her argue for equal pay to her male predecessor, we saw her talk about the pressures of being the only woman in the newsroom, and we saw her (mostly in later years) assert herself strongly with men. In one of the last episodes, she even asked Lou Grant out. It didn't work out, but still.

You’ve written books about The Mary Tyler Moore Show and the Mickey Mouse Club. What are some books about shows you’d read if they were written  (but don’t want to write yourself?)
I love this question, because I can tell you that when figuring out my next book (which is now officially Seinfeld) I basically just pored over lists of TV shows. The ones I feel like I definitely can't tackle are sci-fi shows: I love some of them but don't have the geek-level knowledge required. So I think about stuff like Buffy the Vampire Slayer or Lost. Those are the two that I think could hold up to book treatment, but I'm not necessarily the right author for them.

Tell me about what you do as a career coach/consultant. And what do you do when you feel like you need consulting?
I'm very good at running other people's lives! Actually, I have to admit I think I've had a pretty good run in my own career so far, and I really do like helping other people figure out how to make those key decisions that can make a difference. Most of the time, it's that people are simply frozen into inaction by fear—fear of failing, fear of succeeding. And writing, in particular, is such a baffling career path full of constant decisions. You don't just take the corporate job and then wait 50 years so you can get your gold watch. So I can talk to clients about everything from getting their first few publication credits to moving to the next level of publications to getting an agent or going freelance full-time. It's funny you ask about what I do when I need consulting, because I've just recently started feeling that itch, like, okay, what now? I've started looking for mentors to befriend so I can ask them for a little advice in exchange for a few rounds of drinks; I also went to a great conference last week run by ASJA, and got tons of ideas for ways to advance my career more.

What’s something really unfeminist that you like? (Sometimes I dance to really misogynistic music.)
Oh, man, I do love me some "In da Club" and "Big Pimpin.'" They're just good songs. I also happen to really enjoy watching The Bachelor/Bachelorette. I always say I will allow myself to watch them because I have studied media and feminism enough that I watch them with a (very) critical lens, and because I don't personally have a Nielsen box, so I'm not actually affecting the ratings. If I get a Nielsen box, it must stop immediately.

When you worked at Entertainment Weekly, which fanbases tended to respond most rabidly when you wrote about their favorite show/artist/movie etc?
Well, despite my claims that I couldn't write a whole Lost book, I did do some reporting on Lost in my day, and, you know, you can imagine that fan base. But more surprisingly, people get just as into their Grey's Anatomy, for instance. I used to recap that and couldn't ever read the message board comments. They were very, very passionate, and channeled that passion into being not-always-kind to me.

Who are some of your favorite sexy feminists in pop culture (and you cannot name either Tina Fey or Amy Poehler.)
Ha! Those ladies do rule, but I've been totally enamored of Lena Dunham of late. If you watch or read her interviews, man, that girl is scary smart. And a totally out-and-proud feminist. She takes the loads of criticism of her work quite beautifully, and I think her constant nakedness onscreen really is revolutionary the way she does it. We truly do need to see more body types besides 90 pounds and 5-foot-10 with Olympic-level abs. I also adore Mindy Kaling, and her show does a lot of subtly feminist things: Her character is great at her job and clearly smart, even though she's a little boy crazy and talks like a teenager. But more importantly, she has this insane sexual confidence that I think makes her a strangely wonderful role model to young women. Also, she's unbelievably funny, in her own way.

You’ve worked with Heather Wood for a long time (back when I interviewed you for MBToolBox about Sirens Mag.) Why do you two work so well together and what tips do you have for working with a longtime collaborator?
We definitely just have that mind-meld thing happening. We're each totally comfortable letting the other speak on our behalf as a team. I'm an independent spirit, but it's nice to have a collaborator to fall back on sometimes when your life gets crazy with book deadlines or personal stuff. It's the best when I log onto the site and see that she's posted new content or edited a piece I'd been neglecting. We can talk each other off professional ledges sometimes, too. The main thing is to treat it almost like a romantic relationship. Keep lines of communication open and constantly express appreciation. One of the things I've noticed we automatically do, and I like, is to always thank each other. If she sees that I put up a new post, she thanks me. If she does our taxes, I thank her. I've actually carried this over into my romantic relationship, and it works wonders!

How does it feel to be the 347th person interviewed for Zulkey.com?
I feel really good about that number. There's something auspicious about it.