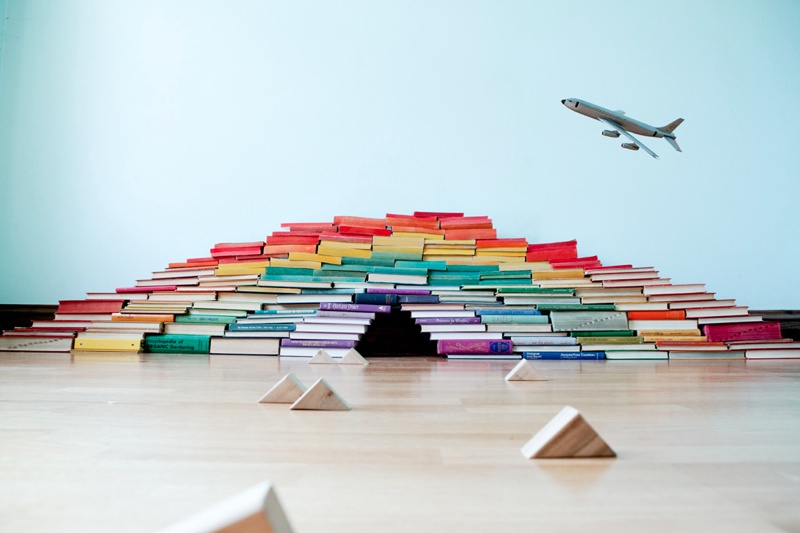 My husband, Steve, and I confessed to our friends Anna and Evan that neither of us is a big fan of flying.

“Well, when I told Evan I was afraid of flying, he said ‘Just think–you’re sitting in the sky,’ and I wasn’t scared anymore!” chirped Anna. Steve and I smiled politely and said we’d try thinking that next time we flew. Later on, Steve said, “I like Anna and all but I’m sorry, that was just dumb.” This is why I love him.

I come from a genetic mix of flying-fearing. It’s not unusual for my dad, who travels for business frequently, to get on a plane five or six times in a month. For him, a plane is just another place for him to fall asleep, one more leg of a trip that will eventually take him back home. After one flight, he told us that the landing gear was sticky and a stewardess had asked him if he’d be able to help manually lower the gear if necessary.

“Weren’t you scared?” I asked, incredulous. I always figured that if I was told something like this, I would will my heart to stop beating or bash my head against the side of the plane in order to avoid having to face the terror.

“No, I made peace with God,” he said, and I believed him, even though I wouldn’t have felt the same way myself.

My mother doesn’t love flying but the way her personality works, it’s clear she’s battling the fear for control and she’s got the fear by the neck. She took classes and even saw a hypnotist for her fear years ago. Then she discovered flying drugs, but she tries not to take the pills unless she can absolutely necessary. One of the ways she helps the fear is by checking with the pilot, as she boards the plane, whether they have enough gas for the trip or if the plane will be de-iced. This small amount of mothering seems to help.

Me, I’m afraid of the fear. Takeoff I don’t care for but once we level off, as long as the ride is smooth, I’m okay. I don’t understand why the pilot tells you sometimes there will be turbulence yet won’t explain why we can’t avoid it, or why s/he never comes on, during the bumpy parts, to explain that turbulence isn’t really a big deal. Would that be so hard, just to say “I know it’s scary but it’s going to be fine”? When it’s rocky, I try to remember some trope someone said once about turbulence being likes waves are to a boat. But don’t big waves sometimes capsize boats? I forgot how that goes.

There are a few traditions that help. I used to touch the outside of the plane before I boarded to keep it from crashing. Then one time I forgot so now I don’t touch the plane in order to keep it from crashing. I must work on a crossword or even better, a Sudoku as we take off (two hobbies I never participate in when I’m not on a plane). I must have a clean in-flight magazine in order to do this. I need to be able to watch the ground as we descend: People who keep the shades drawn upon descent are sadists. What happens if we land and I confuse it with a crash?

But by and large, I manage. I had a friend who pointed out once, “Sure, you might not like flying but you still get on the plane. You still make plans for when you land.” This reassures me, that deep down, I’m not as afraid as I think I am. Once, flying on my own from the States to the British Virgin Islands, I realized I’d have to fly one leg on a tiny prop plane. A part of me wanted to refuse and turn back home to Chicago, but the survival-believing side of me won out. The tiny plane was loud and it seemed wrong that I could reach over and grab the controls if I wanted to, but as we rose above the ocean, I realized that I strangely felt more in control than I did on bigger planes. We weren’t that high up and I could see all around me. It was beautiful. It was like a ride; maybe not one I’d want to take again anytime soon, but different, and not worse, than the big planes.

I have since come to realize that in the list of ways I’d least like to die, plane crash is no longer first. Chimpanzee-mauling is first.

Steve is afraid-afraid though and medicates accordingly. Once I suggested he see what would happen if he tried to fly without any drugs whatsoever. Things went fine until we were up in the air and I saw a wild look in my husband’s eyes. He began to breathe heavily and couldn’t concentrate on my attempts to calm him down. A small part of me worried he’d be that person who opens the plane door and jumps out. I gave him a pill. Last year, he and I flew from Rome to London and I tried to go pill-free but during some rough bumps I myself threw back an emergency pill with a full glass of white wine. You do what you can.

The pills can be misleading. They don’t make you more unafraid. They just make you more sleepy. I like sleeping on the plane, because it’s a good way to kill time and being asleep is better than being awake and scared. However, the pills, they don’t mess around. Take more than one, or more than one with some alcohol and you’re in for a rough time on the ground: grogginess, thirstiness, a fuzziness that never seems quite worth it. I’m unafraid enough to know it’s not worth it but sometimes I forget, like on the trip to London, where I just needed the illusion that I could be less frightened. Steve isn’t always as good about remembering the two sides to the pill. Once, he took more than one pill and drank more than one drink and called me, disoriented, once the plane had landed. “The stewardess is mad at me...” he mumbled. “I lost my wallet.”

“You lost your wallet on the plane?” I asked.

“I think so,” he said. Once he sobered up later I yelled at him the way wives are supposed to and then suggested that in the future he avoid mixing pills and booze. He seems to have an easier time of this when we fly together. Typically we’ll pop a pill and have a beer at the airport’s Chili’s-like place before we board. We hold hands during takeoff. When we land, he’s as affectionate as he ever is, kissing me and telling me he loves me, which I joke is an effect of the pills and booze but I know is because he’s just glad he has a pal there. I’m not as good a pal as to replace all the pills and all the booze but I can replace some of them.

I realized a few years ago that I thought I had reached that place that my dad had referenced about being at peace with God. I’ve lived a lovely life, accomplished a lot of my professional goals already, have wonderful people around me and, thanks to planes, seen some amazing places. My life would be abbreviated but it would still be damn good one even if it ended early, and I felt very lucky knowing this.

However, my “I can die early” and pill days are both over, at least for a while. Steve and I going back to the islands this week, for what I suppose you might call a “babymoon.” When you’re pregnant, you can’t take plane pills and you definitely can’t combine them with alcohol. I hope the flight is smooth, but even if it’s not, I’m still not that scared, because what comes next, after we come back, occupies my mind more than any possible bumps or delays. The flight home will be our last flight as a childless couple, and after that is when the real adventure begins.