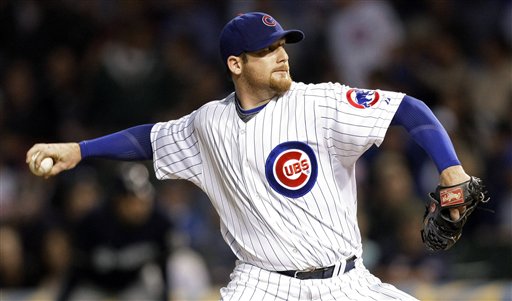 Ryan Dempster's nine-year run with the Chicago Cubs may be nearing an end. The 35-year-old pitcher will be a free agent by the end of the season, and with the addition of a wild card for each league, a player like him is a desirable commodity. As team President Theo Epstein explores ways to improve the club, this veteran pitcher could garner some future prospects for the Cubs' roster. A trade would likely occur soon, as the non-waiver deadline is July 31st.

Presently, though, Ryan is on the 15-day disabled list with tightness in his right lat. His injuries have stalled any talk of a trade – for now. Epstein told the Tribune this week, "Generally when players have minor injuries, it’s typical to wait until they come back and re-establish health before engaging in any serious trade talks."

Dempster has been a hard luck pitcher with a 3-3 record and an incredible 2.11 ERA; he has not given up a run in 22 innings. I spoke to the clubhouse leader and a media darling recently. The Cubs right hander said he knows baseball is a business, but told me it is still difficult for him to fathom a club change. “It’s my 9th season in Chicago and I love it. I enjoy every minute of it,” he said. “If there’s a chance of me going somewhere, obviously, and they present that to me I’ll have to look at it. But I’m trying to do what’s best for the Cubs no matter what it is.”

Dempster lamented that he hadn’t been able to provide the long suffering Cubs fans a chance to celebrate a World Series. “The end of my career is closer than the beginning was,” he said. “I feel like I could play a lot longer, but you never know."

"A lot of guys go a long time with never even getting a chance to play for [a World Series title]," Dempster added. "Hopefully it’s here that that happens, but I’ll be prepared for whatever happens.” Since he has a no-trade clause in his contract, Ryan has the power to accept or reject any trade offers. The irony is that he could have a shot at a championship this year if he is dealt to a contender.

Dempster's departure would be bitter-sweet for Chicago, especially since he's become involved with charitable work through his Dempster Family Foundation. The foundation provides financial support to programs that assist and comfort critically ill children. It also supports youth baseball programs, military families and animal shelters. Dempster says his decision to be involved with charities stems from his childhood in British Columbia. “We didn’t have a lot of money,” he said. “People helped us out along the way.”

“I’ve always felt that it’s part of your duty as an athlete. . . if we can help out a little bit, even if it’s one kid along the way, it’s worth it,” he added. “Leave your footprint a little smaller and leave the world a better place – that’s what my Nana always told me.”

A few years ago, the foundation had a very personal mission: to raise awareness and funds for a rare genetic illness suffered by Riley, Dempster's young daughter. 22q11.2 Deletion Syndrome/DiGeorge Syndrome or VCFS is a chromosomal abnormality that can cause a wide range of health and developmental issues, from heart defects and breathing issues to autism and developmental delays. Happily for Dempster and his family, three-year-old Riley is doing well and is no longer tethered to cords and machines. She now enjoys being the middle sister to older brother Brady and younger sister Finley.

As for a potential baseball trade, it wouldn't just impact Dempster: He said he will consider his family in any deal the Cubs present to him and do what it best for them “first and foremost." But it seems likely he will accept a deal. With the Cubs mired in last place, Dempster could likely be wearing another team's jersey very, very soon.