School budgets are reportedly shrinking across the city this year and it’s causing a lot of uproar. But as the debate over Chicago Public Schools’ current budget continues, Curious City is digging into a question asked by a mysterious commenter.

The original question came from a questioner who goes by “Tim.”

I recently learned the annual budget for Tilden High School. I then divided that number by the total number of students at Tilden and learned that Chicago is spending $175,000 for each student per year. That is 5 to 6 times the cost of sending a kid to the best private high schools in the state. How do we justify the absurd amount of money Chicago spends to educate a child?

I made several attempts to reach Tim, but heard nothing back. Then I saw the following comment pop up on a recent story from a commenter named “greg”:

So I tried e-mailing “greg” to see if he was our questioner. Again, no luck.
Our mysterious commenter’s question about the “absurd amount of money” spent at Tilden is a loaded one — and one we can’t (and maybe shouldn’t) answer for you. We can, though, get across some basic information, such as how much CPS spent to educate children at Tilden and how that compares to other schools. At that point, you (as well as “Tim” and “greg”) can start a discussion about what spending — if any — is absurd.

The short answer on Tilden

I called Allan Odden, a researcher at the University of Wisconsin-Madison and an expert in school financing. Here’s what he told me about that $175,000 figure:

“There’s no high school in America that spends that amount,” Odden said. “It’s not even in the same ballpark.”

Then what does Tilden High School spend per student every year?

I tried to follow Tim, or… greg’s, math. He says he took the annual budget for Tilden High School and divided it by the number of students.

CPS breaks out each individual school’s budget in the budget book and using those numbers, here’s my back-of-the-envelope calculations for the last three year’s budgets:

Odden and others I spoke to say these numbers are closer to what they expected.

On average, public high schools in America spend around $12,000 per student according to the most recent data collected by the U.S. Department of Education. But recently, Tilden — a struggling school in Chicago’s New City area — has gotten extra support from the federal government in the form of a $6 million School Improvement Grant.

These grants, launched by in 2009 by the Obama administration, are targeted at the lowest-performing high schools and meant to help reboot the school to improve academic outcomes. The interventions typically involve firing all the staff and hiring new.

Tilden was one of 13 schools awarded grants in the 2011-2012 school year. Initially, it was considered a “transformation” school and no staff was fired. But in the second year of the grant, the 2012-2013 school year, CPS decided to implement a “turnaround” at Tilden instead, firing the entire staff.

CPS officials say the school has gotten an additional $1.9 million each year of the grant and is expected to get the last installment this coming year. This is likely why the amount spent per student is higher than the district and state average.

But the amount Tilden is currently getting is certainly not three times what private school tuition costs. Though tuition rates vary, private high schools in Chicago charge anywhere from about $9,000 per year to $30,000 a year.

At the prestigious University of Chicago Laboratory Schools, where Mayor Rahm Emanuel sends his children, tuition for the upcoming school year is $28,290 for high school, $27,096 for middle school, and $25,296 for elementary school. It charges $17,832 for half-day preschool. These figures don’t include additional fees for books, gym clothes, after-school programs and other extracurricular programs.

What’s the spread in Illinois?

School spending across Illinois varies widely, with some districts spending more than $20,000 per student per year, while others spend $6,000. That’s because revenue for schools is mostly raised through local property taxes. Areas with tony homes and other high-value properties can generate lots of revenue. Areas with less valuable property are more limited.

To make up for disparities, the state sets a foundation. In 1997, it created a committee to help figure out what the foundation level should be — in other words, what it takes to adequately educate a student. Sylvia Puente, executive director of the Latino Policy Forum, is the chair of that committee, the Education Funding Advisory Board. 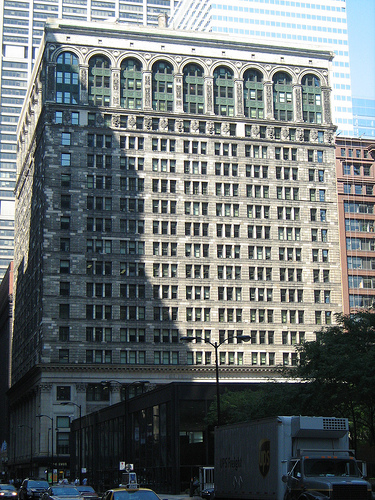 For the coming school year (2013-2014), EFAB recommended the state provide every district a minimum of $8,672 per student. Puente tells me the number is generated using a complicated formula that looks at low-spending, high-performing districts.

But in every year except one, the Illinois General Assembly set the foundation amount lower than what EFAB recommended. In the most recent state budget, foundation funding is $6,119.

However, most districts do not get the full $6,119. For example, Chicago is getting $5,720 per student from the state. The district then use local property taxes to generate more.

Private school funding is a different story. Parents pay tuition and schools are better able to make up for income disparities through charitable donations and alumni networks. But John Pantle, Finance and Advancement Consultant at the Archdiocese of Chicago, said Catholic schools do look at median family income in the surrounding areas when setting tuition rates.

“You need to meet the market,” said Pantle, the financial consultant at the Archdiocese of Chicago. “Any more than you would open a Cadillac dealership in an area that families couldn’t afford to buy a luxury car. Same thing with schools. St. Clements can charge a little more because it’s in the heart of Lincoln Park.”

But Pantle said in order to keep Catholic schools accessible to lower income families, the Archdiocese often steps in to cover the cost of education in areas where tuition is intentionally kept low. He said family discounts and individual scholarships are also provided.

“We try to balance it and it’s a constant struggle,” Pantle said.

How much money makes it to a school?

Once public school districts figure out how much they will get from state, federal and local sources, it all goes into one big pot and then district leaders decide how to distribute money to individual schools.

This year, the pot of money for Chicago Public Schools is about $5.6 billion to serve 405,519 students. Applying our commenter’s back-of-the-envelope calculation means CPS is spending roughly $13,789 per student.

But that crude calculation doesn’t tell the whole story.

According to budget documents, $3.4 billion of the $5.6 billion operating budget is going directly to schools and most of that goes to pay teacher salaries. There are some services that do directly affect schools, but are part of a separate departments that operate citywide, such as a traveling nurse or curriculum specialist.

If you divide that $3.4 billion by the 405,519 students enrolled in CPS schools, the per student amount drops to roughly $8,536 per student.

Typically, elementary schools get less because they cost less to operate, mostly because they need less staff per student. There are also federal grants earmarked for specific schools and high-needs populations that can increase or decrease how much a school gets. This is the case for Tilden and the School Improvement Grant.

After money makes it to the school

The amount a school gets from either parents or taxpayers varies widely from school to school, but what does the money get spent on?

“What you buy for education, like anything else, you buy quality,” Puente said.

On average, schools and districts spend about 80 percent of their budget on people. That includes salaries, benefits and retirement costs for teachers, clerks and administrators.

“No matter what, whether it’s $10,000 a student or $15,000 a student or less, the best use of those dollars is getting the very best people in the building,” said Mike Milkie, CEO and Superintendent of the high-performing Noble Street Charter School network that operates schools across Chicago.

Milkie said Noble spends about $11,500 per student at the network’s 14 high schools.  Charter schools are publicly-funded, but privately operated. Some of the money Milkie refers to comes from private sources and includes facility costs and other expenses not directly related to student instruction.

Charter schools have argued that getting less money per student has limited their ability to hire and keep great teachers. Charter school teachers are not part of the Chicago Teachers Union and typically make less money, according to the Illinois Network of Charter Schools, a group advocating for charters.

As with their public counterparts, private schools also spend the majority of their resources on personnel, says Pantle, the financial consultant at the Archdiocese of Chicago. However, average salaries at area Catholic schools run much lower than local public schools. Pantle pegged the average teacher salary at about $35,000 per year, not including benefits. The average teacher salary at CPS, according to the district, is $74,839.

To go back to the original question, $175,000 per child could essentially buy the equivalent of two separate teachers dedicated solely to each student and still have money left over for supplies or other operating costs.

Since we’re at it, there’s also “hidden money”

Dividing a school’s individual budget by the number of students enrolled is an accurate and fair way to estimate how much is spent per student, Odden, the UW-Madison researcher, said. But if we’re talking back-of-the-envelope math, we could use a slightly larger envelope and include funding sources that our questioner (and possibly most of us) aren’t aware of.

These are essentially the “offshore bank accounts” of public education. And as states and districts slash spending, they’ve become more and more prevalent.

Most of the “hidden money” can be found in more affluent areas of the city, where highly-educated, middle- and upper-income families fundraise to provide extra services like art, music and additional technology, such as iPads. The groups usually operate as 501(c)3 non-profit organizations and can fundraise large sums. 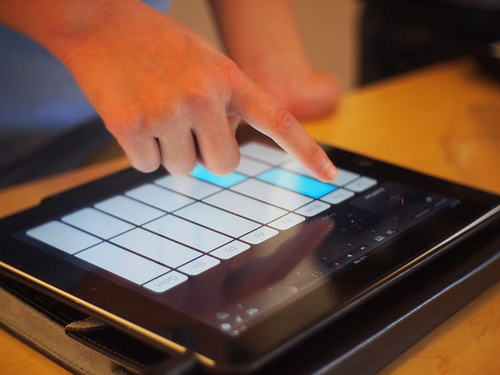 These funding streams are entirely separate from a school’s public budget, but, in light of recent cuts, they have filled in what some may consider basic services, such as a full-time physical education or world language teacher.

But parent fundraising groups are not the only “offshore accounts” in school budgets. There are all kinds of grants, donations and philanthropic efforts that provide valuable services, but don’t show up in a school’s budget.

At Lindblom Math and Science Academy in the West Englewood neighborhood, Principal Alan Mather tells me about the school’s partnership with Baxter International. The corporation provides biotechnology courses and professional development, as well as funding for a few positions.

“There is no funding stream that you see from that, but there’s a huge benefit to the student body because of that relationship,” Mather said.

Lindblom is one of the city’s ten selective enrollment high schools, which gets extra resources from the CPS Board of Education. Still, Mather says he is constantly seeking out local partnerships to fill gaps and provide disadvantaged students new opportunities.

Tilden is benefiting from a new partnership that also doesn’t show up in their budget, but is indirectly paid for by the federal government. In 2012, Columbia College received a $3 million dollar innovation grant from the U.S. Department of Education to implement a “Convergence Academy” inside Tilden and one other school. The money will come through Columbia — not CPS, not Tilden.

Back to the question

“Tim” (and later, “greg”) got us onto this tangent on school spending. The skinny is that within Chicago, schools get anywhere from $6,000 per student to $17,000 per student. State data indicate average spending is about $12,000 per student.

As for the area’s private high schools? Total costs there are not entirely clear, but tuition tops out at $30,000.

Again, it’s not up to Curious City to say any of these amounts are absurd, but “Tim” (whoever you are): No area school — public or private — spends $175,000 per student.