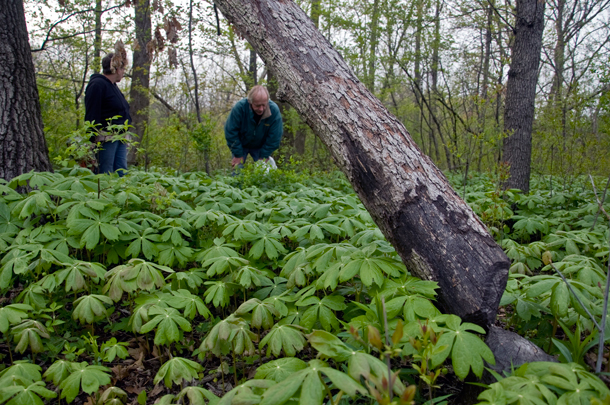 Each spring the "Garlic Mustard Challenge," which sounds more like competitive eating than conservation, enlists volunteers around the country for a blitz on an invasive plant that has edged out native species from Maine to Oregon.

In the relative hotbed of biodiversity that is the northern Illinois-Indiana border, however, it only takes a couple faithful stewards to keep the aromatic invader at bay.

Pulling the white-flowered weed up from the roots, Ruxton explains how the plants quickly colonize new territory.

“Every single one matters,” she said. “Because they each make thousands of seeds.”

Like most successful invaders, garlic mustard can weather many environmental conditions. It springs up sooner than other understory plants and grows quickly, gaining an edge for sunlight and space on the forest floor. 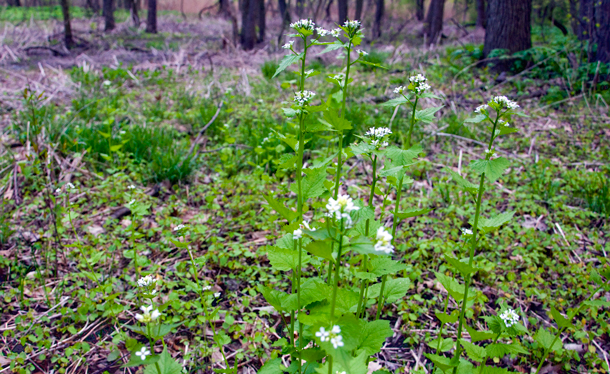 But they only flower every other year, which gives conservationists a window to cut back the population.

Where Pastirik, Ruxton and other volunteers have cleared the garlic mustard, native plants and wildflowers flourish. Solomon’s Seal, Jack in the Pulpit, and Wild Geranium dot an expanse of Mayapples spanning the forest floor between white, red and burr oaks.

Pastirik, 55, grew up and still lives in the East Side neighborhood where Eggers Grove sits. Pastirik said his five older brothers teased him for taking a census of the preserve’s tree species while he was a Cub Scout, but it hasn’t kept him out of the woods.

Eggers Grove is a series of lowland marshes and slightly raised ridges — remnants of Lake Michigan’s shorelines in its ancient iterations. Severe flooding in recent years has drowned many of the oaks lower along the sloping gradients between ridges. But the high ground is also risky.

Gnawed oak trunks and stumps reveal the recent arrival of beavers. Pastirik says it might be possible to lure them away by planting Aspens or other desirable species nearby, but trapping may be the only way to keep them from chewing through the keystone species of this former oak savanna.

Human use also takes it toll on the preserve. ATVs and dirt bikes, although they are forbidden, have dug tread marks into the trail. Invasive species like garlic mustard latch onto that upturned soil.

“The ruts act like furrows in a farm field,” Pastirik said.

Farther along the trail, where volunteers have not visited lately, the weeds grow almost waist-high. Hoisting an empty fertilizer bag full of uprooted garlic mustard, Ruxton signals to Pastirik where he should bring the crew next week.