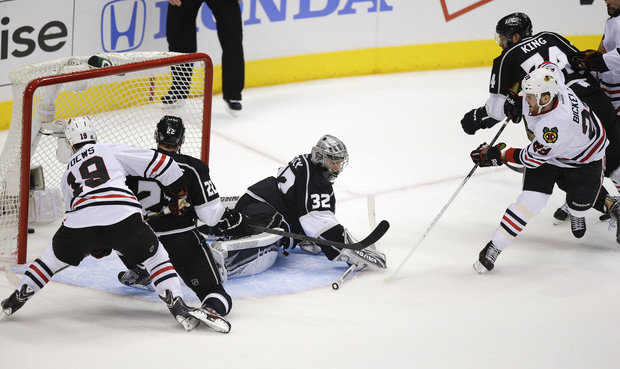 With the latest NHL Championship banner hanging over their heads in Los Angeles, the Blackhawks knew they would have a fight on hand in Game 3. The Kings controlled most of the action and skated to a 3-1 win at the Staples Center. Now the Hawks lead in the series has been cut two games to one.

Kings goalie Jonathan Quick rebounded well after being pulled in Game 2, but the Hawks didn’t challenge him as much as they did at the United Center.

It didn’t take Los Angeles long to get on the scoreboard in the first period. Justin Williams was able to bounce the puck off Corey Crawford and it went over the Blackhawks goalie’s left shoulder.

The Kings were able to take a 2-0 lead over the Hawks in the second period. LA defenseman Slava Voynov broke his stick on his shot and scored his fifth goal of the playoffs.

The penalty kill was strong again for the Hawks and they really needed it in the second period after Duncan Keith nailed Kings Center Jeff Carter in the mouth with his stick. Keith was assessed two minor penalties and his teammates successfully killed off the four minutes of power play. The Blackhawks killed off all five Kings power plays chances for the game. They are tops in the league for the playoffs killing 51 of 53 penalties. As usual, the Hawks were unable to cash in on their two power play chances for the game.

Nearing the end of the second period, the Hawks finally got on the scoreboard. After Jonathan Towes won the faceoff and Marian Hossa getting the attention of the Kings in the boards, Bryan Bickell grabbed the puck and scored an unassisted and uncontested goal. Bickell has scored twice in this Western Conference Final and has 7 goals for the playoffs. You wonder if Bickell hears a cha-ching sound effect every time he tallies a score with his impending free agency.

It is amazing to think the Blackhawks had only three shots on goal during the second period and one lead to a score.

The Blackhawks worked hard at the end of the game to try to tie it up and almost had an opportunity when LA made a strange line change. Duncan Keith was called off-sides which stopped the scoring chance. The Kings' Dwight King was able to score an empty netter when Crawford was pulled out of the net in the final minutes of the game. Defenseman Niklas Hjalmarsson; he was hit on his left knee blocking a shot in the third period. He did return to play, but it may be a concern going forward.

The loss stopped a five game winning streak for the Blackhawks. They will have a day to regroup and try to find a way to have more puck control in Thursday’s game. It is not surprising that the Kings were able to pull out the win. Their defense and goaltending is stabilized on the home ice.

The Kings remain perfect at the Staples Center this post season, winning all eight home games. The Hawks aim is to break that streak and steal back any momentum LA may glean after last night’s win.