Nerdy conventions are a big cottage industry. The biggest one, San Diego's ComicCon, draws around 130,000 people each year. Even Chicago's much smaller Wizard World attracts around 70,000 fans. So if you had to guess, how many people would you expect to attend the 70th gathering of Worldcon- one of the longest running science fiction conventions in the world? Don't forget to factor in Neil Gaiman, George R.R. Martin and Community creator Dan Harmon being there.

Nowhere close. Just under 5,000 attendees would be correct.

The event happened over Labor Day weekend, dubbed Chicon 7 since it was the seventh time Chicago has hosted the venerable convention. And despite being 1/26th the size of the much younger ComicCon, Worldcon wouldn't have it any other way.

Though it wasn't the first science fiction convention, Worldcon began in 1939 at the New York World's Fair, just two years after a group of fans got together in Philidelphia and claimed that honor. From the beginning Worldcon was designed to happen in a different city each year, run by entirely by volunteers. As Chicon 7 organizer Steven Silver explained to me, the focus of Worldcon is meeting people and making connections. That stands in stark contrast to the massive "Cons" that sprang up in the 1970s where movie stars and television previews are the main attractions.

My colleague Peter Sagal turns out to be a Worldcon fan. He is famously nerdy, so it's not surprising. He attended Noreascon Two in 1980 and wonders to me why his teenage self would only attend one day of the convention. This year he interviewed Game of Thrones author George R.R. Martin at Worldcon, but Sagal says he was really just there as a fan of Martin's. He was invited by Maureen Ryan to join her in interviewing Martin on the spot. He points out the main distinction of Worldcon is that it is focused on science fiction literature, so authors are the main attraction- not actors staring in movie adaptations of science fiction books. 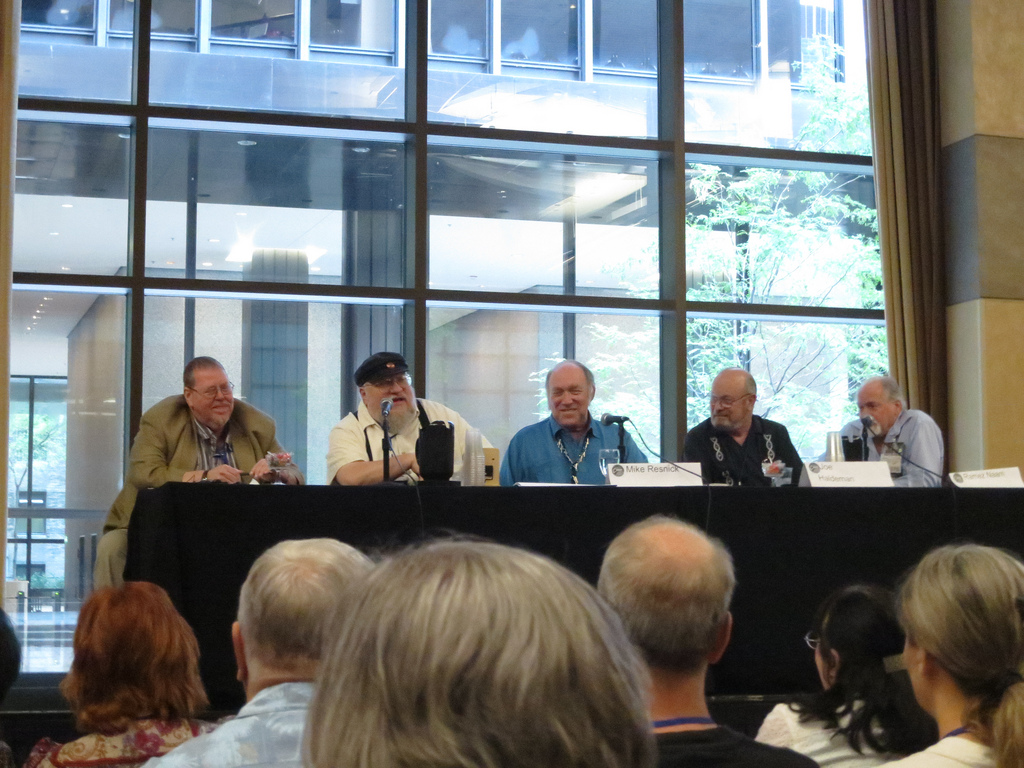 George R.R. Martin himself is a huge fan of Worldcon, claiming to have attended almost every gathering since 1971. This year the HBO version of his Game of Thrones books won a Hugo Award- the honors bestowed each year by Worldcon members. It's telling that the Hugos only have three categories that include moving pictures and sound (Best Dramatic Presentation, Long and Short Form and Best Fancast). Of those three categories, two went to noted authors this year (Martin's Game of Thrones and a Doctor Who episode written by Neil Gaiman). Martin himself is a Worldcon member, in fact, everyone at the convention is- no celebrities are paid to be there, according to Steven Silver.

That's in stark contrast to bigger conventions where much of the attraction is the opportunity for ticket-buyers to pay for autographs from stars. In fact, Worldcon doesn't even sell tickets. To attend, you must purchase a membership, which also allows you to vote on the Hugo Awards. Silver says that seeing friends is what the event is all about, the point is that everyone is there as a fan.

So why did upstart conventions like ComiCon and Wizard World surpass Worldcon in size? Steven Silver chalks it up to two factors- the nomadic nature of the event and the tight knit community. Worldcon is in a different city each year and it's only planned two years in advance. In the past ten years Worldcon has been held in Canada, Australia, Japan and Scotland. Those aren't quite as easy to get to as San Diego. Also, the community emphasis of Worldcon means the organization is always ad hoc, as Silver describes it. With no full-time staff, there is little possibility of major advertising deals or publicity campaigns.

Even though I missed Chicon 7, I'm fascinated by the phenomenon of Worldcon. In a time when nerds are trendy, Worldcon is a great way to separate the poseurs from the truly geeky. The next time a sexy movie star claims to be a giant nerd, the next question should be, "Have you ever gone to Worldcon?" If they've never heard of it, you'll know how deep their passion runs.

Get your feet wet with the true geeks at their next local gathering- WindyCon 39 is November 9-11 in Lombard.