“He never buys anything new,” said his wife and business partner Joyce Durante.

Staniszewski is a marine mechanic who has lived in East Garfield Park since 2004. He’s picked up trash and mowed knee-high grass in the struggling neighborhood since the couple moved there.

Then his wife heard of a city land redistribution program coming to the area. They could own the lots he was already cleaning. 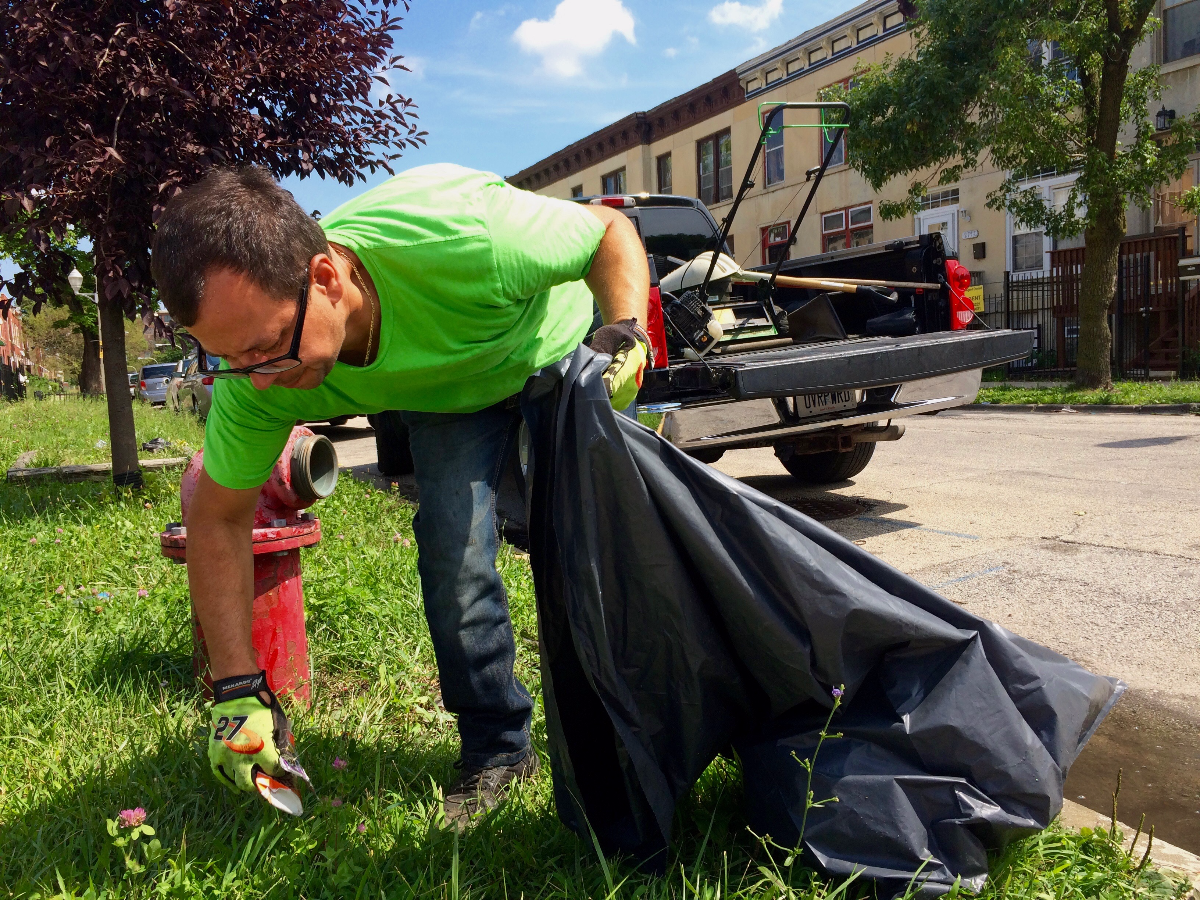 The Large Lots program sells the city’s inexpensive, underutilized lots to nearby property owners. Someone who owns a parcel of land on a Large Lot’s block can apply for up to two nearby lots. Staniszewski and Durante are landlords who own six pieces of land in East Garfield Park.

About 500 Large Lots have been sold since 2014. In a similar Detroit program, more than 5,000 vacant lots have been sold to next-door residents since late 2014 in an ongoing program, said Craig Fahle, Detroit Land Bank Association’s director of public affairs.

In Chicago, the city’s program has offered land in stages in East Garfield Park, Austin, Roseland, Pullman, and, most recently, Auburn Gresham. More lots may be offered in the fall, Peter Strazzabosco, the city’s Deputy Planning and Development Commissioner, said in an email.

“The goal of the program is to sell as many lots as possible to eligible buyers in order to return property to the tax rolls, increase home values, and create local income by enabling their sale after five years,” Strazzabosco said.

The city commissioner didn’t respond to whether Large Lots was coming back to East Garfield Park.

Do buyers like Staniszewski violate the spirit of the program?

Staniszewski isn’t unique. In fact, 17 percent of owners have three or more properties, according to city data. 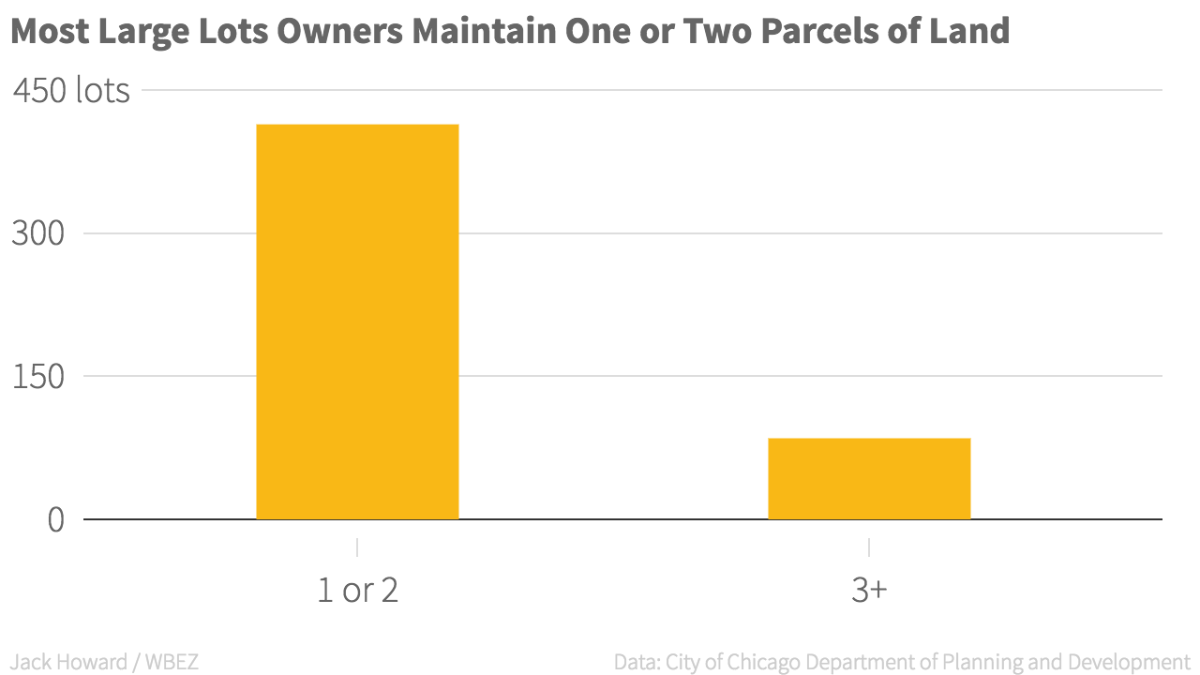 “I didn't expect to walk away with eight lots,” Staniszewski said. “I just was more diligent and did my homework. Where other people just filled stuff out. I figured there would be way more involvement.”

One of Staniszewski neighbors, John Perryman, said the program’s design is to blame for a lack of involvement. He has written suggestions with the Garfield Park Community Council to include long-time renters in the program, instead of many multiple property owners and corporations.

“I thought the whole point of the program was to strengthen people who live here,” said Perryman, an East Garfield Park Large Lots owner. “And bring wealth to people that live here.”

How should the program work?

Perryman said the program applicants should have to live – not just own property – near their Large Lots. In fact, he owns one lot across the street from his house.

“We call this the ‘Monroe Commons.' We keep it mowed and kids play in it,” Perryman said. “People sit on their stoops and they watch their kids play. It's nice.” 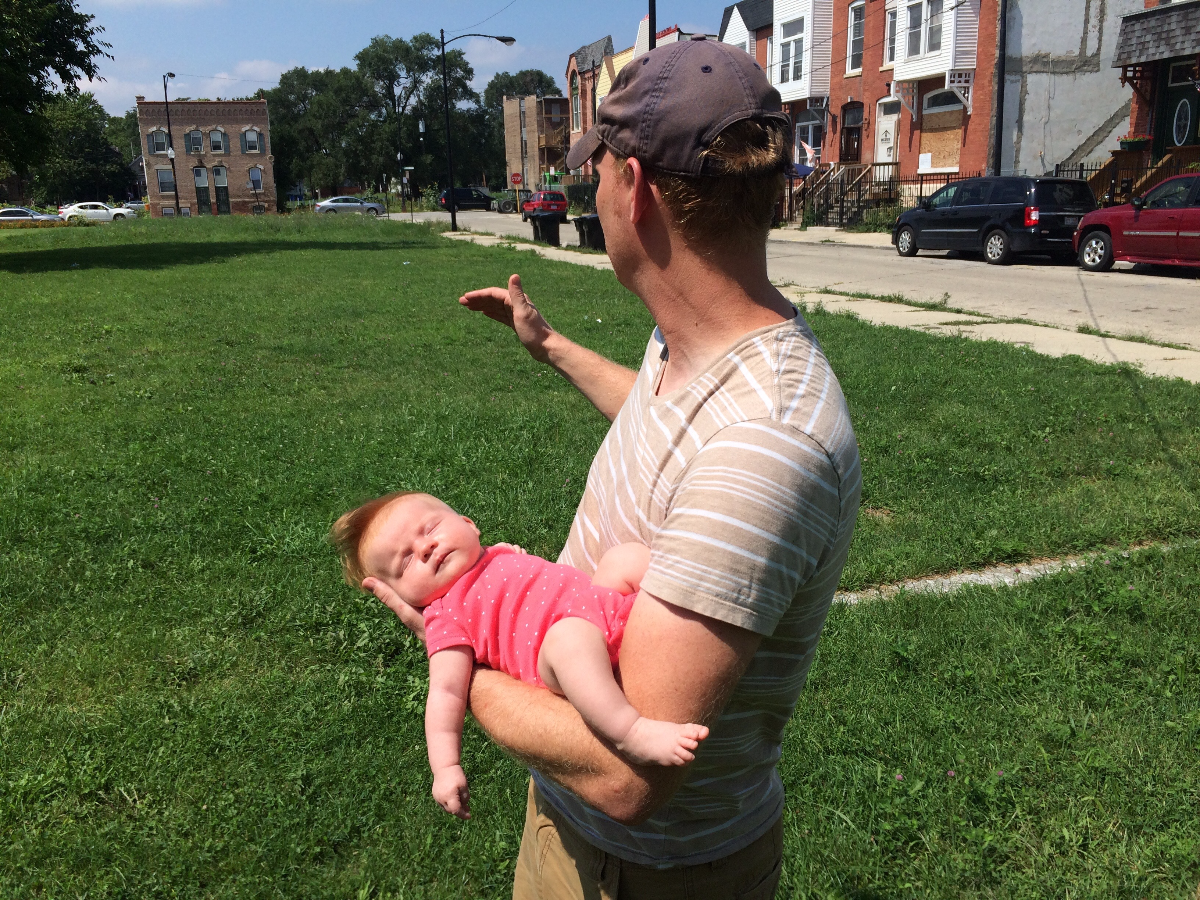 Tony Taylor, a 40-year renter in East Garfield Park, said he feels excluded from the program.

“People who’ve been here that long should have the opportunity to buy first. The person that just comes along and knows it, he gets it,” Taylor said.“That’s kind of like how people buy you out of your own neighborhood too though.”

Why wouldn’t Perryman’s idea of the program work?

But Staniszewski’s experience as a landlord makes him skeptical of including renters.

“Some people are just renters. They don’t want to own," he said. "They want to be able to call up their landlord and say, ‘This is broke, come fix it.’ ”

Staniszewski said renters may walk away and stop taking care of their Large Lots when their lease runs out.

City commissioner Strazzabosco said the program is intended for property owners who care about their community.

“The program is for property owners, not renters,” he said. “The ownership criteria helps ensure that existing community stakeholders directly participate in the benefits and responsibilities involving the program.”

How valuable are these lots really?

Staniszewski said his long-term plan is to sell at least one of the lots to make his investment worthwhile.

“As the neighborhood gets better and development happens, the lots are worth more money. And then you can either build on them, or sell them – and that’s what we’re doing,” he said. “We’re landbanking.”

Geoff Smith, executive director of the DePaul Institute for Housing Studies, said investment in East Garfield Park may be smart. 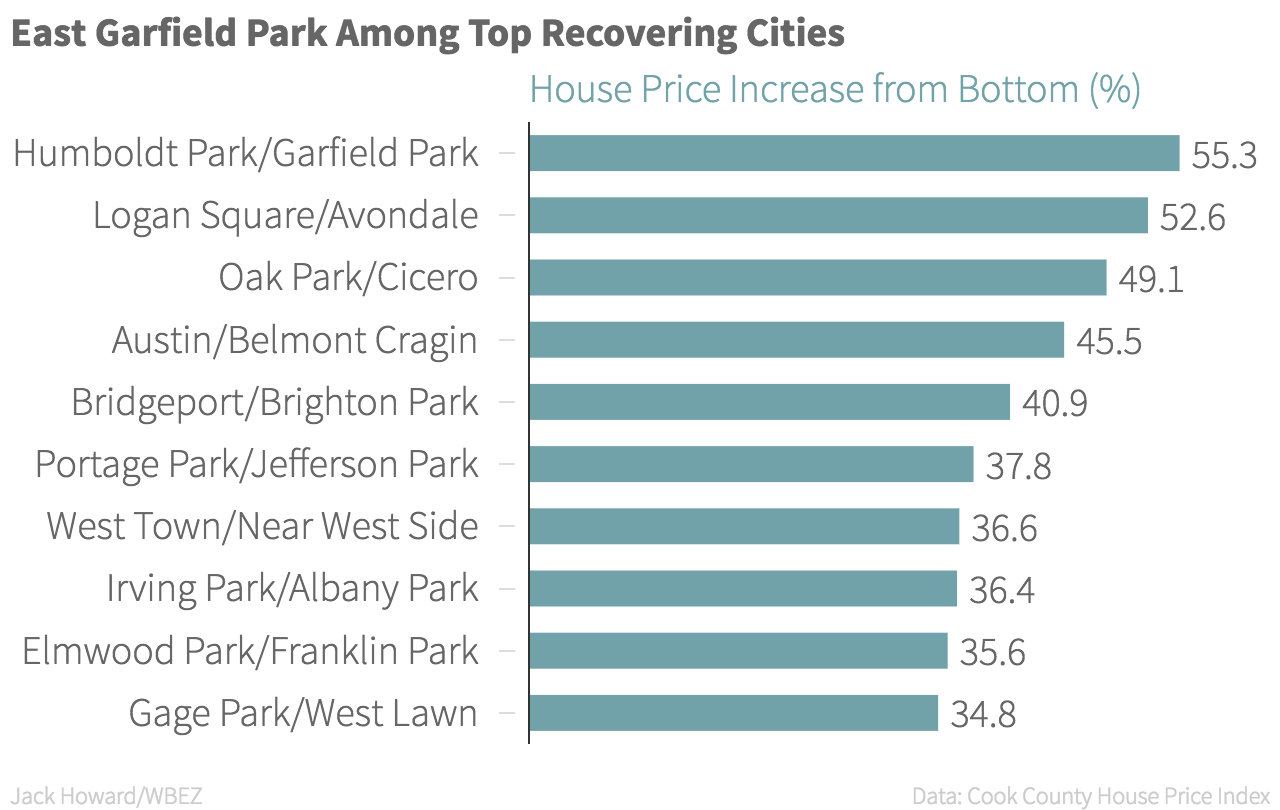 “You see some recovery in that neighborhood,” said Smith. “For lots of reasons, there’s still interest in East Garfield Park as a place for future investment.”

What will it take for the lots to be worthwhile for Staniszewski?

Staniszewski paid $57 for each vacant lot in 2015, including various Cook County recording costs. And the landlord said similar lots have cost him around $400 to $650 in property taxes per year. He also contributes six hours of weekly labor.

He hopes one lot’s sale for $30,000 will recoup the costs of around $25,000 in five years of property taxes and $456 in Large Lot sale costs. He will also spend around 1,500 hours maintaining the eight lots over five years.

But Staniszewski said the labor costs are difficult to estimate. He also maintains a Large Lot next to the house where the couple lives.

“The lot that we have next door is all a labor of love. You know, that’s for us,” he said. 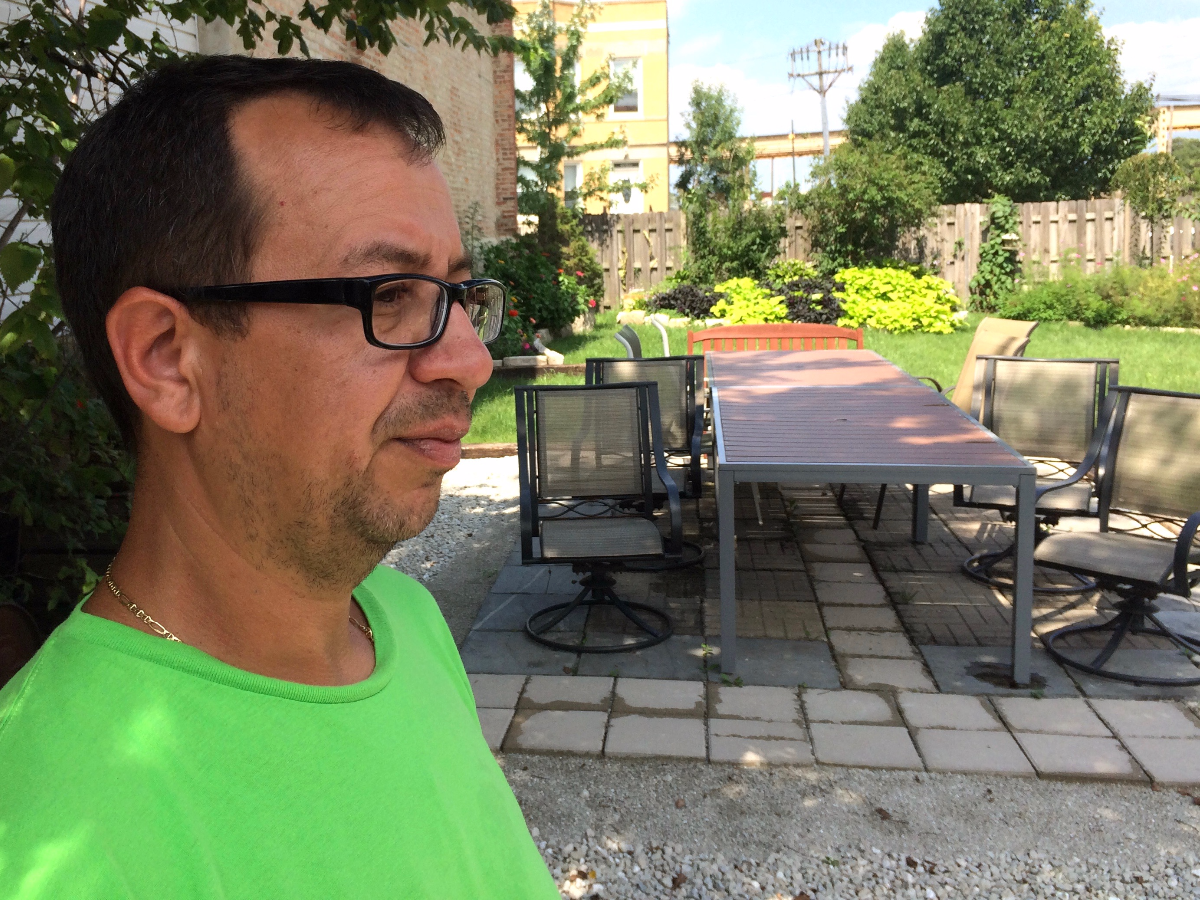 And maintaining the other lots began in a similar way. He cited one lot on the corner. It was a community garden that fell into disrepair, with tall weeds and trash. Staniszewski said he purchased it for financial and psychological benefit.

“Every time we turned the corner, it was filled with garbage – trash and bottles. We got tired of it and started maintaining it,” he said. 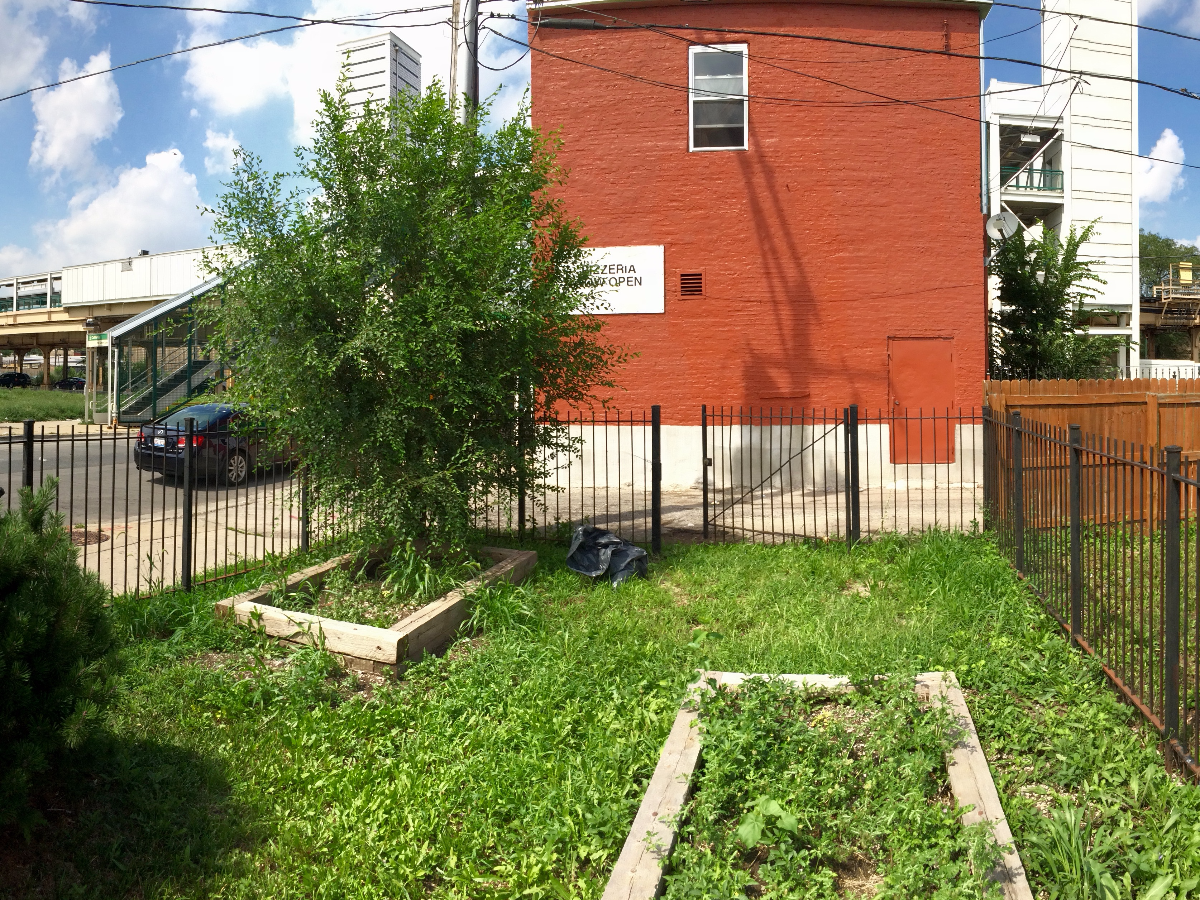 “You know it came up on the dollar lot program. So we’re like, ‘Well, we’re maintaining it already. Might as well own it.’ And we think it might be worth something some day.”

Jack Howard is on WBEZ's digital team. Follow him @JackHowa.