Lawrence Wright is an author, screenwriter, playwright, and a staff writer for The New Yorker magazine. He won the Pulitzer Prize for his 2006 book The Looming Tower: Al-Qaeda and the Road to 9/11. Most recently, filmmaker Alex Gibney directed an HBO documentary based on Wright’s reporting in Going Clear: Scientology, Hollywood, and the Prison of Unbelief.

Much of Wright’s work is about how religious belief animates personal action and political conflict. He has documented the Jonestown massacre, explored allegations of Satan worship, profiled brimstone-tinged gospel preachers, and, of course, tracked the histories of al-Qaeda and the Church of Scientology.

Regarding the latter, he isn’t necessarily sympathetic to the Church’s claims, but he understands its appeal. “People don’t go into it because it’s a cult, they go into it because they’re looking for something,” says Wright. “It’s like going into therapy; people do benefit from it.” 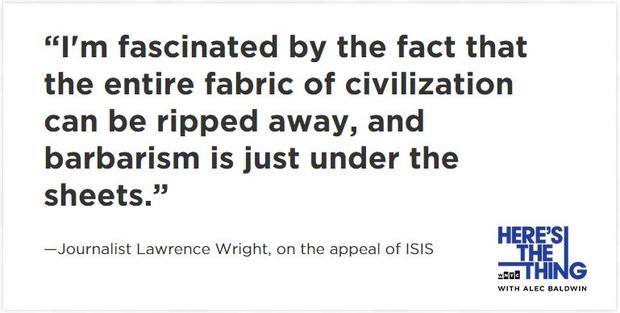