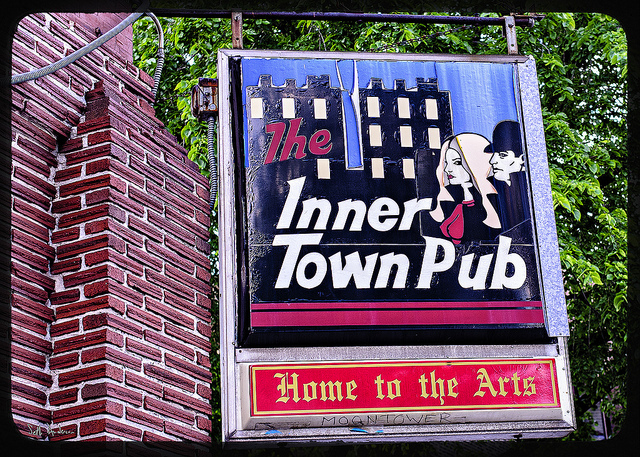 What makes for a great neighborhood bar? To me, its main quality exists in comfort.

Are the drinks priced well? Are the seats comfortable? Are the people more than decent? A great neighborhood bar — a great dive bar in particular — is especially enjoyable on weekdays, when raucousness is abandoned for quiet and a night cap. Expressions like 'pleasant,' 'decent' and 'just right' should be used liberally.

In college, I lived in Chicago's Lincoln Park. I remember going to a bar a block away from me once, hoping to find an alternative to treking to other parts of the city for a night out. I handed the doorman my ID, but what should have been a quick once-over became uncomfortable. His stare was equal parts lascivious and questioning, as if saying, ‘You don’t belong here, but I’ll let you in if you’re a good girl and ask nicely.’

I never went back.

“All we’ve got in Chicago is a bunch of TV screens and dive bars,” I once said to a friend while leaving the Belmont 'El' stop. “And I hate it.”

After a life spent growing up in and around the city, I was itching for some place different, some city that didn’t feel as familiar as Chicago. (But I kept that to myself.)

I thought my friend would agree with me, but he said, “You know what? I actually like them. Well, the dive bars at least.”

I had no idea know what he meant —yet.

Later, I moved to Ukrainian Village. (More specifically, I moved to East Village, but trying to explain where that is, even to life-long Chicagoans, can be difficult.) I chose the area because I didn’t want to live on the North Side, but didn't want to live as far west as where I'd grown up either.

It was here that my perspective on Chicago bars changed. On a rainy day during a friend’s May birthday, we went to her favorite local bar, Innertown Pub.

The place was packed, the lights were charming, and the walls seemed to tell their stories. Located on a quiet East Village street, this was the kind of bar I was unfamiliar with, but immediately knew I could love.

In college, I never felt at ease at downtown clubs, sports pubs, or dive bars. Instead I spent most of those years frequenting places that catered to the North Side hip-hop crowd. We listened to classic and modern hits, with a sprinkle of 90's R&B for good measure.

There, I felt a kinship both to the people and the setting. There was no pressure to look sexy or cool. I did not think about whether my hair was pressed right or if my jacket was new enough. This was Saturday night, but it felt as real as a Tuesday.

I looked for spaces that had something unique about them, but their characteristics were often the same — decor, beer list, music.

Innertown felt different, and that's what made calling East Village home easy. Soon, I discovered other places I jived with: the dance vibes of Club Foot, the beautiful decor and excellent drinks of Bar Deville, the everyone-you’ve-ever-known atmosphere of Rainbo, the ease of Happy Village, the curiousness of Nilda’s.

I've lived in this neighborhood for more than two years now, and being here has shown me a part of the city I never would have given a chance, had it not been for places like these.

Perhaps this is just a phase, and in two years I’ll be singing another tune. But for now, it feels just right.

Britt Julious writes about race and culture in and outside of Chicago. Follow Britt’s essays for WBEZ's Tumblr and on Twitter @britticisms.