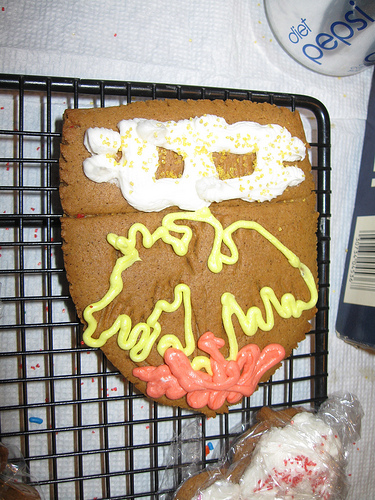 Those cool kids at University of Chicago take part in an epic scavenger hunt each year, so legendary that Patricia Marx immortalized it in the New Yorker last year. This year's hunt ended Sunday. Here were my favorite items from the full list:

2. Jump the shark. Literally. Points based on length and vivacity of shark. [Up to 40 points]

24. Every girl needs a cocktail dress! Yours should hold at least a liter of Mai Tais. Keep it classy, though—we expect neither VPL nor VLP (visible liquid placement). [33.814 points]

27. It’s not about the money; we just find zeroes deeply and inexplicably appealing. Bring us the highest denomination banknote you can find in whatever currency you want. [4 points per zero in excess of three]

29. A team member who was born in a country that no longer exists, with documentation. [10 points]

33. The Library of Congress classification system has been criticized time and time again for not being sufficiently onomatopoeic. Prove the haters wrong: find a book from one of the University of Chicago libraries whose call number, including at least one digit, abstractly reflects its content. [9 points]

100. Accompany a campus tour group! Every time the tour guide talks, play the saddest backing song you
can on a single violin. [7 points]

104. Has this ever happened to you? No. But it could. Create a one-minute montage of ten plausible informercial-calibre disasters. [6 points]

206. During the Hunt, get a member of your team into one of the costumed, on-field competitions held between innings at a professional baseball game. [20 points for minor league. 20 more points for MLB]

261. Very few people know that May 10th is Bring Your Mariachi Band to Work Day. We have a feeling that this year, a lot of people are going to find out. [10 points]

267. The TacoCopterTM: The remote-controlled helicopter that can deliver a taco wherever you want it, whenever you want it. Which, incidentally, would be to one of your professors during a class on Friday. [15 points]

297. Any government form inquiring about the facial hair style of the person (male and female) filling it out. [4 points]

298. An edible cookbook. Must contain at least three recipes, each printed on a page that tastes like the recipe’s product. Cookbooks should include mouthwatering illustrations. [24 points]

309. Keep spirits high at Scav Olympics by transforming one of your team members into Cleatus the FOX Sports Robot. Like Cleatus, your Sports Robot should know a variety of football-esque dances, play a mean air guitar, and always follow the First Law of Sports Robotics: A Sports Robot may not bum out a human being or, through inaction, allow a human being not to be pumped. [11 points]