When I was young, I went to a Catholic grade school. And like all good Catholic kids in the 1950s, I gave up something for Lent — usually ice cream.

Then Easter would finally come. Lent was over. To celebrate, my parents would take me to The Buffalo. 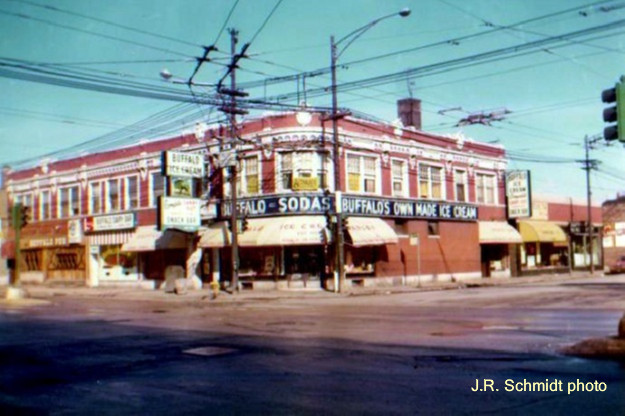 The Buffalo Ice Cream Parlor was located at 4000 West Irving Park Road (or 4000 North Pulaski Road — the address happened to work out that way). The place had leaded glass windows, dark walnut booths, a marble soda counter and murals with dancing cherubs. It smelled of sweet chocolate. As background noise, there was the comforting whirr of 20 malted milk mixers.

The awning over the main entrance said “Established 1902.” Actually, the 1902 date was when The Buffalo was founded at its original location, Division and Sedgwick. The business had moved to Irving Park in 1918.

After six weeks of ice cream withdrawal, a frozen turnip might have satisfied my ten-year-old palate. But I knew that The Buffalo’s home-made product was something special, since my dad and I would sometimes stop in for a quick one before going to the Commodore Theater across the street. I loved The Buffalo, and so did most of the Northwest Side. 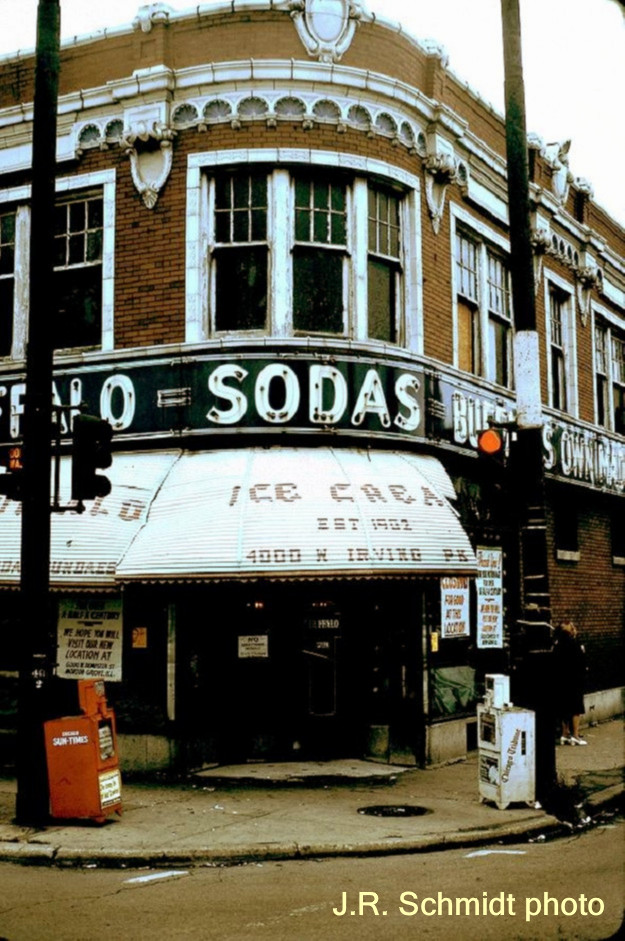 Then, in the spring of 1973, the papers reported that The Buffalo was going to close. The land had been sold and a Shell gas station would replace the ice cream parlor.

The Buffalo’s fans would not accept that death sentence. They made signs and picketed. They sent letters to the editor. When the city council held a hearing about rezoning for the gas station, 300 protesters showed up. Mike Royko wrote a column about the dastardly turn of events.
Three days before the April 30th closing date, the local alderman announced a reprieve: The Buffalo had been granted a temporary six-month lease.
That was just long enough. By the fall the first Arab oil embargo was in effect. Who needed another gas station? The Buffalo got a new five-year lease.
Five years later, when that lease ended, The Buffalo closed for good, and the building was torn down. Ultimately a Shell gas station did go up on the site.
There was some controversy over what had happened. One rumor said that The Buffalo’s owner was happy to move out, but didn’t want to rile the public. A new ice cream parlor calling itself The Buffalo operated for a while in Morton Grove. I went there once, but it wasn’t the same.
The Shell station is still in business at Irving Park and Pulaski. I’ve even bought gas there from time to time. Though life isn’t always fair, we move on.