Mission Of African-American Museum Writ Large In Its Very Design

The building rises — bronze and “brooding,” in the words of architect David Adjaye — floating in a sea of white marble and limestone on the sprawling National Mall in Washington, D.C.

The mission of the National Museum of African American History and Culture — set to open to the public next week after a 100-year journey into existence — is to tell the story of America through the lens of black history and culture.

That mission is reflected in the exhibits and encapsulated in a Langston Hughes quote featured inside the museum: “I, too, am America.”

It’s also reflected in the location and design of the building itself.

The 400,000-square-foot museum fills the last open spot along the National Mall, the magisterial public walk envisioned by Pierre Charles L’Enfant in 1791 as a place for all Americans, a landscape celebrating the country’s democracy.

Sitting adjacent to the Washington Monument, the museum is on an axis with nearly every important memorial and museum in the city. And that location — which Adjaye, the British-Ghanaian lead designer of the project, refers to as a crossroads or “joint” of D.C.’s “monumental landscape” — helped inform the design.

“We’re at the knuckle between one world, which is the Washington Memorial grounds, and the Mall proper, which is very manicured — double alley trees, landscapes, palaces of culture,” Adjaye explains during a tour of the nearly completed museum last week. “This is a building that can’t be that or that, but has to be somewhere between the two … has to be something that also has its own completely significant identity.” 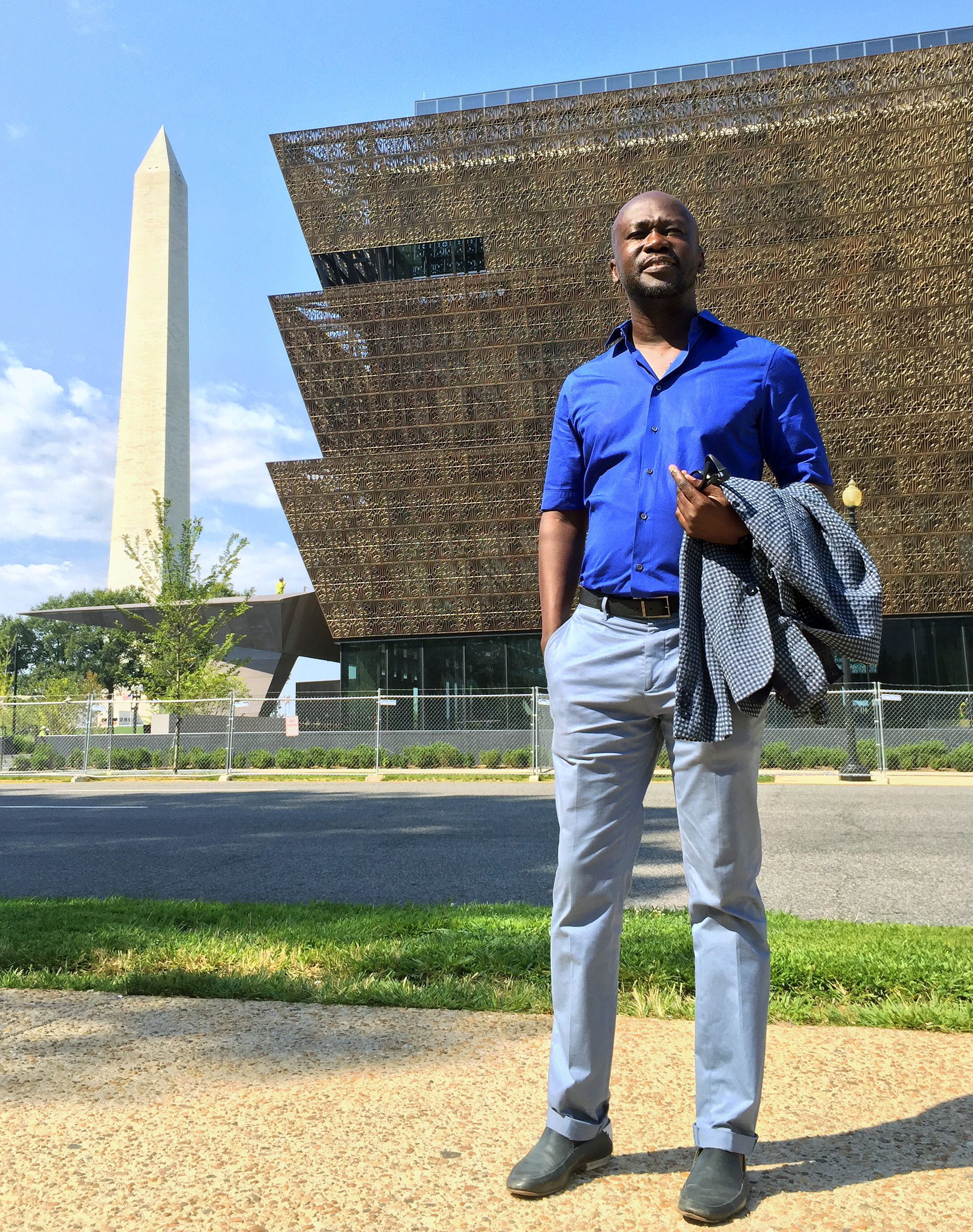 Architect David Adjaye is the lead designer of the project. The Freelon Adjaye Bond/SmithGroup won the competition to design the museum in 2003. Lara Hartzenbusch/NPR

In 2003, the Freelon Adjaye Bond/SmithGroup won the competition to design the museum, and Adjaye’s goal has not been to make a “temple to fill with goods,” but to create something where “the very nature of the building also is part of the narrative form.”

The decision to eschew the light-colored materials of the other “palaces of culture” on the Mall is one element of this narrative — and it also matched the philosophy of Lonnie Bunch III, the museum’s founding director. 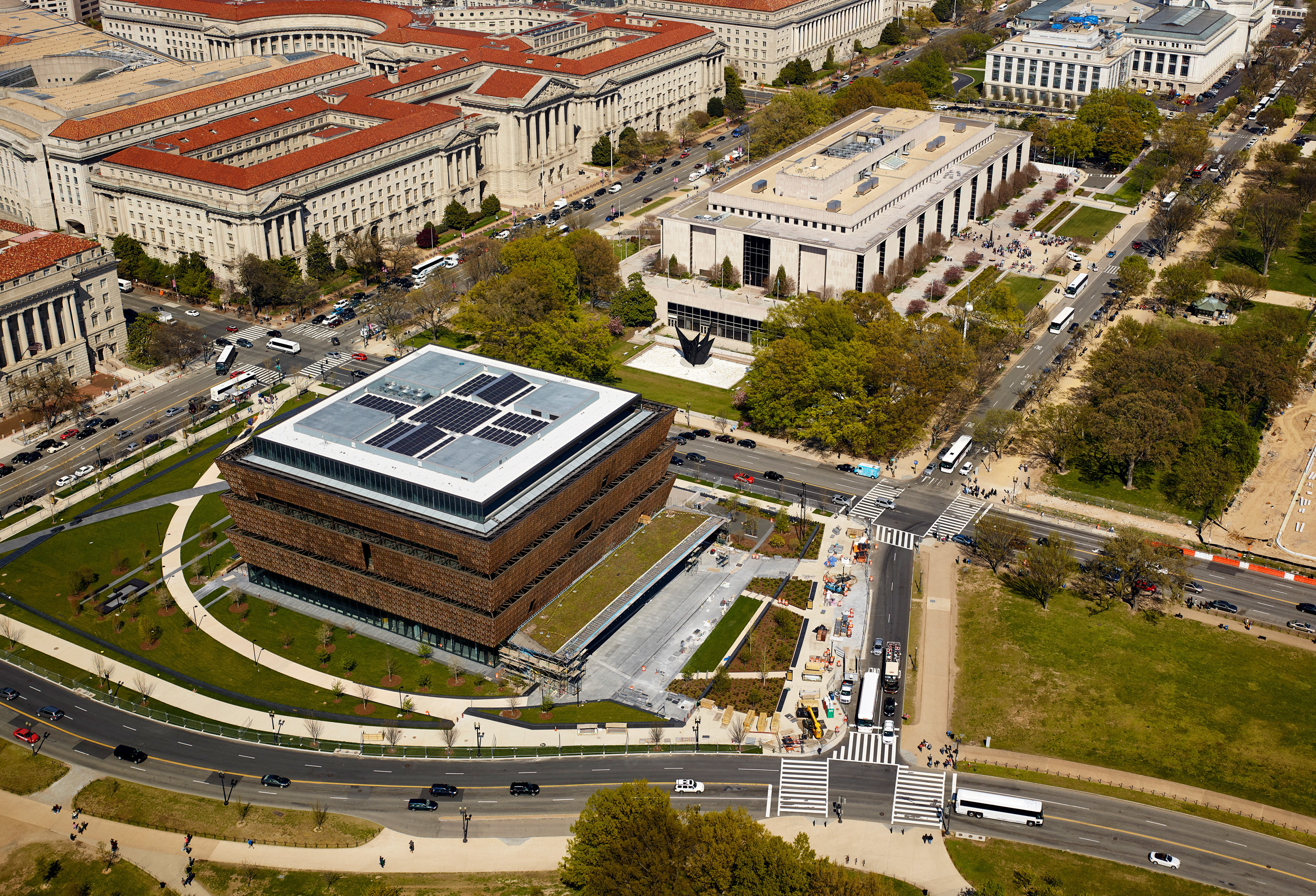 The National Museum of African American History and Culture stands in the last open spot along the National Mall. Alan Karchmer for NMAAHC

“He really embraced and really loved this idea of a dark presence on the Mall,” Adjaye recalled. “In a way, the museum for him is about the way in which the African-American community is absolutely integral to understanding the American identity but somehow has been always in the back room. So this is a kind of coming to the front, sitting on the front lawn, with all the other monuments.”

The museum doesn’t try to hide or blend into the classical forms and perpendicular lines that surround it. It wears with pride an exterior that celebrates both Africa and America.

Take its striking silhouette — a triple inverted pyramid form, each tier angled up and out. The shape mimics that of the crowns atop the figures of the caryatids, or carved pillars, of the Yoruba, an African people with origins in Benin and Nigeria. It’s an easily recognizable form from African art — akin to a Corinthian column in Western art — that denotes “very sacred, special and commemorative spaces.” 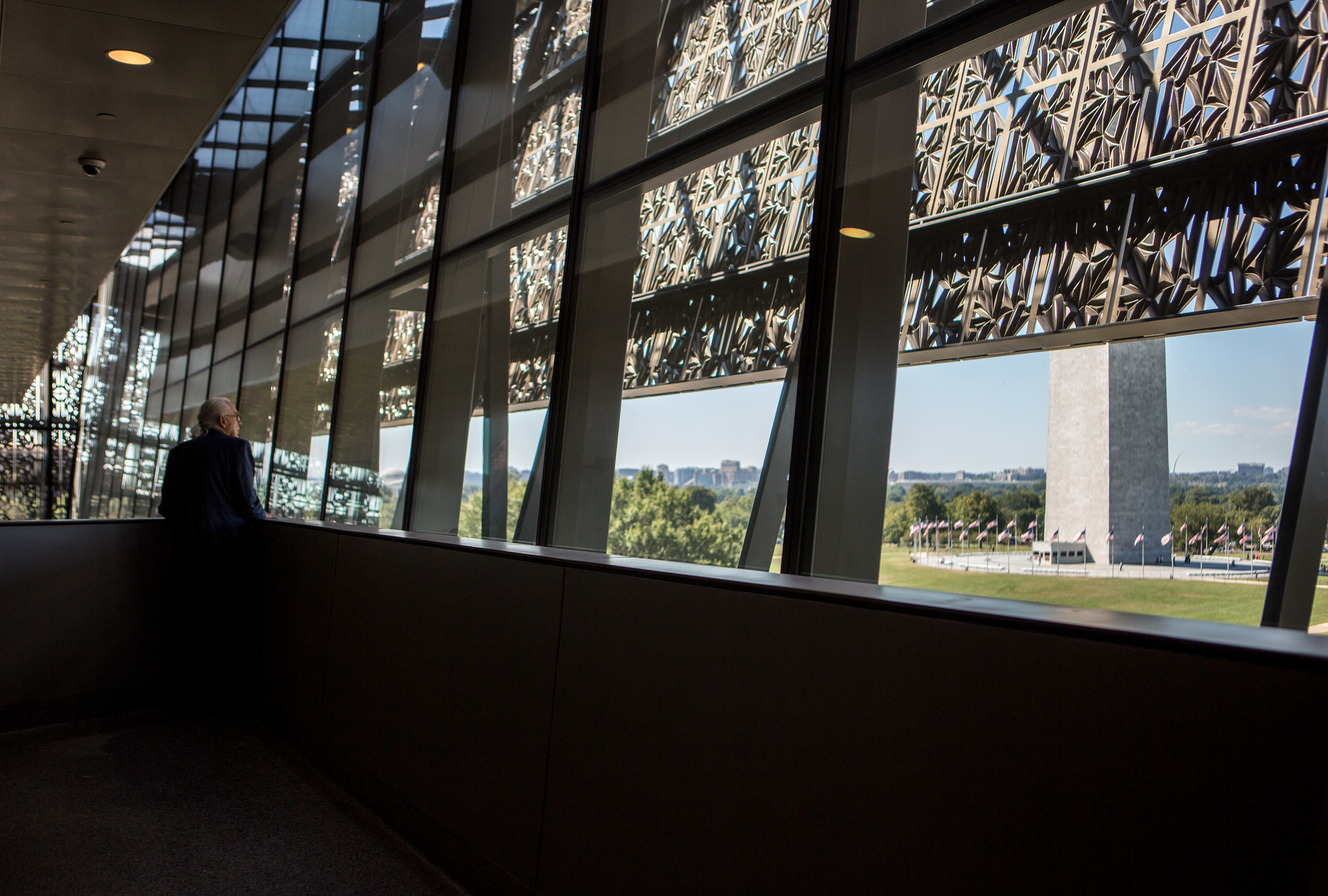 A visitor takes in a view of the National Mall through the panorama window at the NMAAHC. Ariel Zambelich/NPR

“It is really a way of trying to speak to the narrative of where the African-American community originates from,” Adjaye says.

But look carefully and you’ll notice that the shape of the building whispers acknowledgment to the monumental, heritage landscape that it’s part of: The angle of the triple tiers is in perfect alignment with the pyramid atop the neighboring Washington Monument.

While the museum’s silhouette is inspired by African art, the building’s “skin” — the 3,600 panels of shimmering, bronze filigree that sheath the glass building — is rooted in the traditions of the South, and the intricate ironwork forged by the African-American craftsmen of New Orleans and Charleston.

As the sun shines through it, a lattice-work of light settles on the museum floor and changes throughout the day. Adjaye wanted to evoke the feeling of hot summer, with “sunlight dappling through the trees.” 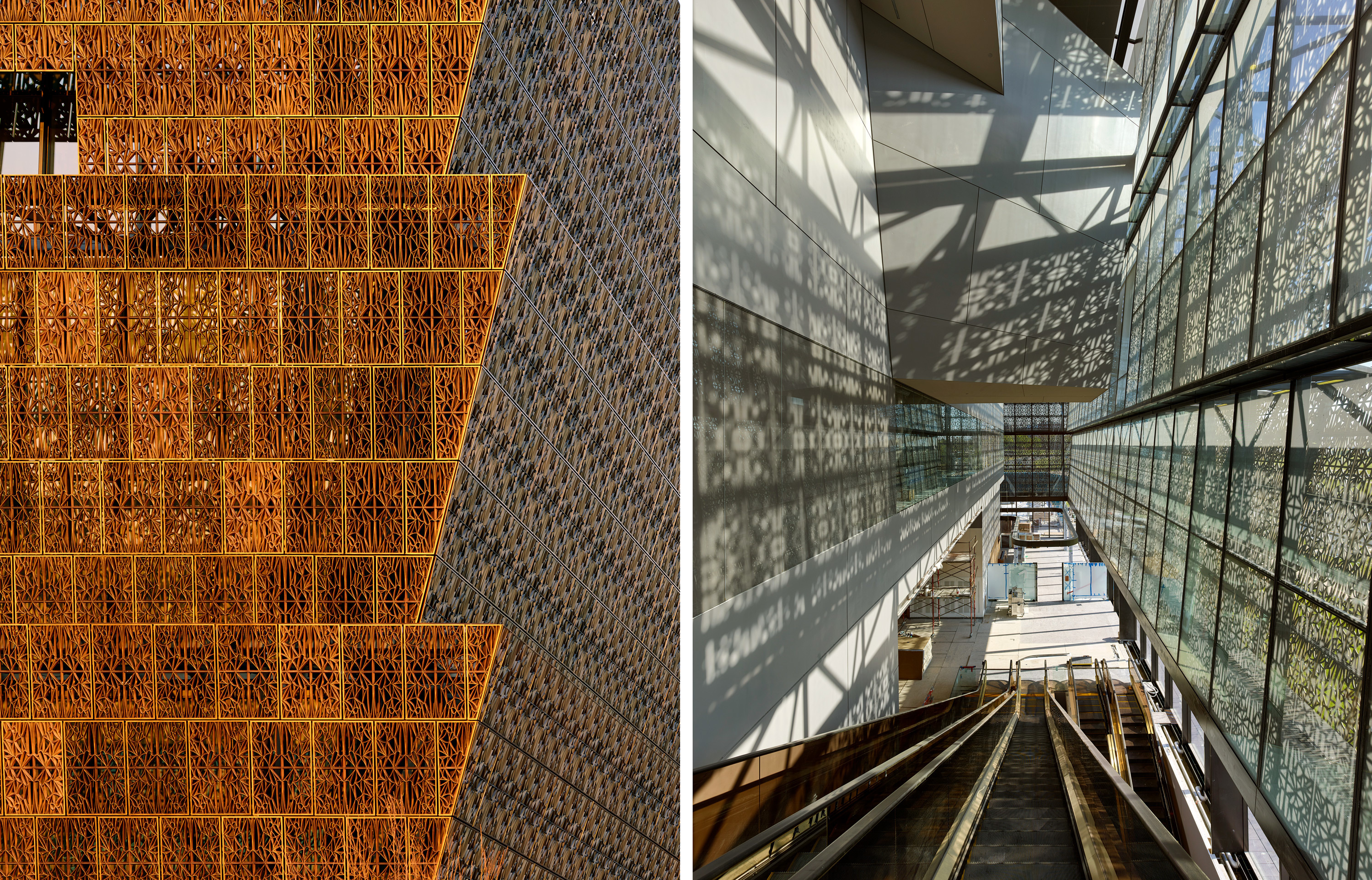 Detail of the museum’s latticework and light through the 3,600 panels of shimmering, bronze filigree that sheath the glass building. Alan Karchmer for NMAAHC

“In a way, the building is almost analogous to a giant tree with an incredible shade,” he says. “I wanted it to be a museum where when you come in, you weren’t suddenly in an interior that was about focusing on marble and stone and classical forms … but to come in and to have light be your guide.”

From darkness to light

The interplay of light and dark is key to the museum’s design. Inside the building, for instance, there’s a stark contrast between the warm, dappled sunlight of the four galleries above ground and the rest of the museum — half of which lies underground, including most of the exhibition space. 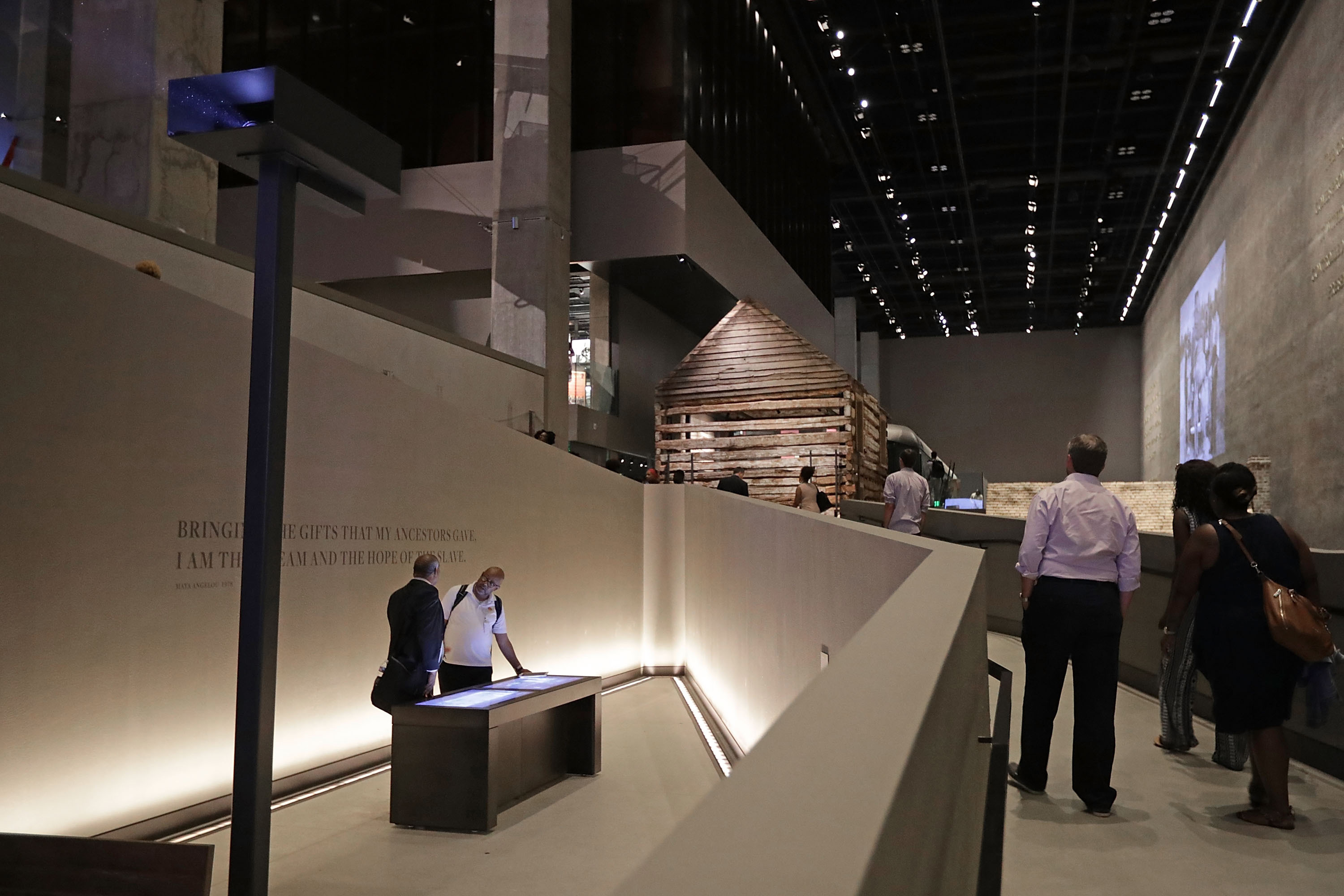 Long ramps guide visitors through the exhibits in the lower levels of the Smithsonian’s National Museum of African American History and Culture. Chip Somodevilla/Getty Images

The best way to view the museum — the way it was intended to be experienced, says Adjaye — is to start at the bottom, some 70 feet underground, in the history galleries.

The three-leveled space is cavernous — Adjaye calls it a crypt or vault — and visitors ascend via gently sloping ramps. The exhibits are arranged to reflect that journey upward: starting from Africa and the darkness of the Middle Passage and slavery to the present day, literally rising through the decades of history.

“That’s the symbolism of the triple tier,” Adjaye explains. “There are the lower basement galleries and then the upper two basement galleries. But also the narrative of the agrarian beginnings, the migration to the cities, and the integration into the society is the triptych of the story.”

The “compression of history” — represented by a slave cabin from a 19th-century plantation in Edisto Island, S.C., through two centuries to artifacts and images from President Obama’s inauguration — is an artwork itself, Adjaye says.

“This was critical, that you really were seeing, in this gallery, the arc of the contribution and the struggle and the difficulty and the triumph of the African-American community,” he says.

As visitors move up through the museum, emerging from the darkness and into the lightness of the above-ground galleries, the subject matter turns lighter and more joyous, too: topics such as African-American communities, food, art, literature, music and contributions to business, science, sports and the military. 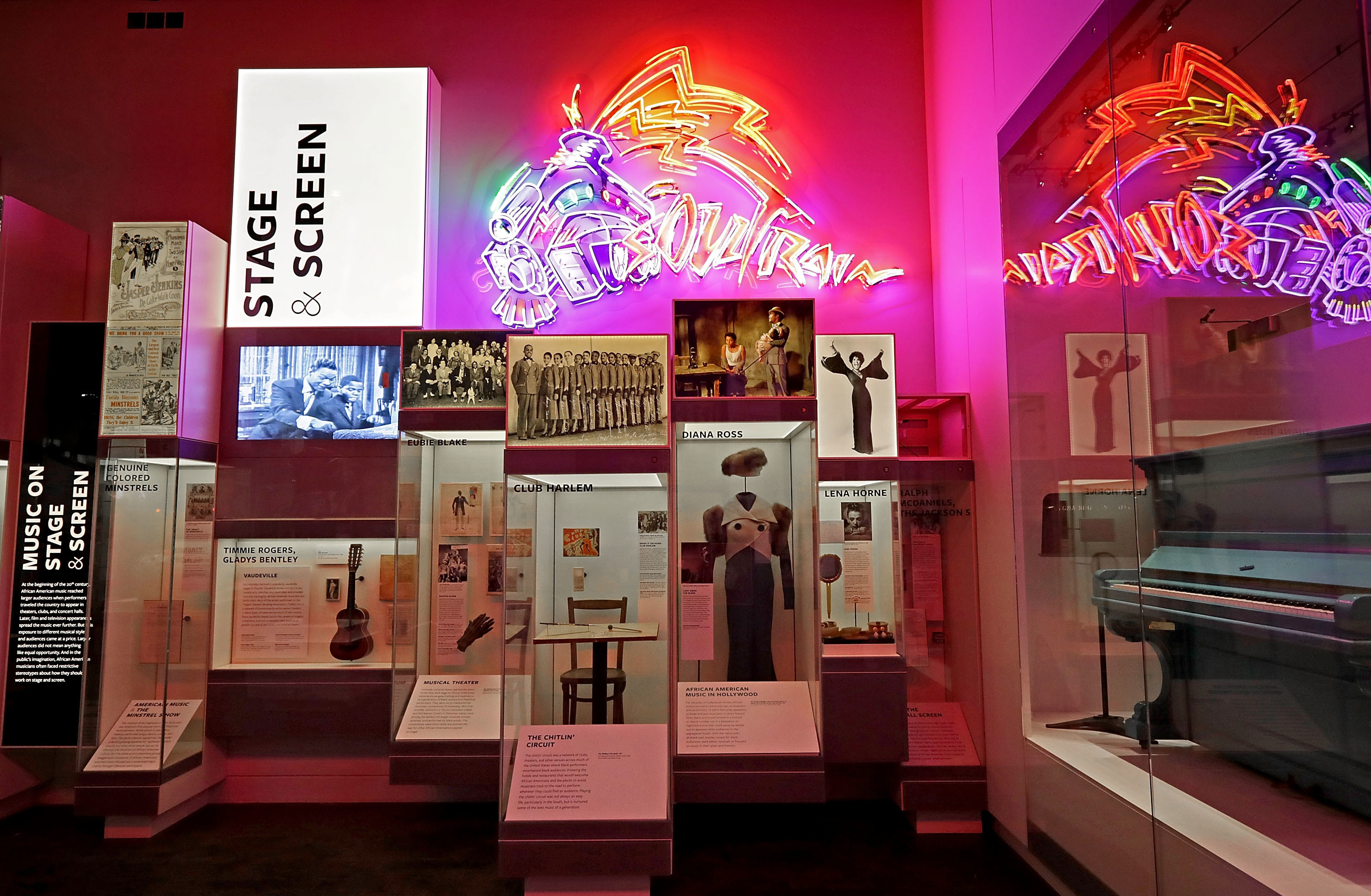 Instruments, costumes and other artifacts fill the “Taking the Stage” section of the fourth floor Culture Galleries at the NMAAHC.Chip Somodevilla/Getty Images

And yet, it is not a museum just for black Americans, Adjaye says.

“It’s really about what America can do. … The (National) Mall is where America does that,” he says. “This building is part of the public realm; it’s very much part of the world that everybody has access to.”

And that’s at the heart of the museum’s design: Adjaye wanted a structure that both respects its place on the Mall and gives back to it, connects it with what surrounds it and reinforces the idea that the museum is for all Americans.