New demonstrations in Ferguson, Mo., led to a standoff with police and the arrests of 23 people Monday night, one day after a vigil for Michael Brown was marred by gunfire. The arrests came as police in riot gear tried to force people to disband and leave the street.

The night also brought a new development to Ferguson: sometime after midnight, "a group of five white men who call themselves the Oath Keepers arrived on the scene,"St. Louis Public Radio reports. "They carried assault weapons, which raised alarm from protesters."

The Oath Keepers members said they had come to help keep the peace. The group saysits core membership is made up of veterans and active-duty members of the military and first responders, such as police and firefighters.

Monday night did not bring new reports of violence or property damage, according to the St. Louis County Police. St. Louis Public Radio says that in addition to the arrests, police used pepper spray to try to break up the crowd of demonstrators on West Florissant Avenue. 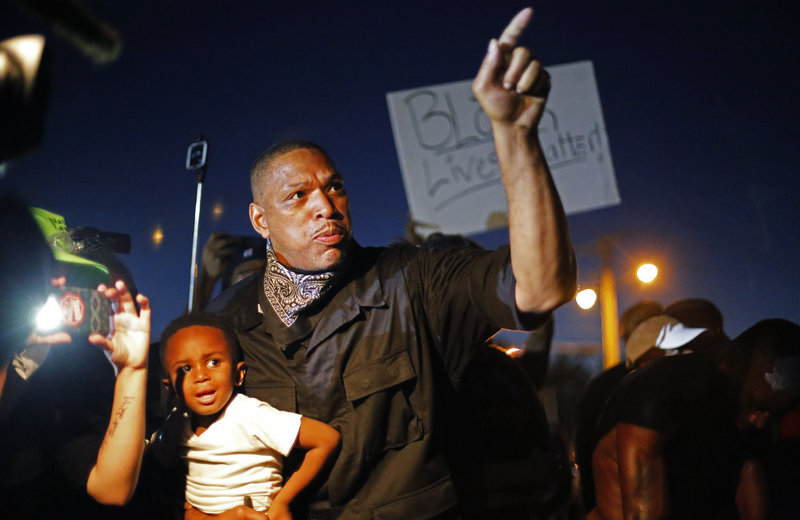 The new round of demonstrations center on Sunday's anniversary of the killing of Brown, an 18-year-old black Ferguson resident who was unarmed when he was shot by (now former) police officer Darren Wilson, who is white.

On Sunday, an outburst of gunfire disrupted protests and left an 18-year-old African-American man critically wounded by police.

Also Monday afternoon, activist and philosophy professor Cornel West was among protesters arrested at a sit-in at the St. Louis County Federal Courthouse.

U.S. Attorney General Richard Callahan said that nearly 60 protesters were arrested Monday "for obstructing the normal use of the entrances" to the federal courthouse in St. Louis.