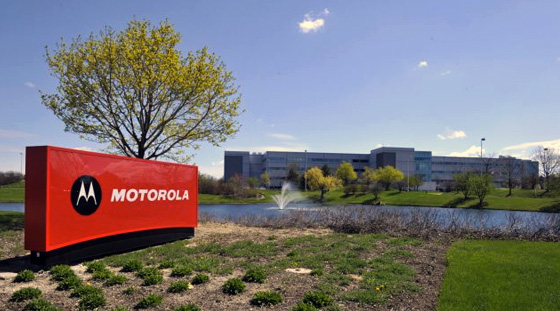 The Libertyville campus of Motorola Mobility — with its manmade lakes, sober exterior and acres of parking — represents the golden age of the suburban corporate headquarters.
And next year — less than 20 years after it was built — the complex will be empty. Motorola Mobility CEO Dennis Woodside and Chicago Mayor Rahm Emanuel announced Thursday the company will move all 3,000 workers from the Libertyville campus to the upper floors of Merchandise Mart. The 80-acre auburban campus was built in 1994.
The move brings jobs downtown — part of a reversal of fortune in which the city is now snatching corporations from suburbia. And as a result, a building type with a future that once seemed rock solid now appears under threat. United Airlines vacated its 66-acre Elk Grove Township headquarters — it even has tennis courts — for downtown Chicago beginning in 2007. The campus, designed by SOM, won three different American Institute of Architects awards since its completion in 1968.
The United Airlines campus is for sale. And it isn't alone. On any given week, the internet and the back pages of trade journals are filled with "for sale" ads for suburban office parks and headquarters. It wasn't always this way. Much like suburban shopping malls, these corporate utopias — air conditioned, new, private and safe — were once very much the hottest thing around. From the 1960s through the end of the 20th century, corporations — Motorola, Sara Lee, and more — left Chicago for a new life in the 'burbs.
But now things are changing. Corporations are downsizing and the new generation of workers does not want to toil in the suburbs. A story last week in the Boston Globe discusses how young workers in the tech and creative fields prefer working in cities and getting to work by public transit.
"In the 1980s, when you wanted to work and raise a family, you went to the suburbs and that’s where most tech workers wanted to be," the Globe quoted a 55-year-old owner of a mobile phone software company. "But today the demographics are changing, and many people want to work, live, and even raise families in the city.”
As companies accommodate downsizing and the shifting needs of a demographic, big suburban office complexes become vulnerable. Allstate is looking to sell its 64-acre campus in South Barrington — it was vacated by the company in a cost-cutting move — for $15 million. The company wanted to just raze the property, but village officials intervened.
In addition to office space, the empty property features an 800-seat cafeteria, five private dining rooms and, as the photo below shows, the usual office park lake. The complex is only 30 years old: 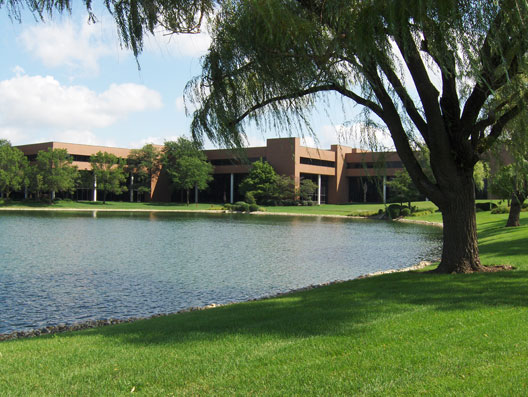 Can these buildings be repurposed? And into what? Corporate and religious retreats? Universities? Motorola Mobility said it will work with Libertyville and Lake County on a new purpose for the campus — and it will be worth watching. What to do with these buildings is suburbia's next big challenge.