After 22 years in prison, Roberto Almodovar walked out of the Leighton Courthouse in Chicago a free man on Friday after Cook County State’s Attorney Kim Foxx dismissed double-murder charges against him and an accomplice.

Almodovar and William Negron had been imprisoned since 1995 for a double-murder they said they didn’t commit.

Almodovar was released around 2 p.m. after charges were officially dropped during a court hearing Friday morning. Negron is expected to remain imprisoned on a different murder conviction.

"What I wanna do now?" Almodovar said. "Right now, wanna spend some time with my daughter, quality time, with my family, eat some Puerto Rican food — pasteles, you know."

Almodovar said daughter was 6 months old when her dad was arrested.

Inside the packed courtroom, a sheriff’s deputy warned the crowd that outbursts would not be accepted. One man reminded the deputy that many people in the room have 22 years of emotions. After charges were officially dropped, a group of supporters went into the hallway to talk and hug.

Outside the courthouse, supporters and protesters gathered with signs. 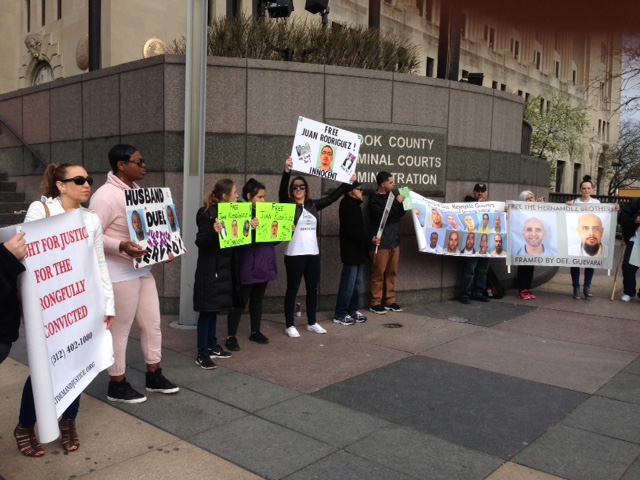 Lawyers for Almodovar and Negron requested a new trial after a key investigator in the case, detective Reynaldo Guevara, was accused of coercing witnesses.

Prosecutors argued that Almodovar and Negron shouldn't receive a new trial. But on Wednesday, Foxx reversed course and said prosecutors would withdraw their opposition after a "thorough and deliberate" evidence review.

Linn said he was surprised to learn prosecutors would not seek a new trial.

"I was stunned,” Linn said before dropping the charges. “I'd never seen anything like this,"

Negron’s attorney, Russell Ainsworth, said that Negron now has to be re-sentenced for another murder, but if the new sentence is 46 years or less he could be released on time served. A co-defendant in that case was previously sentenced to 30 years in prison.

The Associated Press contributed to this story.