A program inside a theater on Chicago’s North Side feels a little like a talent show, or maybe a family reunion. Performers step up from the audience to recite original poetry, do interpretative dance or sing.

The sound quality’s spotty. The pacing’s a little off. But this isn’t about slick production values or seamless performances. The goal here is far more ambitious: to bridge the divide between Jews and Muslims in Chicago.

The show is called “Café Finjan,” after the Hebrew and Arabic words for a metal coffee pot. It showcases Muslim and Jewish poets, musicians, painters and more. It’s one of several interfaith events that share the goal of getting Jews and Muslims to move past historical tensions and distrust so they can work together and help solve some of the city’s urban problems.

“The paradigm that we’re trying to create is that we have an interest in what kind of society we have here, even though we also have strong concerns and interests about what happens to our brothers and sisters, to our cousins and to our friends in other places in the world,” said Asaf Bar-Tura, formerly of the Jewish Council of Urban Affairs. He spent five months with an interfaith team planning the café. 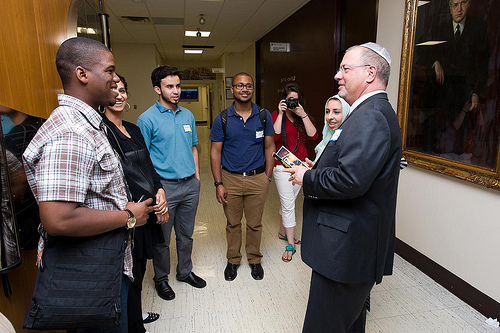 He acknowledged those political differences over Palestine and Israel remain painful and deep.

“There’s a tension there,” Bar-Tura said. “But we can’t overcome these tensions, we can’t discuss the issues, without getting to know each other first. You don’t dive into ‘Oh, tell me what your ideology is.’ You first (say), ‘Tell me about your family, tell me about what you do, what does your day look like, what do you want for your kids?’ And then we can get into these deeper discussions.”

The JCUA started working closely with Muslim groups more than a decade ago, after noticing rising Islamophobia following the Sept. 11 attacks. Their most popular event is “Iftar in the Synagogue,” where Jews and Muslims share a meal to break the fast during Ramadan. In just four years, attendance jumped from 90 people to more than 500.

“We started this program to stand in solidarity with our Muslim brothers and sisters to say, ‘We feel your pain, and we are going to help you fight against discrimination,’” said Judy Levey, JCUA’s executive director. “Because that’s what we do. That’s who we are.”

The events are about more than poetry and hummus. The JCUA, the Chicago Board of Rabbis and the Council of Islamic Organizations of Greater Chicago sponsor periodic rabbi-imam dialogues. They’ve discussed things like the role of Shariah law in a democracy and their shared dietary traditions.

Jewish and Muslim activists have lobbied to demand immigration reform, to stop foreclosures and to protest anti-Muslim bus ads. After a baby was fatally shot in Chicago last spring, they went together to her funeral. There’s even been  Jewish-Muslim bike rides.

Activists on both sides hope these events will lessen suspicion and lead to partnerships in the city they share and call home.

But some say the results are mixed.

“Qualitatively, in some ways, I would say maybe they are better,” said Aaron Cohen, the spokesman for the Jewish Federation of Metropolitan Chicago. “Quantitatively, in terms of seeing vast numbers of people engaging, I wouldn’t say that needle has moved much either way.”

Cohen’s a hopeful guy, and well-liked by Jewish and Muslim activists. He’s been part of Jewish/Muslim dialogues, and he took an interfaith trip to Turkey.

But he says there are stumbling blocks to interfaith cooperation. Unlike the JCUA, the Federation won’t formally work with the Chicago office of the Council of American Islamic Relations, a civil rights agency well regarded by the Muslim community. Cohen said that’s because many were offended by anti-Semitic signs spotted at a CAIR rally a few years ago.

“That’s crossing a very big red line,” Cohen said, adding that statements demonizing Jews or Israel can’t be tolerated. “History delivers on our doors an awful lot of baggage, and we really need to make conscious choices about how much of that baggage we’re going to schlep with us into the future.” 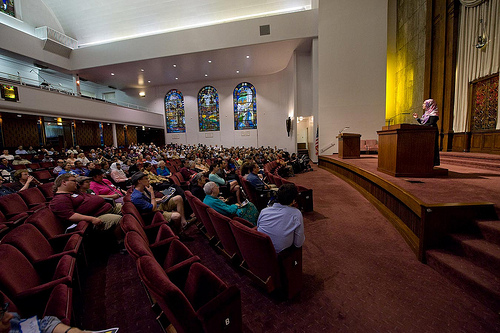 “Obviously, we can’t control every single individual in a massive rally,” said Ahmed Rehab, the executive director of Chicago’s CAIR chapter. “However, the facts are that when we saw the sign, we removed it as organizers, because it does not mesh with our values.”

“We stand against anti-Semitism,” he said.

Rehab said he believes his strong critique of Israeli policy, not the signs, is the real issue – which federation leaders deny.

Rehab said he thinks some federation leaders are out of touch with younger Jews:

“Especially the new generation, it’s not intuitive for these young men and women to look at each other through a fence, or see each other as enemies or rivals,” he said. “Because they do have a shared common culture; they share the same appreciation for music, for movies. They were born and brought up here.”

Despite the challenges, Rehab is hopeful. He believes more Jewish and Muslim youth want to work together, and that cooperation is the wave of the future.

That seemed to be the case back at Café Finjan. Muslim girls wearing headscarves nodded along with a klezmer band. Gray-haired Jewish activists applauded warmly for a student who recited a poem about being a Pokemon master and a Muslim

One of the attendees, software developer Najim Yaqubie, is Muslim. He said he and his best friend – who’s Jewish -- care more about their friendship than politics.

“We’re both human, we’re both American, we’re both young and we’re just trying to have some fun,” he said. “It doesn’t matter who or where you’re from.”