What’s being billed as the South Side’s first food hall opened this week in the Pullman neighborhood, offering those who live and work nearby a dining option that’s not fast food, and launching three new black-owned businesses as part of ongoing development in the community.

Dubbed “One Eleven,” the food hall and business incubator at 756 E. 111th St. features three restaurants headed by accomplished African American chefs, all with deep connections to the South Side. ’Laine’s Bake Shop will hawk pastries and desserts; Majani will serve up its “soulful vegan cuisine” in this second location; and Exquisite To Go will offer American fare, from wraps and sandwiches to brisket.

The project is spearheaded by the nonprofit Chicago Neighborhood Initiatives (CNI), which paid for the food hall’s buildout. That lowered costs for the chefs, removing some of the risk involved in starting a restaurant. Tax subsidies — including $4.5 million in federal New Markets Tax Credits and $500,000 from the city in tax increment financing (TIF) funds — helped remediate what had been vacant industrial land and build the strip mall where the food hall is located.

“We want to show that this is a model that can be replicated,” said Ciere Boatright, who oversaw construction on the project for CNI. “Our vision is that they're going to be so successful that they’ll grow out of this space. ... And what it ultimately will do is create space for three new restaurants that want to test the market in the same way these first pioneers are.”

All three chefs said the assistance was vital to opening their new restaurants. And they see the new Pullman food hall as one pathway to an economically stronger and healthier South Side.

Couldn’t have done it alone 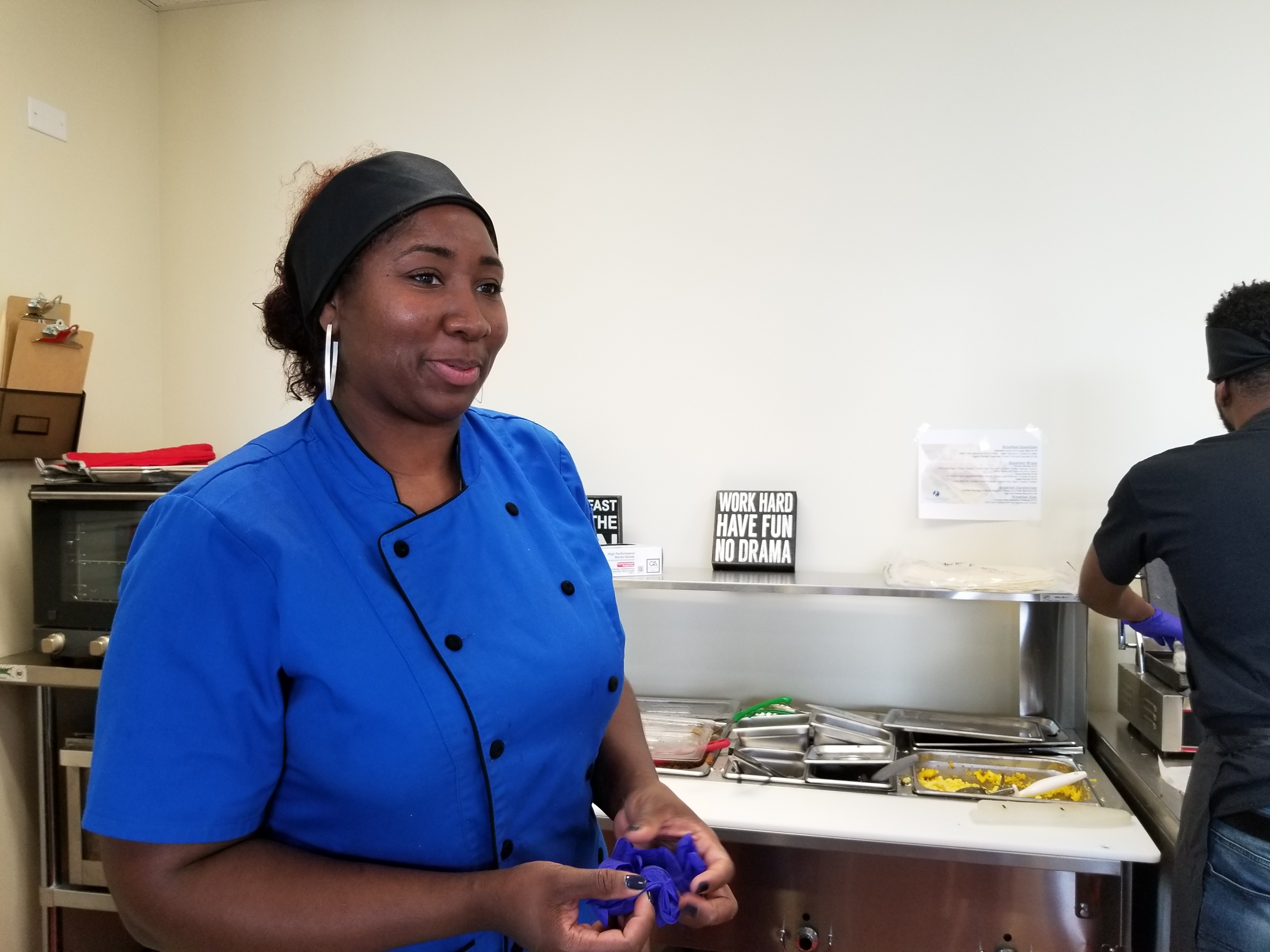 Tiffany Williams, the owner of Exquisite Catering and, as of this week, Exquisite To Go, has a star-studded resume: “Head chef for Lollapalooza two years in a row. And I’ve been on tour with Beyonce and Jay-Z — if you guys know those people,” she laughed.

But up to now, there was no way to get her food, unless you happened to be at an event she was catering. Despite her past culinary and business success, she says starting her own restaurant felt out of reach.

“I wouldn’t have been able to build out a space by myself, on my own,” Williams said.

Some estimates put that kind of work at $200,000 or more, and Williams didn’t have that kind of money. “Access to capital is the hardest thing for small businesses and entrepreneurs,” she said. That’s especially true in the black community, where traditional banks are reluctant to lend and there isn’t as much wealth in the community to draw upon.

When Williams learned about the One Eleven Food Hall, it seemed perfect.

“They were going to pay for the entire build-out, keep the rents low, and keep it as a short-term lease. It was catered as an incubator for food businesses that are ready to expand but couldn’t do it on their own,” Williams said.

Being one of three black owner-chefs at a South Side food hall has special meaning for Williams, in part because it’s so rare. Eater Chicago recently reported that of 24 vendors announced for three new food halls on the North Side, not one is African American.

“When I [read that], this meant so much more,” Williams said. “To show that other black businesses can do it — and do it together — I think that’s the biggest point to highlight. That we’ve become a family in the food hall already.”

Williams says her dream is to eventually open a restaurant in Woodlawn. “This is a stepping stone to a space in my home and where I grew up,” Williams said.

Bringing healthy food to the South Side 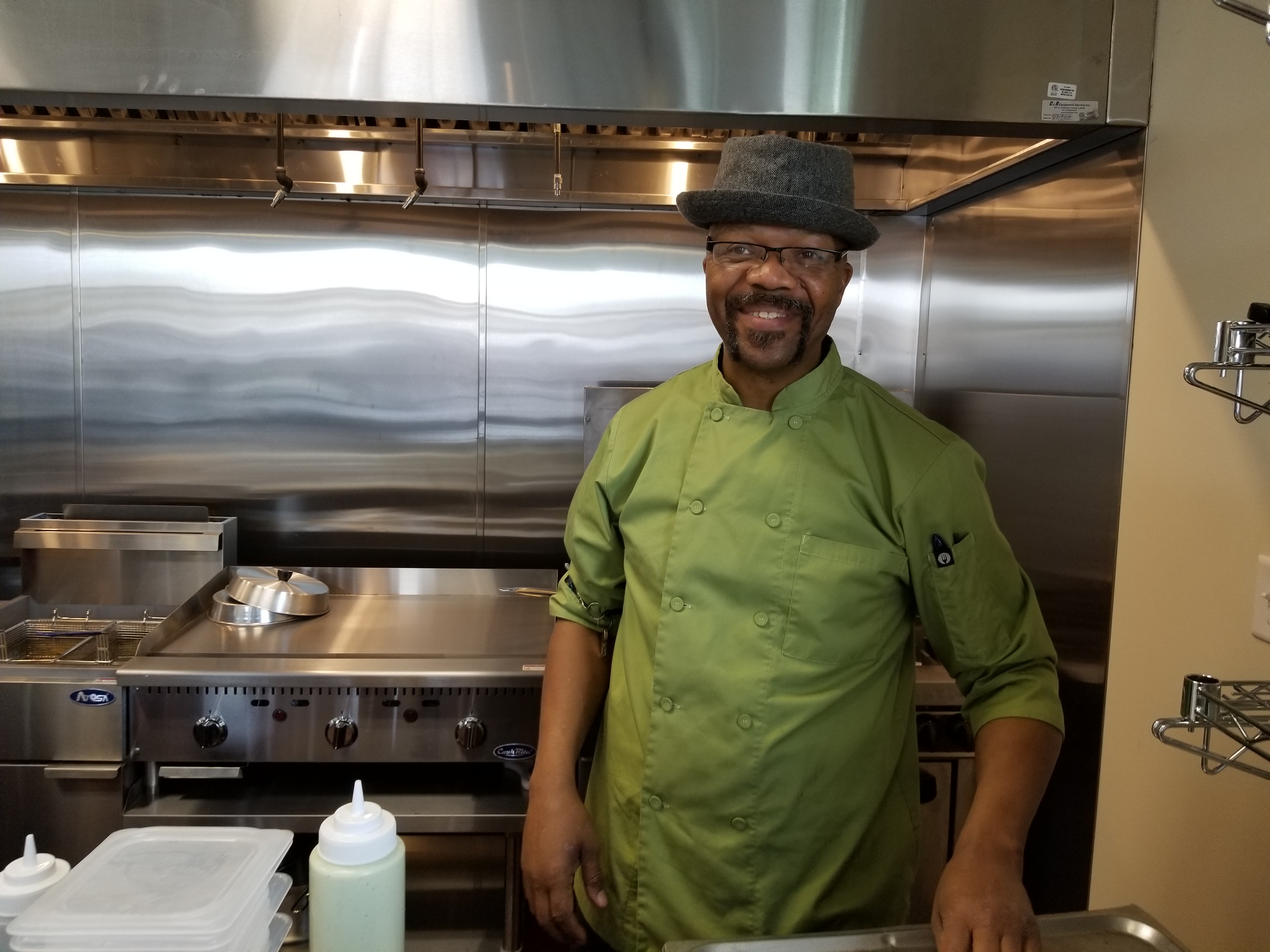 Majani owner Tsadakeeyah Emmanuel grew up in a big family in northern Wisconsin. “We lived on 40 acres. We had our own little garden, so eating fresh food was always central,” he said. Emmanuel describes being shocked when he moved to Baltimore and saw how city dwellers ate.

Since then, he’s been on a mission to bring healthier food to places like the South Side, where in many neighborhoods it’s either fast food or no food.

You might think getting a traditional bank loan to open a second location would be no problem for Majani. Not so, Emmanuel said.

“Traditional banks were not listening,” he said.

“It’s still a struggle for us, even as we’ve grown and we’ve had a couple years of history with the restaurant,” Emmanuel added. “There is definitely some work to be done around getting access to capital … in these types of communities.”

Majani’s menu is full of familiar ingredients and flavors meant to ease people gently into vegan cuisine. There are fritters made from black-eyed peas, jerk tofu, and by far their greatest hit, barbecued cauliflower.

“That is the hook,” said Emmanuel. “I think a lot of people are blown away at the texture, the crunchiness, the pungent flavors. I guess it reminds a lot of folks of like, a chicken wing. So you can get most people to at least try it.”

Emmanuel says his dream is to one day have an all-vegan food hall. 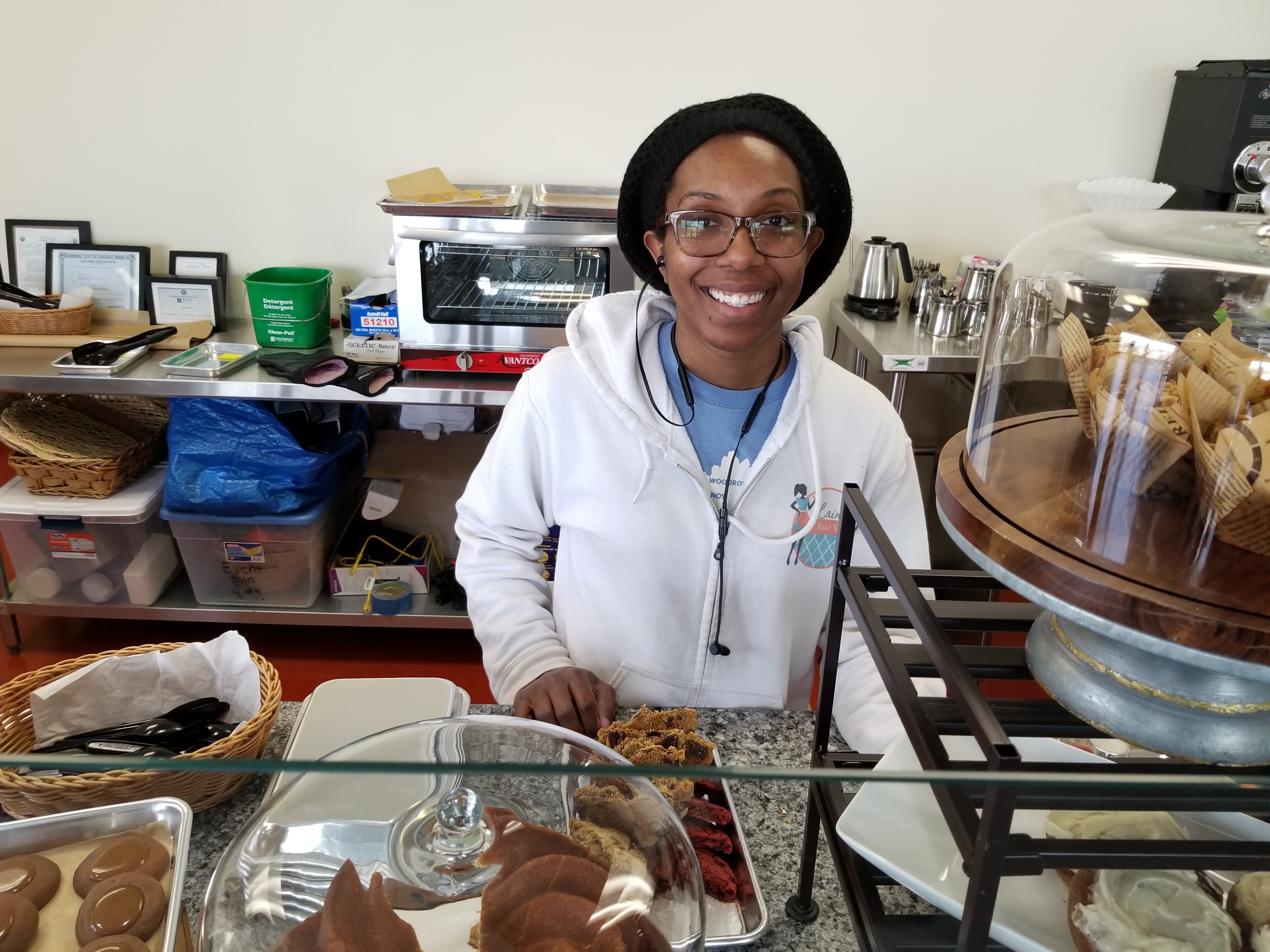 ’Laine’s Bake Shop owner Rachel Bernier-Green started in the food business at a young age. “My first entrepreneurial venture was actually making cookies at my grandma’s house in Roseland and selling them in her backyard,” Bernier-Green said. “I would set up a stand with my cookies and my cousin would have pickles and candy and chips, and we would open up shop.”

Today, Bernier-Green supplies desserts and pastries to cafes and restaurants, including Starbucks and Whole Foods stores in an eight-state region. All that happens out of a tiny production facility in Morgan Park. But her spot at One Eleven is ’Laine’s first formal retail shop. And yes, they will be selling their peach cobbler.

“We’ve literally had people on our Facebook page calling us, emailing us: ‘I had the peach cobbler at this event. When do you open? How can I get more peach cobbler?’” said Bernier-Green.

Bernier-Green has personal connections to One Eleven’s location. Her great grandfather was a Pullman porter. Bernier-Green herself was born in nearby Roseland, and her grandmother still lives there.

Her family used to pass the spot where the food hall is located on their way to church. Much of Pullman was then — and still is today — vacant industrial land.

“It was desolate and it smelled bad. Growing up, that’s what I remember most vividly,” said Bernier-Green. “If my parents rolled down the windows on the way to church, we would all complain.”

Now, to be a part of restoring the neighborhood and giving people jobs is “awesome,” said Bernier-Green. “Especially to be here in a space where there’s also three South Side black chefs that are business owners — and that we’re all coming together to do this — it’s pretty phenomenal.” 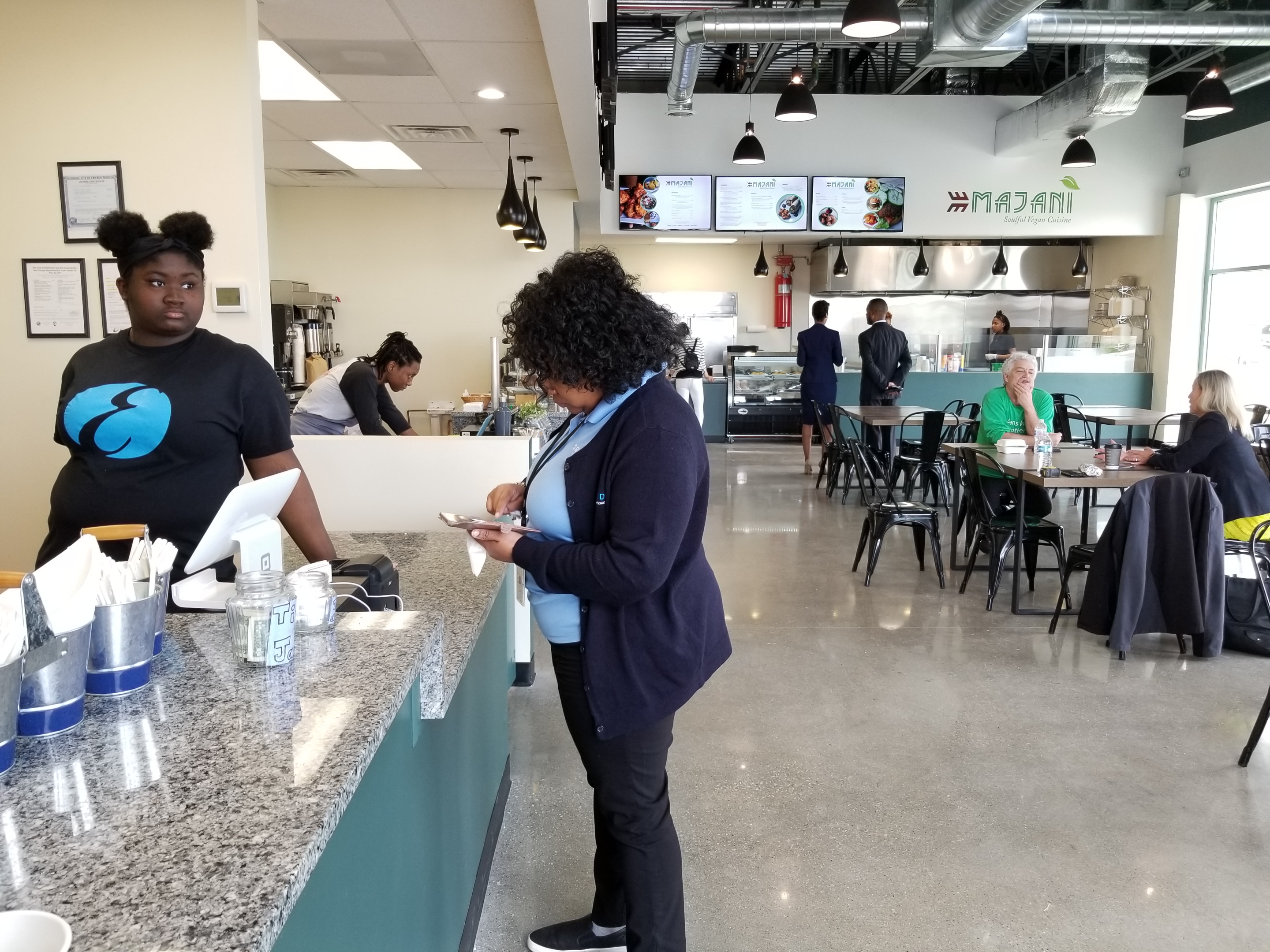 One Eleven is tiny — just six tables — but neighbors say it’s a big deal. “This is needed in this area, and it is appreciated and loved,” said Pullman resident Ellen Kaulig, who was eating breakfast, lunch and dinner from the food hall on opening day Monday.

At one point this storefront was going to be a Chipotle. “This is actually a much better solution because we get to support three local South Side businesses,” Kaulig said.

Edith Bradford — who lives and works nearby— walked over for lunch on opening day.

“I’ve been kind of stalking them since they’ve been building,” said Bradford. “I just can’t wait to get the double-crust peach cobbler — and I’d like to explore more vegan options. So, I’m just excited for everybody.”

She’s also looking forward to having a place in this tight-knit community to commune with her neighbors.