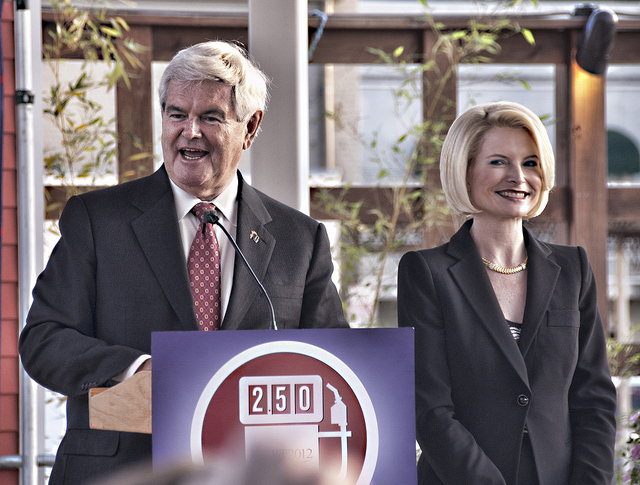 2012 GOP presidential candidate Newt Gingrich dropped out of the race last week, which was not particularly surprising to most people, even perhaps Gingrich himself; this week, he told CBS's Face of the Nation that "[i]t would be inconceivable" for him to be considered for vice president now that Mitt Romney is the presumptive nominee.

"Gingrich's departure was treated as news," said writer Benno Nelson at The Paper Machete. "But why do we make news items out of things that aren't interesting or surprising at all? His campaign has been dead for months, yet he emerges...as a leading story by saying precisely the thing that has the least impact on anyone's life." Read an excerpt below or listen above for more.

"So you probably heard that Newt Gingrich suspended his 2012 presidential campaign. And it's likely that the only way anyone was surprised was people learning that it hadn't be true before.

Newt has had a stranglehold on nonsense throughout the course of campaign. And he's rarely had much of a grasp on anything else-- voters or priorities, for example. According to his website -- which,  for some reason, it's hilarious to me that it's newt.org -- number eight of his top 10 priority initiatives is what he calls the 'Gingrich Treaty,' which would extend the right to bear arms to the entire world.

I'm not kidding, that is priority number eight. So granted, that's below 'Maximizing Medical Breakthroughs in Brain Science,' which is number seven. But it is above bringing judges in line with the constitution, which is number nine, and it's above the government committee on ensuring religious liberty, which is number ten, above any mention of education, which doesn't make the list at all. And it is the only mention of foreign policy. The only foreign policy priority that Gingrich has is arming the entire world.

So I'm authentically really sad to see him go. But the way he left is worth worrying about for what it says about the news, about credibility and the pragmatism of naming self-evident truths."