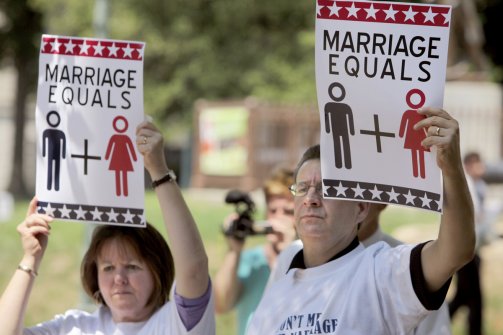 On Wednesday, Dan Savage and Equality Matters gave Chicagoans a heart attack when they informed us that our beloved Bears (the sports team kind) may be collaborating with a hate group. Equality passed along an email from Dr. Jennifer Roback Morse of the National Organization for Marriage, who runs NOM’s Ruth Institute Gala. The “esteemed” doctor (probably a mail-in thing) specifically trumpeted coveted donations from the Bears organization, which included signed memorabilia from Brian Urlacher and Walter Payton.
Dr. Doom wrote:

“This year, we're planning on sending our graduates off with a bang! And we've got some help! Several donors have stepped up and donated terrific items for us to raffle as prizes in an effort to raise funds for ITAF '13...

“For now, you should know that we have two fabulous raffle items from the Chicago Bears Organization (and a huge THANK YOU to the Bears for supporting our message).”

It was news to the Bears organization, who had no idea what Roback Morse was talking about. When WBEZ contacted the Bears for comment, we received the same message that went out to the rest of the press:

“The two items featured in The Ruth Institute gala invitation were personal donations to (President) Dr. Jennifer Roback Morse. Neither was a club donation, nor do they represent the team's view on any social issues. Any remarks stating otherwise are false.”

The Chicago Tribune backed up the team’s assertion that the relationship was in Roback Morse's head:

"I sign a lot of stuff for charity and I don't always know where it goes," Urlacher told the Tribune. "If I would have known it was for this cause, I wouldn't have done it."

Payton's older brother Eddie Payton said he did not know of any memorabilia regarding his brother used to support an anti-gay marriage group.

"This is the first I've heard of it," said Payton, a former NFL kick returner. "Walter treated everybody equal. Only Walter could speak for himself, but it's a touchy subject. It should be a non-subject."

Before the explosion got too big, Roback Morse decided to walk away from it slowly and coolly, like in a Michael Bay movie, lest anyone realized what had happened. To minimize damage, the goodly doctor issued a complete retraction:

"The Ruth Institute is not working with the Chicago Bears organization or any of its players past or present to promote our upcoming auction. The memorabilia we are auctioning off was acquired by me personally, not through the team or players. We understand that the Chicago Bears organization takes no position on social issues, and we regret any confusion we may have caused on this point."

But what did happen here? If you translate this email from PR doublespeak into plain English, it comes out to:

The Latin roots can be a little misleading, but according to my scholars fluent in hate, that’s the gist.

Chicagoans have taken solace in knowing that the Bears were completely let off the hook here for any wrongdoing. But the reality of NOM is still sick and depressing. The National Organization for Marriage is a notorious hate group, as measured by the Southern Poverty Law Center’s “Flaming Bigotry Meter.” (Their hate goes up to 11.) Equality Matters surveyed the organization last year only to find that NOM conferences “peddled” anti-gay propaganda to attendees.

According to Equality, this is what everyone’s favorite Dirty Bigot Liars were telling people:

In addition, one of the speakers at ITAF, Robert Gagnon, once compared high schools’ Gay-Straight Alliance groups to “Nazi skinheads” and opines that LGBT people are “worthy of death.” Gagnon will be presenting at the conference again this year, because one good hate speech deserves another.

This might not be surprising to anyone familiar with NOM's radical, exclusionary politics, nor will it be a shock that opponents of marriage equality are willing to lie and spread false propaganda to curtail the nuptial rights of queer people. We’re seeing that in Illinois. Remember those robocalls about “homosexual money?” If it was a promise, I’m still waiting to receive mine. I’m hoping they show up with a big, gay million dollar bill like Ed McMahon.

However, despite what the organization’s name suggests, it’s not just about marriage. It’s about keeping queer people afraid. It’s about maintaining a system that works against queer families, lives and livelihoods and rolling back the hard-earned rights we’ve fought for. It’s about ensuring that it will never get better, ever — no matter how many people die to get there.

It’s particularly pathetic that NOM is trying to bring the Chicago Bears into their anti-gay politics, especially at a time when the NFL is attempting to fight its own history of homophobia and queer exclusion. Last week, the NFL players’ union came out to support same-gay marriage, a huge step forward for an industry that’s been afraid to even acknowledge the existence of queer people. Slowly, the NFL is coming out of the closet, and NOM is trying to shove them right back in.

Other than their right-wing supporters, few take NOM seriously. Who cares about Roback Morse or what she thinks? No one even knew who she was until this week. Luckily, they won't know next week, either. Obscurity is a beautiful place.

However, a great number of people care what the Bears think. Locally and nationally, the Bears are a symbol of masculinity and part of how the culture teaches young boys to be men (which, apparently, means covering your body in orange and blue paint and yelling “Woop! Woop!” in the cold).

As a kid reading Sports Illustrated, I looked up to my sports heroes to teach me what brotherhood and leadership were. Teams throw around these concepts but so often don’t live up to them.

Chicagoans hoped that the Bears would come out on the right side of history and show queer and allied fans that everyone’s support matters. By speaking out against NOM's claim, the Bears have sent a great message about what teamwork means to them: that a team means all of us, Bears and Chicagoans alike. If they could show their support by one day having a gay player on the team, all the better.

In the meantime, the Bears have exposed NOM's hate for what it is: full of sound and fury, signifying nothing.