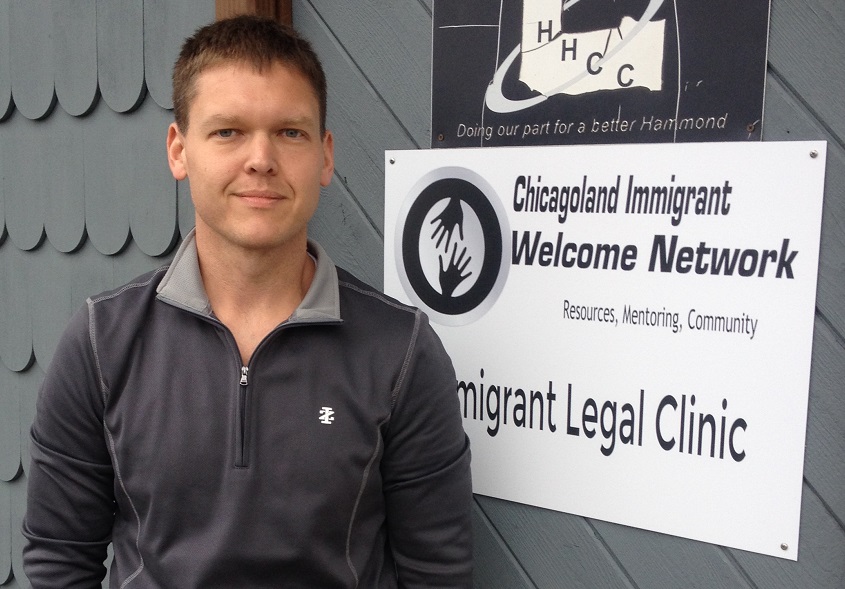 A Syrian refugee resettlement program in Northwest Indiana could be on hold before it even has a chance to start.

Tony Burrell founded the Chicagoland Immigrant Welcome Network based in Hammond, Ind. just over a year ago.

“There’s a lot of stuff in Chicago proper reaching out to the vulnerable in our community, especially immigrants and refugees, but there was a not a lot going on here in Northwest Indiana,” Burrell told WBEZ on Tuesday.

“They’ve been from Eastern Europe, from Asia, from India, and even from the Middle East,” Burrell said.

About a month ago, the agency began setting up a program to help resettle refugees from Syria.

But then came the terrorist attacks in Paris last Friday where some 129 people, including one American, died. One of the attackers reportedly had a fake Syrian passport and traveled to Europe along the same route as many asylum seekers from the Middle East.

“In the wake of the horrific attacks in Paris, effective immediately, I am directing all state agencies to suspend the resettlement of additional Syrian refugees in the state of Indiana pending assurances from the federal government that proper security measures have been achieved,” Pence said in a written statement. “Indiana has a long tradition of opening our arms and homes to refugees from around the world but, as governor, my first responsibility is to ensure the safety and security of all Hoosiers. Unless and until the state of Indiana receives assurances that proper security measures are in place, this policy will remain in full force and effect.”

Pence has the backing of those like U.S. Sen. Dan Coats, a fellow Republican from Indiana.

“I support Indiana Governor Mike Pence’s decision to suspend the resettlement of Syrian refugees in Indiana. While the United States is a compassionate and welcoming country, our government has an obligation to protect American citizens,” Coats said in a statement on Facebook. “We should not accept any Syrian refugees in Indiana or across the country unless the U.S. government can guarantee, with 100 percent assurance, that they are not members, supporters or sympathizers of ISIS.”

“I don’t have a problem with people wanting to keep our country safe. We want security we want safety and we have a right and responsibility to create that for people,” Burrell said. “But we need to remember the overwhelming majority of refugees who are trying to come to our country want the exact same thing. We have an opportunity to love them, help them and not let fear get the best of us.”

“Living my whole life in Northwest Indiana and how amazing the Hoosier citizens are, I never in my life thought this would come to reality that the governor, the leader of this state would make such a proclamation,” said Ferass Safadi, an American-born Syrian who's the owner of the Mirage Grill in Merrillville.

He’s among 200 or so Syrian families who call this region home. Most work as doctors, lawyers and other professionals.

Safadi says the violence in France is something many in Syria encounter regularly.

“It shows why these thousands and thousands of refugees are leaving Syria and leaving their homeland because they are being victimized under these terrorists on a daily basis,” Safadi said. “They are just trying to settle in somewhere they can start a life for their children.”

Since 2010, about 40 Syrian refugees have resettled throughout Indiana, according to the Indiana Family and Social Services Administration (FSSA) which administers the Syrian resettlement program.

It’s unclear if — and when — any more will join them.