Northwestern Medicine, one of the richest and biggest hospital networks in the Chicago region, is blocking patients from seeking jury trials and class-action lawsuits if they want to talk with their doctors online.

The restrictions apply to digital services, including MyChart, Northwestern Medicine’s online tool that many patients use to communicate with their physicians. It’s where they email questions, request medication refills, book appointments, and get test results. Most hospitals have this kind of communication tool, but Northwestern Medicine introduced some new rules to use it last month.

Now, any patient who uses MyChart has to agree to take up disputes with Northwestern Medicine either on their own in small claims court or through a private legal process known as arbitration. 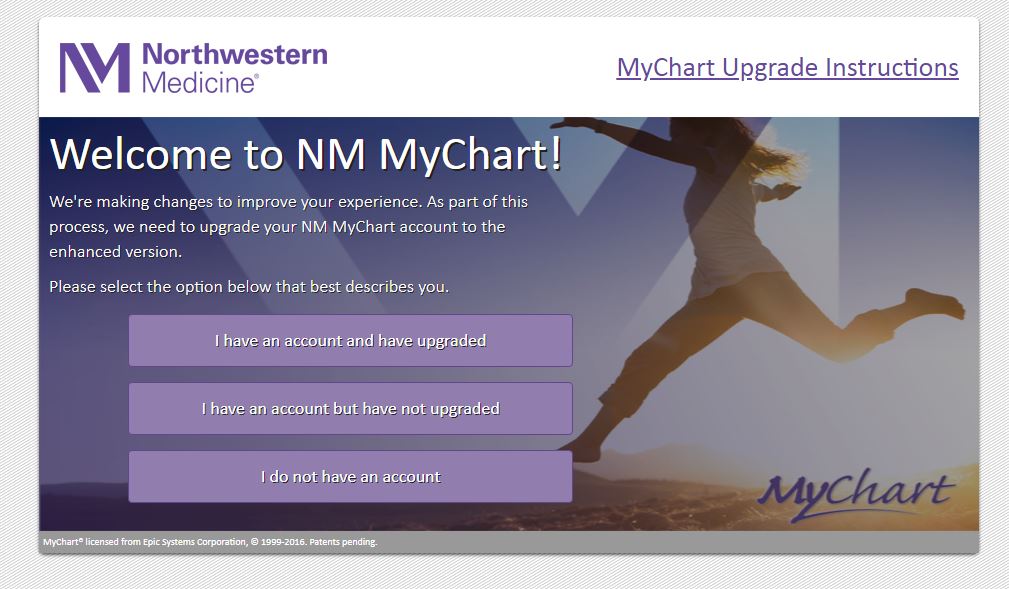 This doesn’t apply to medical care. But if information on MyChart is used improperly, whether by patients or Northwestern Medicine, there are now limits to how either side can take legal action. If they go before a private arbitrator, that person’s decision is final, and the outcome is confidential, Northwestern Medicine’s agreement says. In small claims court, a judge — not a jury — would decide the case.

Although arbitration might be cheaper and quicker than courts, this route is particularly controversial. Brian Fitzpatrick, a law professor at Vanderbilt University, called the process “an alternative justice system that’s secret.”

Many arbitration decisions are confidential, he said. And while judges are typically appointed or elected, in arbitration it’s companies that typically pick — and sometimes pay — the arbitrators. That gives arbitrators an incentive to side with the companies if they want more business later, experts said.

“When people are harmed by companies, the vast, vast, vast, vast majority of them will do nothing about it … if they’ve got to do it by themselves,” he said. “The class action overcomes that problem by letting one person sue for everyone else. It holds the companies accountable for everyone’s harm.” 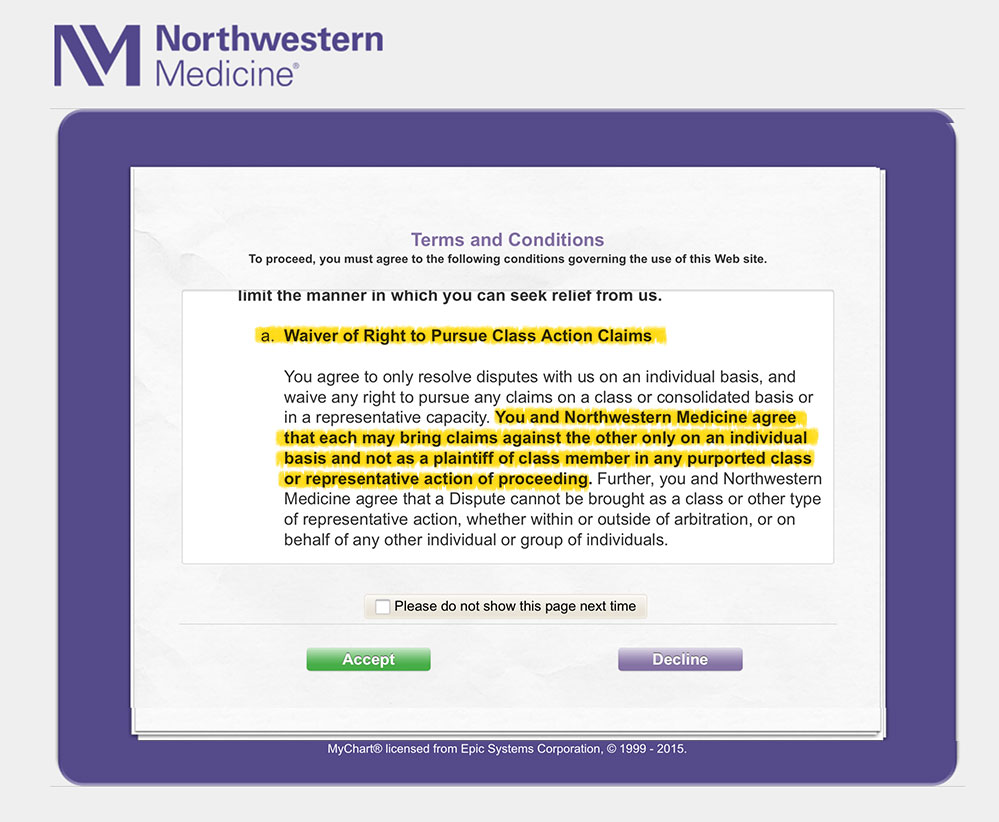 In an email, Northwestern Medicine spokesman Christopher King said the new rules apply only to digital services, like MyChart. He would not make anyone available for an interview to further explain the new legal requirements or what fueled the changes.

Patients (including myself) learned about Northwestern Medicine’s new rules last month when they opened MyChart. A lengthy legal agreement popped up and blocked them from proceeding. Users are faced with two options: Accept or decline the new terms. If they say no, they lose access to MyChart.

The research-focused academic health system, which had more than $5 billion in 2018 revenue, is known for its specialists, and for delivering the most babies by far of any hospital in Illinois.

Arbitration has yet to gain steam with hospitals the way it’s mushroomed in other industries as companies look for ways to protect themselves against expensive lawsuits. That’s particularly the case with class-action complaints, which could force companies to enact sweeping changes or pay out big settlements, experts said.

Consumers sign waivers all the time, such as when they’re buying cell phones or renting cars.

“You don’t realize how many times a day you probably sign away your right to sue,” said Ann Marie Marciarille, a law professor at the University of Missouri who specializes in health care. “It would give you a little restless sleep tonight if you actually knew.” 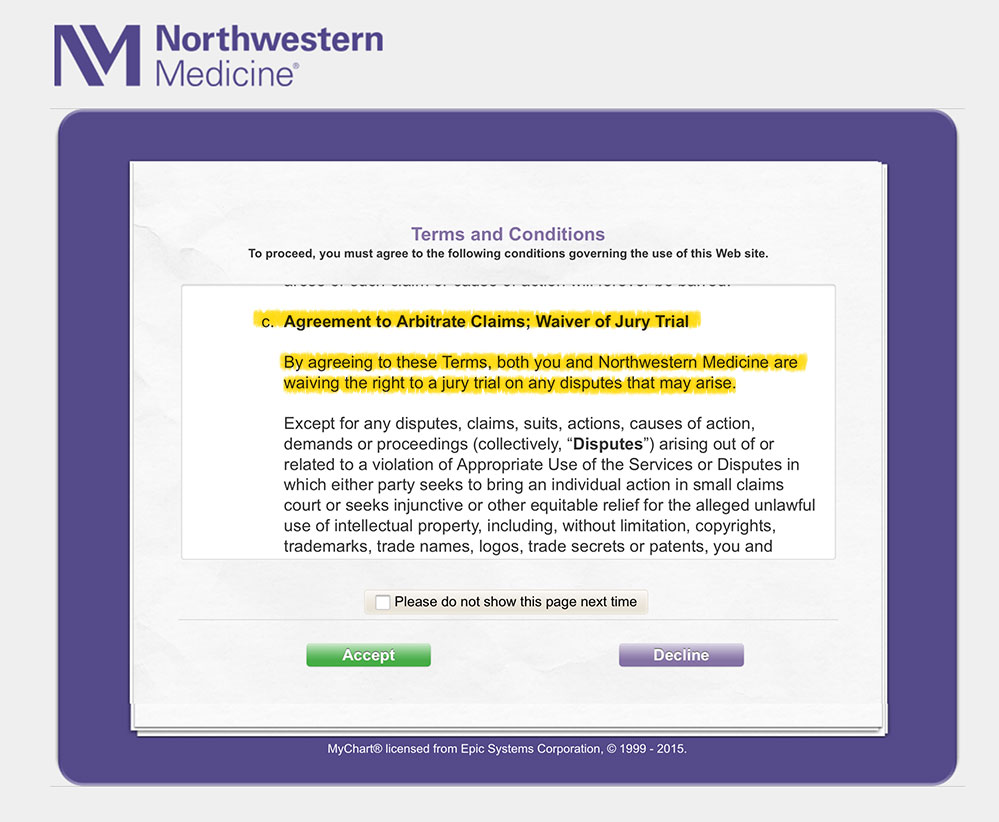 That doesn’t mean arbitration is always bad. The process tends to be cheaper because it’s less formal than court. There might not be a lengthy and expensive discovery process, where both sides gather and present evidence and witnesses. That often requires attorneys on both sides to comb through potentially thousands or even millions of documents.

“You could see how this would appeal to people with relatively small claims who just want a quick disposal of the problem,” Marciarille said. “If they’ve legitimately been wronged, they just want money so they can help fix it.”

But that also means consumers might not have access to as much evidence as they would in court to defend themselves and prove their cases. Because it’s not court, there might be no public record of an arbitrator’s decision.

Northwestern Medicine would use the non-profit American Arbitration Association to arbitrate disputes, the health system’s new agreement said. Neil Currie, an AAA vice president, said the organization strives to be transparent and neutral.

“The neutrality we have as an organization is maybe the most paramount component,” Currie said.

AAA arbitrators are required to disclose previous companies whose cases they’ve overseen, as well as attorneys or witnesses they’ve worked with before. AAA makes public the companies that write the organization into their contracts should they need an arbitrator, and how much arbitrators have awarded consumers and companies that used AAA in at least the last five years.

Companies pay AAA arbitrators’ fees. In-person hearings can cost about $2,500 a day. But Currie doesn’t see that as a conflict of interest.

“If (consumers) are required to pay thousands to an arbitrator, the concern is it would be a burden for many people to participate in arbitration,” he said.