Most of Chicago is flat as a pancake. That’s why the neighborhood I grew up in was special. We had a hill. I was so impressed that when I got my first camera, I went out and took a picture from the top of its dizzy heights.

Actually, our hill wasn’t a real hill. The rise along Narragansett Avenue was a ridge. Long ago Lake Michigan was much larger, and its waters covered most of what’s now the city of Chicago. The ridge marked one of the ancient lake’s beach lines. 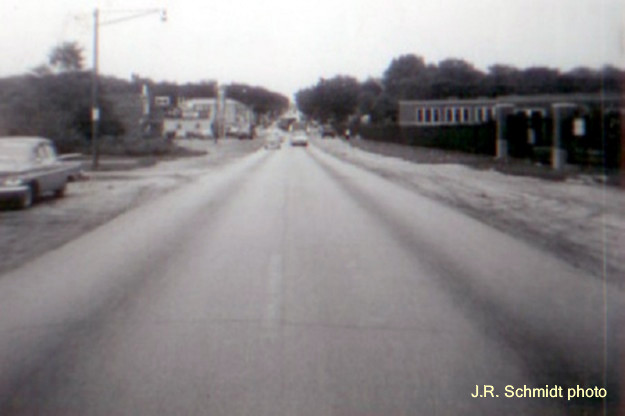 That same Narragansett ridge stretches into Oak Park. Once I became an adult, I never paid much attention to it. Then, a few years ago, I was driving west on Chicago Avenue through Oak Park. Just as I crested the ridge I saw the historic marker on the parkway to the right.

The marker told the story. My childhood ridge was a continental divide.

Chicago was settled because of its convenient location between the two great watersheds. Think of the native peoples—or Marquette and Jolliet—paddling their canoes down Lake Michigan and the Chicago River, portaging a few miles over the ridge, then catching the Des Plaines River on the way to the Mississippi. We all learned that story in Early Chicago History 101.

The Oak Park markers were erected through the efforts of retired architect Bill Dring. With the help of Dennis McClendon at Chicago Cartographics, he located a 1927 map that identified the ridge as a continental divide. This particular one is known as the St. Lawrence Divide, because the east-flowing waters reach the Atlantic via the St. Lawrence River. 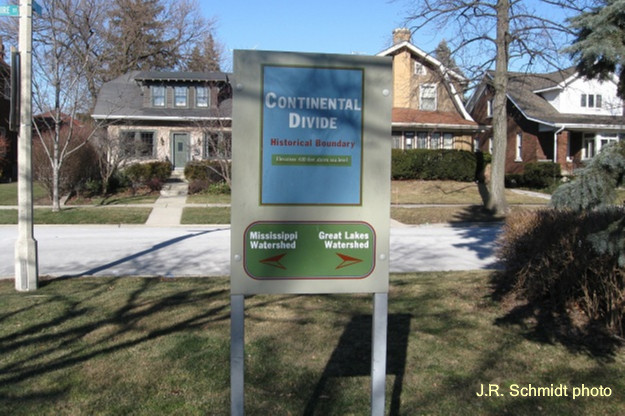 A few spoilsports have claimed that the Oak Park ridge isn’t an actual continental divide. Drop a bottle into the water and send it west from the ridge toward the Mississippi and the Gulf. If that bottle doesn’t get picked up or smashed, it’s still going to wind up in the Atlantic eventually. So what’s the big deal?

I don’t buy that argument. Over 70 percent of the earth’s surface is water, and all of it flows together at some place or another. The continents are really nothing more than giant islands. So if you want to get hyper-technical, you have to throw out the Rocky Mountain Divide, too.

Most of us will never get to Four Corners, and never be able to stand in four states at once. But with very little effort, we can straddle two great watersheds. So let’s all celebrate the Oak Park Continental Divide.