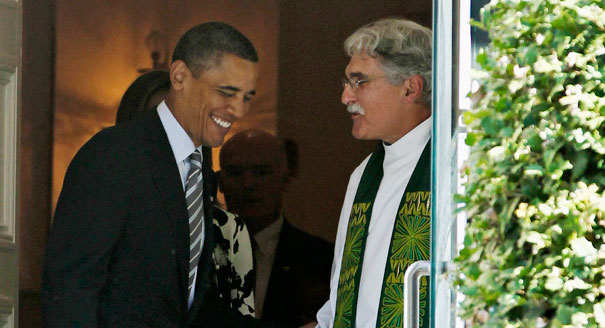 President Barack Obama finally got it right: He picked another Cuban to participate in the inauguration, a gay-affirming Episcopal priest named Luis León. Miami has never loved Barack as much as it does these days, with two locals sharing the inaugural spotlight: León and poet Richard Blanco, the son of Cuban exiles and the first openly gay man to participate in these festivities.

That’s right: In his inauguration for a second term, after a campaign in which Bush explicitly and outrageously supported a constitutional amendment to ban same sex marriage, Bush -- the evangelical and right wing fave -- reached out to León, whose church has gay, non-celibate priests, once had a gay bishop, blesses same sex unions and ordains trans priests.

And León didn’t mess around when he stood before Bush. Check out the coverage from Fox of the inauguration:

“Rev. Luis Leon gave a sweeping inaugural sermon, discussing post-Sept. 11 fears and the general ‘goodness’ of people. Leon said his and his wife's friendship with Bush had grown over the last four years.

“Invoking the famed John Winthrop phrase used by the late President Reagan about ‘a city on the hill,’ Leon said he hoped the nation could again claim the sense of community that those words inspired.

“‘I hope we can become better people,’ Leon said. As a servant of God, he told the president, he hoped he could invite everyone to be good people, better people, whether black, brown, rich, poor, gay or straight.

"‘We are one,’ the reverend said, adding that he prayed for the president to help the nation overcome fear brought on by terrorism.

"‘Do not let our fear overcome our faithfulness,’ he urged.”

I’m heartened when I read this, and heartened to know that Obama selected such a person, but I’m also unsettled. León seems to have gone mostly under the radar in 2005 -- there’s barely a mention that he’s the first Latino to give the benediction for a presidential inauguration.

But what does it say that Bush invited such a figure to his ceremony? What does it say that, when it’s all over, Bush basically forgot that his whole campaign depended on using queers as boogeymen and turns to a man whose life’s work is inclusivity?

Like I said before when I wrote about the Obama’s original selection, the evangelical anti-gay Rev. Louie Giglio, I get the president’s need to reach out.

But I also confess that, this time, I was glad Obama didn’t reach too far outside his core base. I’m glad he stopped trying to be all things to all people. Honestly, it wasn't working for him. I'm glad he just said, screw it -- I’m gonna have my gay poet, my gay loving Latino minister, my Puerto Rican Supreme Court Justice who prob loves gays, and drag queen fave Beyoncé’s gonna come back for round two.

Honest to God, this is gonna be the queerest inaugural ever.