﻿The Chicago City Council on Wednesday approved an agreement between the Obama Foundation and the city to build the presidential center in Jackson Park. It’s a 99-year lease for $10. The land will still be owned by the city, which will also assume ownership of the Obama Presidential Center buildings after construction.

After the 48-0 vote, Mayor Rahm Emanuel read a letter from President Barack Obama.

“Michelle and I couldn’t be prouder and more excited to bring the center to the South Side, a community that has given us both so much. We look forward to continuing our work with our neighbors and friends across the city to build this center and for it to serve as a reminder to every child in Chicago and every visitor from around the world that potential is limitless,” the mayor read on behalf of the former president.

The $500 million presidential center will include a museum, forum space, Chicago Public Library branch, and public plaza. The Obama Foundation estimates an economic impact of $3 billion for Chicago during the presidential center’s construction period and first 10 years of operation.

While this is the last formal step for the city and a closer step toward groundbreaking, the Obama Foundation still has to go through an ongoing federal environmental review and a legal challenge filed by park preservationists.

In May, Protect Our Parks filed a lawsuit in federal court against the park district and the City of Chicago.

“Defendants have chosen to deal with it in a classic Chicago political way, known as a short con shell game, a corrupt scheme to deceive and seemingly legitimize an illegal land grab, one that will endure for centuries to come, regardless of future changing public park needs and increasingly consequential environmental conditions,” the complaint said.

Last week, the city filed a response denying that construction of the presidential center would violate any laws. Lawyers pointed out that 11 other museums operate on park land in the city — from the DuSable Museum of African African History in Washington Park to the Chicago History Museum in Lincoln Park.

Marty Nesbitt, Obama Foundation board chair, addressed the lawsuit after the city council vote on Wednesday.

“We’re soldiers. We’re going to keep working on it and push it to the finish line. We’re optimistic there’s a path,” Nesbitt said. A spokesman with the city’s law department said the city plans to file another motion contesting the lawsuit. 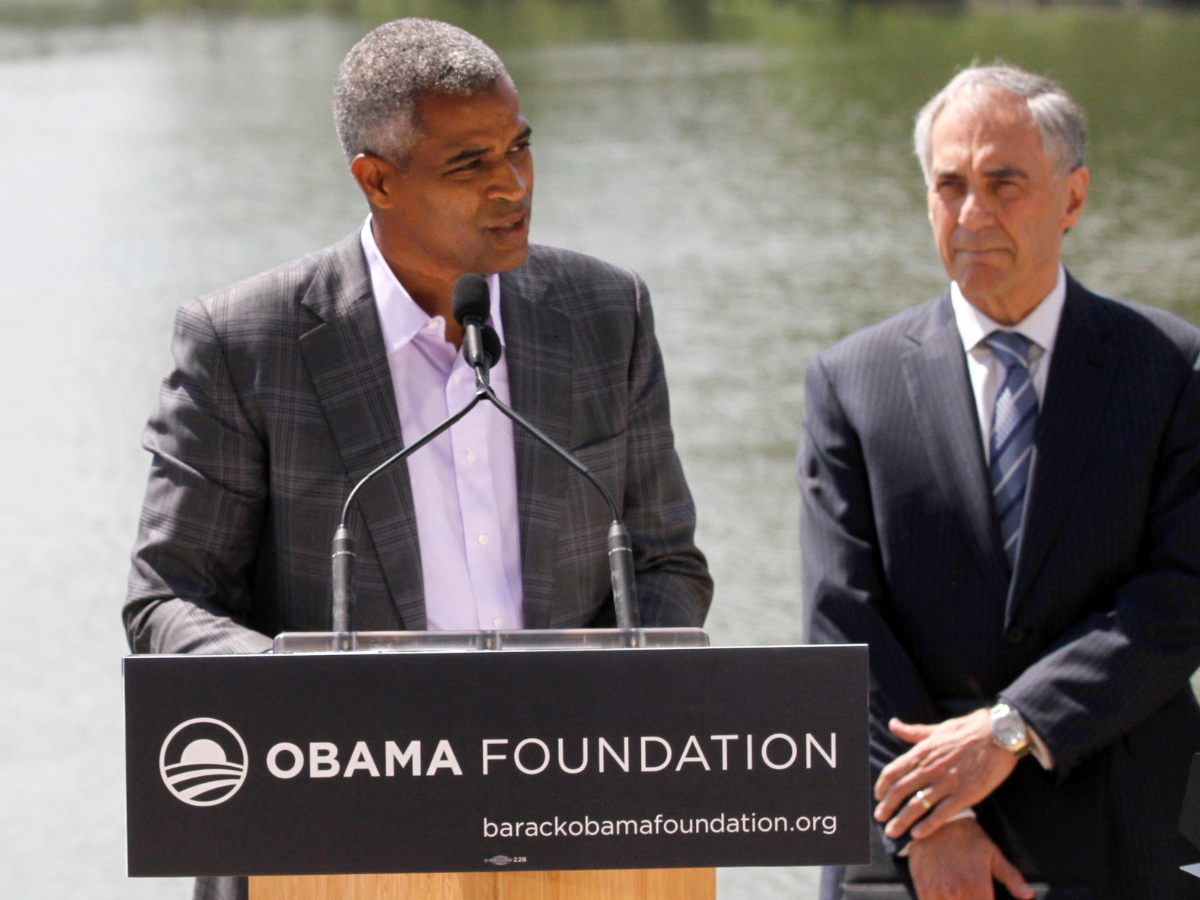 The lawsuit has raised curious political and racial implications.

“Former President Obama has made it known that he intends to use his Center as a ‘bully pulpit’ to continue his political activities by raising money for the Democrat (sic) Party, endorsing individual candidates for election, speaking out on controversial partisan political issues, and being outspoken in critiquing the actions of succeeding presidents and elected members of Congress with whom he disagrees,” the complaint said. The city responded to that assertion by pointing out the center will not engage in partisan activities per federal laws governing the Obama Foundation.

The plaintiffs are mostly white and do not live in the communities closest to the site for the presidential center or the South Side, which irks some neighbors who point to a racial dynamic they call patronizing. The lawsuit asserts the South Shore Cultural Center, located about one mile south, essentially provides the same social services that the presidential center would provide. The city denies that.

Though he’s not named in the lawsuit, political gadfly George Blakemore, an African-American who has long railed against the city’s Democratic leadership as plantation politics, is listed as a director for Protect Our Parks on its most recent tax forms.

Distrust, displacement, and other challenges

While the concept for the presidential center has changed and the University of Chicago is no longer a formal academic partner as suggested in the proposal, elements of the proposal raised eyebrows for people who don’t trust the university or another proposed project for the area. A PGA-level golf course designed by Tiger Woods would merge the current golf courses in Jackson Park and South Shore.

That’s in part why the Obama Community Benefits Agreement coalition is collecting signatures to put a referendum on the February ballot asking residents if they want their aldermen to introduce an ordinance for a community benefits agreement or CBA. Organizers plan to target sections of the 5th and 20th wards, areas closest to the proposed presidential center. Ultimately, activists want written guarantees of affordable housing and a property tax freeze. The city council ordinance passed Wednesday for the land deal says that the city recognizes the potential for displacement and will closely monitor property values.

“The city council is doing a disservice against the residents of this city with its platitudes that they’re going to monitor property costs or property values in areas. They haven’t built any of the details that would make that statement a real thing. So it just sounds like empty statements,” said Jawanza Malone of the Obama CBA coalition.

A WBEZ analysis of 2,430 properties in East Woodlawn — between Cottage Grove and Stony Island avenues, and from 60th to 67th streets — found that the city and its sister agencies, like the park and school districts, own the most property in the neighborhood. The city owns most of the open space along 63rd Street.

David Reifman, commissioner for the Department of Planning and Development, said the city will design a way to monitor property values within the next month.

“How we are going to build community wealth and provide amenities for residents and be sure that we do that in a manner that is feasible. It’s not simply monitoring it to monitor it but how we can best address what has come out of the community process so far,” Reifman said.

He also said the city is not selling any of the land in Woodlawn, and will eventually have plans to release a request for proposals for the land it owns in Woodlawn, including three closed schools. The department has hosted community meetings this summer.

The pushback against the presidential center has some residents worried. Earlier this month, a volunteer group called Southside Neighbors 4 Hope formed to offer support.

“What the [presidential center] represents and what the Obama Foundation represents is completely missing. If you look at that center and what’s going to be available as resources is phenomenal,” said Erin Adams, a founder who lives in South Shore.

The Obamas have expressed a vision for a South Side museum campus in historic Jackson Park by closing Cornell Drive, a heavily-trafficked thoroughfare that winds through the park, which the city council also approved on Wednesday. Michelle Obama, a South Shore native, advocates for a garden, sledding, and public art for the presidential center. Barack Obama envisions speakers like Chance the Rapper, Spike Lee, and Steven Spielberg giving workshops for young people, promising the center won’t be a boring museum experience.