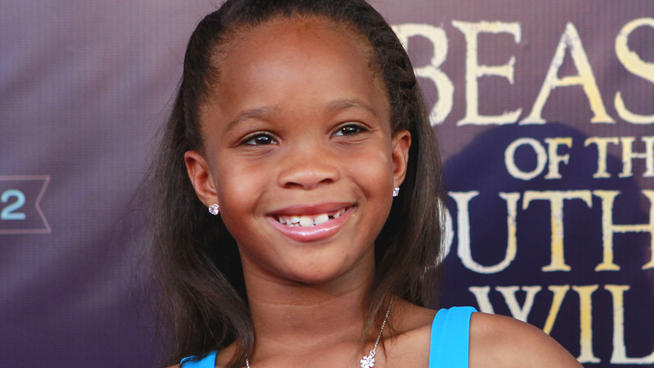 If there’s one thing I’m disappointed by at this year’s Oscars, it’s that no one’s going to be talking about what a spectacularly bad outing Seth MacFarlane had as his first time as host. The Family Guy creator and pop culture shock jock played down to the worst expectations of him, peddling in off-color (and even worse, stale) jokes about everything from Mel Gibson to pedophilia, eating disorders and domestic violence. Those jokes weren’t edgy when Ricky Gervais tried them three years ago at the Golden Globes, and we didn’t have to listen to Ricky sing. MacFarlane’s shtick set a mean-spirited tone for an endless ceremony that should have been ebullient and joyful, capping with Ben Affleck’s tearful redemption. Remember when Ellen DeGeneres charmed the pants off America (and Martin Scorsese)? I miss that.

But like the Oscars’ virtual Lincoln shutout (none for you, Spielberg!), The Onion quickly stole the limelight away from any dangling criticism of MacFarlane’s lack of emcee skills. After the ceremony ended, the satirical news rag posted the Tweet Heard Round the World—at least the one most complained about on your Facebook news feed. The tweet was swiftly taken down, but not before it was preserved in the internet’s archives by the wonder of screengrabs. The internet never forgets.

I almost don’t want to hit those copy + paste buttons, because they make it real again, but here goes. Deep breath: 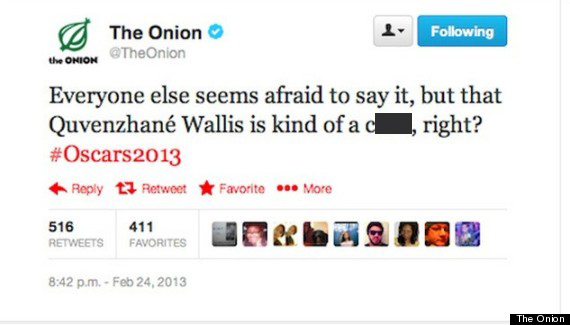 Now, before the internet launches into the “Hey, This Easily Offended Blogger Doesn’t Get Satire" rant, pipe down, Trollie. I absolutely adore The Onion and look to them as a beacon of sanity in the world. Like John Stewart and Stephen Colbert, their use of humor allows them to speak truth to power in a way your Average News Media Bear doesn’t, pointing out the blatant hypocrisy and absurdity of daily life. Although their headlines and news articles are satirical fun house images of our news cycle, they often seem more real than the actual news. This is why a growing number of “The Youths” (referred to in different corners as "Millenials," "Twenty-Somethings" or "Those Crazy Kids") rely on them as news sources. It might not be fact, but The Onion feels real.

Despite the outlet’s role as satire, this is why the tweet hits so close to home for many readers—because a) it feels like a violation of a sacred contract and b) it's a horrible thing to call anyone, especially a child. As Onion lovers, we rely on them to sort out the media’s bull, not add to it, and this tweet is a big, steaming, festering pile of fibrous cowdung, so much so that you imagine Bret Easton Ellis out there cackling in delight. You could run out of words describing how awful this tweet is, so we’ll make a Scattergories round out of it. How many words can you find that describe The Onion's comment? All of them have to begin with the letter V. You have thirty seconds. Go!

Because I’m an optimist, I’d like to believe that the tweet was meant to be a critique of media sensationalism on Oscar night, particularly the ways in which we attack celebrities as a national sport. Seconds after the Oscars ended, websites were posting their worst-dressed lists, throwing out canned punchlines about Salma Hayek’s dress, Norah Jones’ hair and what Jane Fonda could have been thinking. Anne Hathaway gives a tearful yet composed speech, showing her grace under pressure, and people instinctively roll their eyes at her, trained to believe that anything Anne Hathaway does is fake. The moment Kristen Stewart walked out on stage with Daniel Radcliffe, everyone at my Oscar party erupted in scorn, shouting to get off the stage. The question isn’t why we hate her so much, but what purpose this hatred serves.

However, bringing children into this media discourse of celebrity shows just how disgusting and damaging that culture is. (New Scattergories round: Describe the media’s treatment of women with the letter D. Three seconds. Go!) This is likely what The Onion was trying to do, using the vilest word they could think of to describe a child, a tweet meant to make us think and reflect on what we mean when we bash celebrities. I’m sure a bunch of people went to instantly retweet The Onion (because celebrities terrible funny ha-ha), but then read it and had to ask themselves, “Wait, what?” This tweet disrupts the expected narrative.

But the problem is that Quvenzhane Wallis, the most adorable nine-year-old I’ve ever seen, deserves to be taken out of the crossfire. Although the tweet banks on her insouciant innocence and precociousness, she’s not an abstract concept for critique. More than an actress, she’s a real little girl who needs to be left alone. The cases of Lindsay Lohan and Drew Barrymore showed that the spotlight can have deleterious effects on young peoples’ identities, and rather than critiquing that, it looks like The Onion is affirming the fall from grace. It's sorry satire that gets mistaken for its intended target.

The media's war on girls is not new. Last year, the internet erupted with criticisms of Willow Smith’s hair, alleging that it was inappropriate that she made the decision to cut it herself. Critics argued that as a preteen, she shouldn’t be allowed to make her own style choices, or she’ll end up dressing like Milla Jovovich in The Fifth Element. Not that there’s anything wrong with Gautier.

Jada Pinkett Smith lambasted the media patriarchy with a Facebook post that bluntly and smartly educated America on a girl’s right to choose her own identity and why we all need the agency to define ourselves. It’s especially important in this case—because Quvenzhane Wallis is a young woman of color in an industry where non-white actors are treated like second-class citizens. If you needed proof of the industry’s tortured relationship to race, notice that they played the score to Gone with the Wind after Taratino’s screenplay win for Django Unchained. They celebrated a cinematic critique of cultural racism by smothering it with racism. I’d like to take this moment to thank the Academy for being clueless. They're like the old, racist uncle we're forced to spend time with once a year.

As a woman in that industry, Quvenzhane Wallis will further feel this pressure—in an industry that expects women of color to pick fights with each other onscreen, to be a Real Housewife, to act like Nicki Minaj and Mariah Carey and to sell out her talent for the lowest-common denominator. It’s telling that a black actress won last year for serving someone a poop pie, but not leading up an ensemble with poise and grace. It’s even more telling that when Jessica Chastain is asked about the film, interviewers most often want to know about catfights behind the set, seeking to further a narrative where women tear each other apart for entertainment. We want Hollywood to be like an episode of Revenge.

"I find it very sad that the media makes up bogus stories about women fighting in this industry. Filming The Help was the most amazing experience...Why do we support the myth that women are competitive and cannot get along?...Please don't allow the media to perpetuate the myth that women aren't supportive of each other. Every time an actress is celebrated for her great work, I cheer. For the more brilliant their performance, the more the audience demands stories about women. With support and encouragement, we help to inspire this industry to create opportunities for women. And as we all know: a great year for women in film is just a great year for film."

As the first prominent young actress of color, Quvenzhane Wallis is going to have to fight for a place in Hollywood, where no one ever called Dakota Fanning a c-word or asked for clarification on Abigail Breslin's name. However, it's also our role to lift her up and celebrate her.  The Academy Awards are supposed to be about showcasing art’s power to challenge us and push us, yet it too often devolves into “hostile, ugly and sexist” garbage like this, highlighting competition over achievement. At the end of the ceremony, Seth MacFarlane (with an assist by poor Kristen Chenoweth) even took a minute to mock the losers in a musical number, which says more about MacFarlane than it does Amy Adams. Remember: this is the guy who makes Aquaman rape jokes for a living.

Not wanting to outdouche Seth MacFarlane, The Onion swiftly apologized this morning, rather than attempting to run away from the disaster in slow-motion, like in Dante’s Peak. The Onion recognized that not all humor is created equal and instead of hiding behind a veil of being un-PC, they recognized the tweet as a “senseless, humorless comment masquerading as satire.” In doing so, The Onion took a moment to reflect on what its language means and showed that our rhetorical choices have consequences. They took responsibility for being part of the problem, rather than singing and dancing around it. You'll never see that from Seth MacFarlane.

Ironically, by being offensive, misogynistic and possibly racist, The Onion might have given the Oscars the best headline imaginable. Next year, let's check out the Razzies instead. At least they're honest when they say they're celebrating the worst.