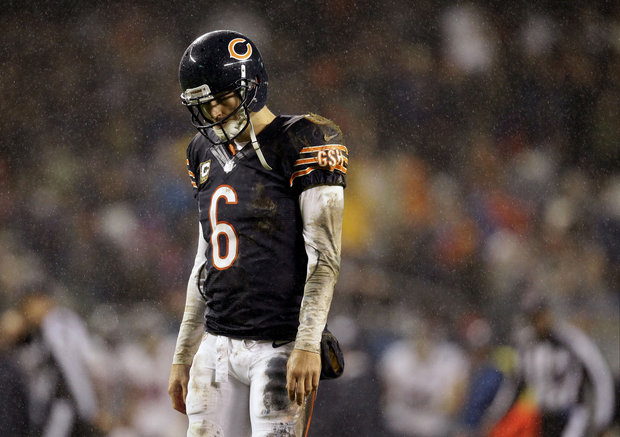 Sitting NFL players with concussions is a no brainer. So why isn’t it mandatory?

Last Sunday the league had three starting quarterbacks get "knocked out" of the game: The Bears' Jay Cutler, San Francisco's Alex Smith and Philadelphia's Michael Vick. Smith has already been cleared to go back on the field. On Friday, the Bears announced their decision to rest Cutler and start Jason Campbell in the game against San Francisco Monday. There is still no time table for when Cutler will be able to return.

I'm glad the Bears have decided to rest Cutler. When a player is concussed, the question about whether he should play the following week should be simple — no. Not maybe, not "waiting for medical evaluations" — it should be a flat no. The NFL has made a lot of noise with their concerns for concussions, but not enough. When a player has been removed from a game or is diagnosed with a concussion after a game he needs time to recover before any new physical contact. A rule should be in place that bars the player from the next game. Period.

I don’t want to hear that injures are “part of the game,” please. This kind of injury can — and will — complicate a player’s health, and possibly their future, if it's not treated the right way. This is not like an ankle or knee injury; they need legitimate time to recover from a brain injury.

Recovery time will vary since the severity of the injury will vary. But give the players at least 10 to 14 days to recover. We know from Cutler’s past history that he had one concussion two years ago with the Bears and suffered others in college. That’s one too many to take any chances with his career — and his future. We've seen the effects repeated head injuries have had on former players, notably Jim McMahon. He is now suffering from early dementia.

As to that hit Jay Cutler took, by many accounts it was a “clean” hit by Houston’s Tim Dobbins. Really. Then why did the league fine Dobbins $30,000? The NFL should have fined him for gloating about taking down Cutler after the game, too. And while they're at it, the league should add long suspensions to players who sack that way. Players will shrug off the money — playing time not so much.

Football is a game of hitting; there is no denying that basic aspect of the game. But the manner in which it's done and the ferocity of the impact it still a problem for NFL Commissioner Roger Goodell and the league. The concussions are not decreasing and must be dealt with, especially for the sake of the players' futures. So why not have the players miss a minimum of one game? Winning can’t be everything — or wait. In this league it is.

This article was updated to indicate the Bears' decision to rest Culter.