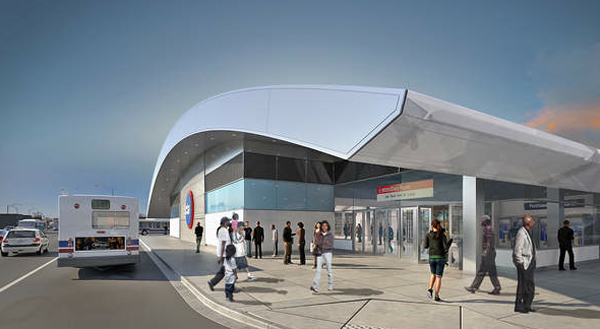 The CTA's 95th Street Red Line station has long been one of the biggest missed opportunities in the city.
Hovering above the mighty Dan Ryan, the big terminal handles 20,000 riders a day and 13 bus routes — including Greyhound — feed into it. Yet station has almost zero amenities and feels cramped despite its relatively large size.  Not to mention the once-groundbreaking station — the modernist Dan Ryan portions of the line were designed by SOM — looks every bit of its 43 years. Furthermore, its hard angles, encampment-style steel fencing and utilitarian canopies are a visual fist in the face of the surrounding community.
Given its location and use, the station should function as hub rather than a funnel. So preliminarily, at least, this week's announcement that the terminal is in line for a $240 million upgrade is good news. The above image shows a concept of what the exterior of the terminal could look like. Other images show a wide glassy interior concourse and other spaces.
But this is about more than prettifying an "L" terminal. Done the right way, the redo could turn the station into a real amenity with small shops and well-planned interior spaces that could make the experience of catching a train there pleasant--not to mention quieter and safer.
Along with the next year's planned repairs that would significantly increase train speeds on the line's south end (and the proposed Red Line extension to 130th) a revamped Red Line could knit together parts of the vast South Side and efficiently link those neighborhoods to downtown and beyond.
The devil is in the details — as always. There needs to be discussion and community input to deterimine the station's look, feel and function. And here's hoping the places immediately surrounding the station — particularly the sad-looking gas station and hot dog stand to the east and the lumpy and pedestrian-unfriendly stretch of 95th Street outside the terminal — can be improved. And a park-and-ride facility is also badly needed.
But as an opening bid, the new station is a good one.