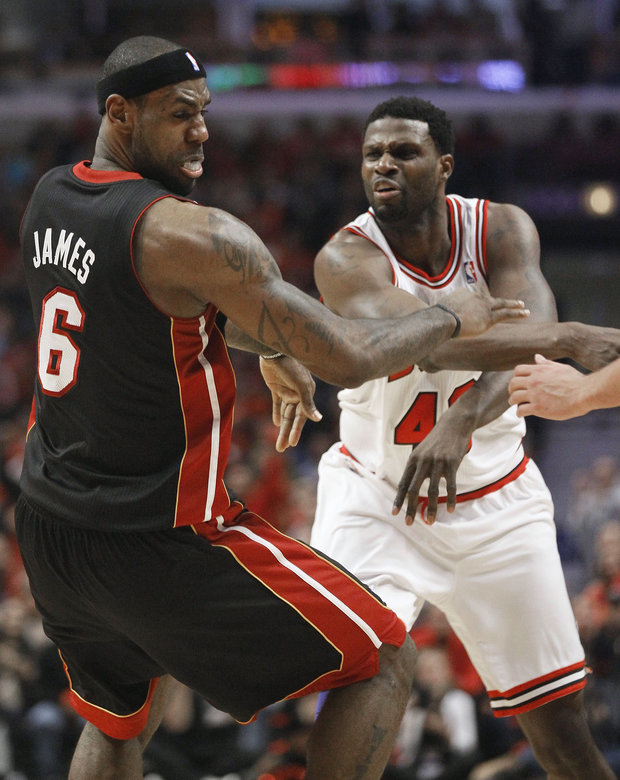 It is not an overstatement to say the Bulls face a must win game Monday night against Miami. Chicago is down two games to one, and it is likely going to be another physical, tough game at the United Center.

It has also been a costly series for the Bulls so far. Coach Tom Thibodeau is $35,000 dollars lighter after his negative comments about the officiating last Friday. Taj Gibson had to cough up $25,000 for his dispute with referees in the second game.

There have been three Bulls players ejected from the last couple of games. The perception is this is a whiny Bulls team. When you look at everything they have dealt with this year, it is more like they are fighting to stay alive in the playoffs.

Nothing has been easy for them and facing the Miami Heat that is healthy and loaded with talent has been difficult. The hurdles they have dealt with would have weakened the resolve of most teams. The Bulls can not afford to lose the war with the officials. They must remain level-headed.

Luol Deng is still struggling with his health after his spinal tap. Kirk Hinrich is not seeing much improvement on his bruised calf. Of course, you have to mention (and would rather not) Derrick Rose is unavailable.

Can this Bulls team win another game in this series?

You cannot rule them out, but they are treading on thin ice if they don’t win tonight. Being home and knowing they were in the game last Friday magnifies the urgency to take advantage of favorable opportunities.

Having two days off between games may help the Bulls. At this point, you have to grasp at straws to find any positives.

Bring on the Red Wings

The Chicago Blackhawks now know who they will meet next in the Stanley Cup playoffs.

Late Sunday night the Detroit Red Wings finished a seven game series on the road in Anaheim with a 3-2 win. What a great matchup in the second round: two of the original six NHL teams meeting. It’s particularly interesting because next season Detroit will move to the Eastern Conference.

The Hawks have home ice advantage and the first two games of this series will be played at the United Center. During the regular season, the Hawks beat the Red Wings in all four meetings. Since finishing off their first round series last Thursday, the Hawks have been able to mix rest with intense practices. Intensity was the magic word used by players at their practice on Saturday. Knowing it is Detroit will make it easy to dial it up a notch entering the next round.

The Hawks will have more players at their disposal. Coach Quenneville says he will have Ray Emery and Dave Bolland back from injuries.  Bolland is known as someone who can get under the skin of his opponent.

Emery’s return is good insurance to back up Corey Crawford between the pipes. Crawford is coming off a stellar first round and to have the Hawk fans back in his corner is an added bonus. There is no question that Crawford is more confident having that first series win under his belt. But if he falters (which seems unlikely), Quenneville will not hesitate to go with Emery.

It will be interesting to see if the Red Wings are worn down from their seven game series or if they have momentum from their series opener. Either way the Blackhawks will be ready, willing and able to meet the Detroit Red Wings. This is match-up the fans will definitely love.