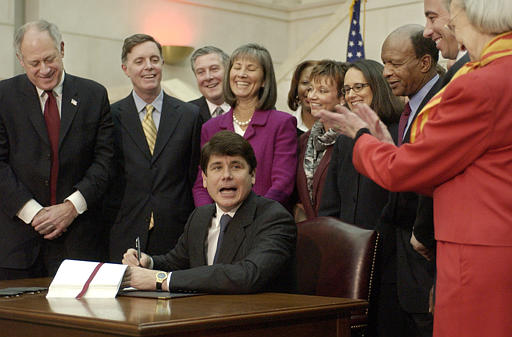 Lead story: While, as the old saying goes, “Chicago ain’t ready for reform,” it seems the rest of Illinois is. A poll released [PDF] by the Paul Simon Public Policy Institute at Southern Illinois University shows that, actually, Illinois is ready for a variety of political reforms. As Rich Miller breaks it down for Capitol Fax, the survey of nearly 1,300 registered voters comes down hard on state businesses, with 62 percent saying they think corruption in business is widespread. But even more – almost 77 percent – think there’s widespread corruption in state government. (I have no idea where those other 23 percent have been living the past five years.) Other tidbits:

The entire poll is a fascinating peek inside the state and is certainly worth a read — it also explores issues like the Citizens United case and caps on campaign contributions. Meanwhile, Derrick Smith still has a chance of being elected.

Also: Rejoice! Sing praises to the sculpted arms of Ed Hochuli! Bring only the finest meats and chesses to our bacchanal, for the real NFL referees are returning to the field this weekend. While talks had already been scheduled for this week, the Sh*tstorm in Seattle – a game with such bad refereeing that gamblers got their money back – certainly expedited negotiations. Thanks ot the agreement, the refs will be back in time for tonight’s Cleveland-Baltimore tilt.

And then: I know I’ve been pretty harsh on Mayor Emanuel’s tenure so far, but one thing he’s managed to do is put a big dent in the enormous budget gap Richard M. Daley left for him. While the initial projections were in excess of $600-700 million, it looks like Rahm’s aggressive approach has slashed that in half: Now the projected gap is only (yes, “only”) $298 million and Rahm got us here without raising taxes. However, Emanuel’s hinted that a hike on cigarette taxes could be coming when he presents his budget plan to the City Council in two weeks.

RIP: Andy Williams, singer and television personality, at the age of 84 after a battle with cancer. Even though he recorded 18 gold and three platinum albums, only one song, "Butterfly," reached number one. But that's hardly a sign of Williams' popularity: so many of his songs, including "Where Do I Begin," and, of course, "Moon River," have earned a place in America's music canon. Williams also hosted a popular television variety show and, for decades, regular Christmas specials that became a staple of the later part of his career.

More information than you ever wanted to know about toilets.