Every time Pope Francis washes the feet of prisoners, embraces an orphan, speaks of social justice and "the least of these," it reflects the Catholic Church as I would like it to be, the church of the Scriptures. Pope Francis has not altered doctrine or dogma; yet words and deeds have their own kind of power. His U.S. itinerary includes stops at a Harlem school and a Philadelphia correctional facility. It's a visit that may bring me closer to a faith that has not always been so welcoming to black Catholics like me.

"I think Pope Francis' message is a challenging one for the kinds of Catholics we have here in America, who have bought into a kind of Evangelicalism which isn't Catholicism," says Anthea Butler, Associate Professor of Religion and Africana studies at the University of Pennsylvania. "I think it rings true for black Catholics because of his focus on justice, poverty, and liberation."

It certainly rings true for someone like me who sees being Catholic as an essential part of being myself. When you are baptized with the name your late grandmother carried, Mary Cecelia, Catholic is with you before you learn the rosary or make your first Communion. But being black and Catholic — something I never thought much about in my early years — means inheriting a complicated legacy. 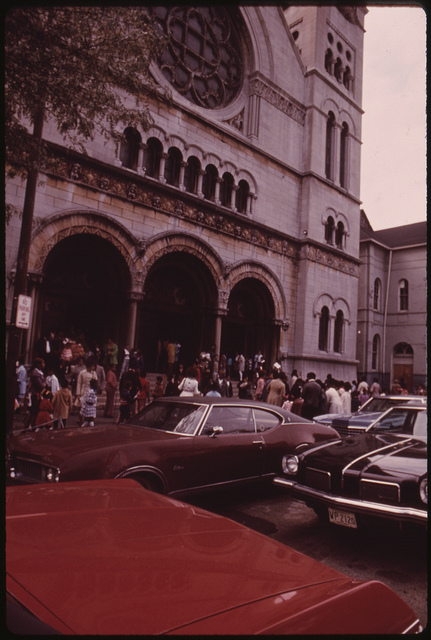 In my home state of Maryland, which was colonized as a refuge for persecuted Catholics, the faith was locked in for many enslaved African-Americans, beginning in the 17th century, a custom that extended to other parts of the young country. "Many enslaved Africans became Catholic if imported through New Orleans under French rule 'code noir,'" Butler explains, "which required slaves purchased to be baptized in the Catholic Church within seven days of purchase."

For centuries, not only did the Catholic Church bless slaveholders, in some cases, it joined their ranks. Cecilia Moore is an Associate Professor of Religious Studies at the University of Dayton, a Catholic research university in Ohio. Moore, herself an African-American Catholic, has researched black Catholic history and has taught at Xavier University of Louisiana's Institute for Black Catholic Studies. She notes that religious orders like the Jesuits ignored church law on slavery, and held slaves themselves, who worked as servants and on the community's farms.

Despite Pope Gregory's 1839 condemnation of the slave trade, Catholic loyalties in the Civil War often split along regional lines, with the archbishop of New York John Hughes supporting the Union and consulting with President Abraham Lincoln, while the Charleston, S.C., bishop Patrick Neeson Lynch, was sent by Jefferson Davis to meet with Pope Pius IX in a failed attempt to get him to recognize the Confederacy.
To be sure, the church could also be a force for equality in America, from the work of Mother Katharine Drexel (now a saint) in funding and founding black Catholic schools and parishes in the late 19th and early 20th centuries, to the actions of North Carolina Bishop Vincent Waters to integrate schools and churches in 1953, a year before the Supreme Court's Brown v. Board of Education decision.
That spirit of inclusion was not something the larger church always embraced, even on Sunday mornings. "Segregation in the Catholic church was prevalent, especially during the Jim Crow era," says Butler. African-Americans were often forced to sit in separate sections of churches and barred from altar service or taking communion. "We still have people who have living memory of the ways in which they were segregated in worship," says Moore. Still, many black religious and lay leaders never lost their faith or activism, with black church organizations offering support throughout the church's history in America.

Religion and politics, while never separate, became as tangled as they could be in Baltimore in the 1960s and 1970s – a time of turmoil and tension to spare. This is when the Church's complicated history with race became part of my own story. I remember the heroism of Lawrence Cardinal Shehan, Archbishop of Baltimore – soft spoken and small in stature – who demonstrated at the March on Washington, ordered desegregation of schools in the archdiocese in the 1960s, and was jeered when he testified in favor of open housing legislation. 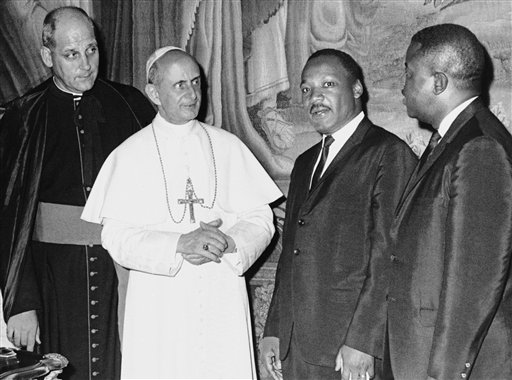 But I also remember how segregation marred Catholic schools, and what that meant to my family in the 1950s and 1960s. My oldest brother passed rigorous entrance exams for Catholic high schools in Baltimore with flying colors. But he never got to attend; priests and school administrators explained that had my brother been white and non-Catholic, he would've been accepted. With the persistence of my devout and active Catholic mother, who persevered through her hurt, he was accepted to a Catholic high school in Wilmington, Del., which was integrating. That meant a daily early train commute from Baltimore to Wilmington, about an hour one way; he never missed a day and graduated with high honors, second in the class.

"We still have people who have living memory of the ways in which they were segregated in worship." -Cecilia Moore, Associate Professor of Religious Studies at the University of Dayton

Just a few years later, things had changed...somewhat. When I graduated from an all-black grade school, taught by the Oblate Sisters of Providence, a black order of nuns founded in Baltimore in 1829 to teach children who looked like me, I passed those tests, just as my brother had, and was allowed to enter an all-girls Catholic high school where I was in a definite minority.

I developed lasting friendships and survived occasional clashes with white girls from other parts of the city as we worked through petty kid stuff as well as more serious racial resentments that threatened to trump carefully learned lessons of Catholic charity. I found refuge with the other newspaper geeks and Sister Mary Augustine who welcomed anyone willing to write or edit a story. In my senior year, I shared editor duties with a white classmate who is still a friend. The teachers were often the bigger problem. The day I registered for classes, the nun in charge looked at my face, and pulled my mom and me aside halfway through the process. It never occurred to her that the Mary Cecelia whose test scores put her in honors courses could look like me. She explained that while I qualified for gifted classes, I might want to start in a lower group until I could handle more advanced work. After exchanging looks, my mother and I assured her I would be fine. That nun, who later would become my honors algebra teacher, remained bewildered by my success. "Are other people in your family smart?" she'd ask me.

The Church has come a long way since my childhood, even before Pope Francis. In 2010, when the National Gathering for Black Catholic Women met in Charlotte, N.C, where I now live, hundreds of women traveled from across the country for fellowship dedicated to "remaining Catholic while remaining authentically black," as one attendee put it. My sister – following my mother's example — was one of them. She worships at a predominantly black parish in Baltimore that was all-white in my childhood and changed with the neighborhood. Now, with a black pastor, the vibrant services incorporate soulful music and praise dance.

Worldwide, the black Catholic Church is changing, too. According to the National Black Catholic Congress, Catholics of African descent represent almost 25 percent of the one billion Roman Catholics throughout the world in more than 59 countries.

At Cecilia Moore's predominantly black parish in Dayton, many of the younger parishioners are from Ghana, with others from Nigeria and Rwanda. "We're getting older, and the young people of African descent tend to be immigrants and the children of immigrants," she says, noting that the number of white American Catholics has long been in decline. "When we take a picture of the U.S. Catholic Church, it's going to be very black and brown," Moore explains, adding that the U.S. church is increasingly dependent on foreign-born priests — maybe from Africa, India, the Philippines or Ireland. "America is kind of a mission again."

So, you could say Pope Francis is doing missionary work, recognizing that the church needs to embrace members of color to survive. Or maybe he's just getting back to basics. "He has the common touch, that is the ability to relate to people, to be with people to enjoy their company, to listen to them," says Moore. "It feels so relatable and relational; every time he does that he reminds all of us that the church is so much wider than what we think we know it is. ... He surprises us."

Pope Francis' message has surprised me. He looks to the future of the church by sharing a message that harkens back to the small and inclusive world that once made me feel very much at home in church. Even from a distance, I will be listening.

Mary C. Curtis is a journalist in Charlotte, N.C. She has worked at the New York Times, the Baltimore Sun, the Charlotte Observer, as a national correspondent for Politics Daily and was a contributor to The Washington Post. Follow her on Twitter.