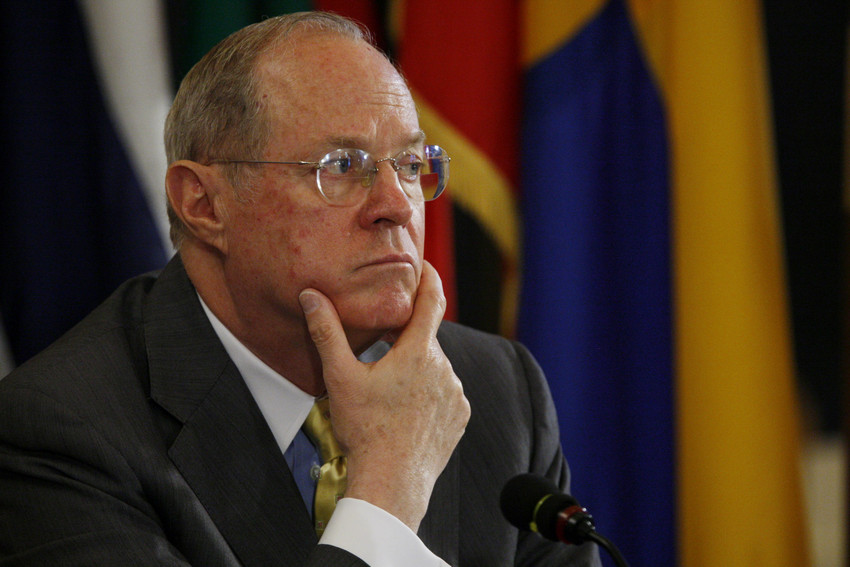 The weirdest part of this morning’s arguments on Prop 8 before the Supreme Court is that everybody -- including the lawyer representing Prop 8 backers -- seems to think same sex marriage is an inevitability, but that the court’s duty is not to hurry it along.

“Consider the California voter, in 2008,” said Charles Cooper, the attorney for Prop 8’s backers, “in the ballot booth, with the question before her whether or not this age-old bedrock social institution should be fundamentally redefined, and knowing that there’s no way that she or anyone else could possibly know what the long-term implications of -- of profound redefinition of a bedrock social institution would be. That is reason enough, Your Honor, that would hardly be irrational for the voter to say, I believe that this experiment, which is now only fairly four years old, even in Massachusetts, the oldest state that is conducting it, to say, I think it better for California to hit the pause button and await additional information from the jurisdictions where this experiment is still maturing.”

And what’s the rationale for the slowdown? To see if same-sex marriage is working?

Here’s my question: How in heaven’s name would that be measured?

The arguments put forth by Cooper were, frankly, stunning to me. They center mostly on procreation.

“The concern is that redefining marriage as a genderless institution will sever its abiding connection to its historic traditional procreative purposes, and it will refocus, refocus the purpose of marriage and the definition of marriage away from the raising of children and to the emotional needs and desires of adults, of adult couples,” Cooper said.

But doesn’t that actually sound like what modern marriage already is? Hasn’t that redefinition already taken place among heterosexuals without any influence from the debate about same sex marriage? Hasn’t industrialization and feminism already made “the emotional needs and desires of adults” the focus of modern marriage?

And because the case is based in California, where adoption is permitted to same-sex couples and where both partners in same-sex couples appear on the birth certificate of biological children, how does same sex marriage affect procreation and, specifically, procreation in traditional heterosexual families?

Still, this morning’s proceedings suggest that the decision -- if there is a decision -- will likely be split and narrow. While it’s fair to say that Justices Elena Kagan, Sonia Sotomayor, Ruth Ginsburg and Stephen Breyer seem ready to toss the totality Prop 8, Justice Anthony Kennedy, possibly the most anguished of the justices and the necessary vote in either direction, seemed a bit reluctant. (Kennedy is also the author of the only two Supreme Court decisions to affirm rights for gays.)

It was Kennedy, in fact, who today specifically brought up the ruling by the 9th District Court, which determined that Prop 8 improperly denied a right granted to same sex couples by the California Supreme Court. If the justices choose to uphold that verdict, the dismissal of Prop 8 would apply only to California and have no bearing on any other state. In other words, it would be a way of avoiding affirming a constitutional right to marriage for same-sex couples.

But there is also a chance -- slim but present -- that the case might be dismissed based on standing. That is, that the backers of Prop 8 do not have right to defend it before the court because the state of California itself -- meaning the governor and the attorney general -- have chosen not to defend it.

This last scenario would have multiple effects: One, it would toss out Prop 8 but without setting precedent. And it would hurl California’s ballot initiative process into chaos.